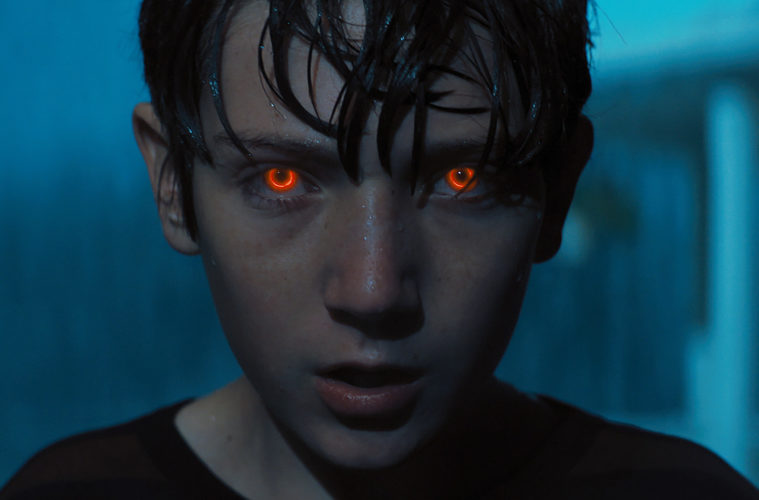 ‘Brightburn’ Review: A Grim, Gory, and Illogical Retelling of the Superman Myth

Brutal and bludgeoning, David Yarovesky’s Brightburn is a film designed to knock the breath from your chest and subvert expectations. An alien infant crash-lands to Kansas. A childless couple yearns for a baby. The humans come across the tiny spaceship and raise the alien-who-looks-like-a-human as their own. If you think you’ve heard this story before, that is not the case. The script (written by both Brian and Mark Gunn) is an inventive, if illogical glance at the Superman myth, a ‘what if’ re-telling of a situation we all assume we’d handle correctly.

So do Kyle (David Denman) and Tori Breyer (Elizabeth Banks). The opening shots of infertility books, loving photos, overalls (his) and a Ramones t-shirt (hers) is as much character background as we learn about the Breyers. Following a crash outside and a red light in the distance, the film breezes through the alien baby’s early years, showing us nostalgic home videos in which he appears stultifying normal. We never get a look at possible aberrations within the child, which would have been an excellent way to develop character or signal a mental schism. It’s not until he’s a preteen that we properly meet Brandon (Jackson A. Dunn), who enjoys helping his father and playing a game of hide and seek with his mother that seems a bit off, given his age. He’s given nothing interesting in the way of personality except for when showing off a detailed memory of insect processes in science class.

This may be the point—that Brandon is a blank slate until activated, but one wishes for more footage of him amongst his contemporaries or mention of past instances. Did he never exhibit cruelty or anger prior to the events of the film? Brandon doesn’t so much go from sweetheart to villain as much as he goes from boring cipher to psychopath. Things change once something red and pulsating speaks to Brandon from the barn, providing awareness of his abilities and true disposition. His drawings of a strange logo and red eyes set a turn for the worst. He may at first only accidentally toss a lawn mower across a field but soon boasts of his superiority to the citizens of Brightburn. It becomes clear to the audience, and his school-crush, that something is very wrong. The Breyers tiptoe around the young now-sociopath, nervous to ask questions or share news of mishaps for fear of his rage, his horrifying misaffect, or acknowledgment of their possibly poor choice to raise an inhuman child.

Banks, always a nuanced performer, is given the difficult role of a mother who refuses to see the truth until bodies pile around her. It’s with some annoyance that we watch her insist on Brandon’s vicious assault on a young girl as some kind of accident. How does one accidentally squeeze a child’s hand and arm until it breaks? Everyone in the gym class witnessed the event yet the script gives supporting characters very little in the way of agency. More illogical decisions pile up when it comes to the family, such as keeping the alien craft fifty feet from their house and hoping the child never finds it, as well as joking about an unsettling series of magazine photos stapled together and stuck under Brandon’s bed. Women in underwear might not be strange reading material for a preteen boy, but when those women are headless and followed by shots of torsos, internal organs, and blood, it might be time for an intervention–not that it would matter here. Dunn excels in evasive mode, using his widely-set hazel eyes and freckles to misdirect, and is truly fantastic when at his most sinister. His blank face keeps both the audience and Breyer family on edge. More than mere ruckus is caused by Brandon’s transformation: when a particularly nasty encounter happens within a diner, the tension almost unbearable; a little girl’s bedroom becomes the stuff of nightmares; even being the object of Brandon’s affection isn’t a great role to occupy.

Superman, E.T, and Starman have encouraged us to befriend any alien who makes their way onto our property, yet Brightburn delivers another feasible outcome. What if evil had its own superhero? What if no matter how well you raised the boy, he belonged more to his bio-family? In aiming to deliver unexpected terror, Brightburn doesn’t shed light on its antagonist’s backstory. Unlike Clark Kent, we aren’t sure of his circumstances. Unlike E.T, there was nothing accidental about his being on Earth. While Brandon’s background remains hidden under his creepy, red, laced-up mask, we do learn his intentions, and those are more than enough.

Brightburn is now in wide release.