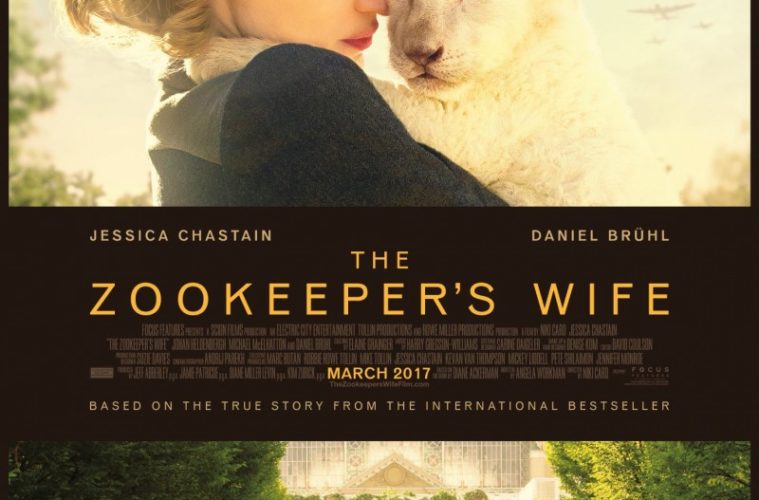 The Zookeeper’s Wife begins with those five famous words that hold the power to either become a film’s dependency (and therefore downfall) or its empowering catalyst, laying the foundation to convey a poignant tale: “Based on a true story.” Fortunately, The Zookeeper’s Wife sticks with the latter, and the true tale being told is one for the ages. Niki Caro‘s drama follows a couple who hide Jews in their zoo and use it as a point of passage and escape during the Nazi takeover of Warsaw. The narrative is a simple one, allowing The Zookeeper’s Wife to shine in its performances, imagery, and storytelling, which it pristinely accomplishes.

The film opens in 1939 Warsaw, where Jan Zabinski (Johan Heldenbergh) and his wife, Antonina Zabinski (Jessica Chastain), operate the Warsaw Zoo. From the opening scene, Chastain’s performance mesmerizes, inserting an undeniable beauty and lightness into a story that is otherwise fraught with horrendous tragedy. Antonina begins her days snuggling with lion cubs, bicycling around the zoo beside a young camel, and forming friendships with full-sized elephants. She is a true caretaker in every sense of the word, and the juxtaposition of Antonina Zabinski’s kindness with the terrors of the Holocaust render this story all the more magnetic. It is Antonina’s gentle interactions with the dozens of zoo animals that make the gun shots that much louder and the Nazi regime that much more monstrous. While credit is, of course, due to writer Angela Workman, Chastain draws us into the narrative with a soft yet commanding performance that is among her finest.

In fact, the film’s entire cast holds its own. After the Warsaw Zoo is bombed and overrun with German troops, Daniel Brühl enters as the villain, Lutz Heck, a Nazi zoologist who is put in charge after Germany’s invasion. A complex and charmingly sickening character, Heck develops an attraction to Antonina, and his persistent advancement on her is an unsettling, impeccably developed arc.

In an effort to help save the lives of Polish Jews, Jan Zabinski begins smuggling them out of the ghettos in a guise of collecting garbage. Shira Haas plays one of the Jewish girls in hiding, doing so with such conviction that she’s a stand-out in the ensemble. Even long after Haas begins hiding at the zoo, following a presumed rape in the Warsaw ghetto, she remains a wounded and closed-off character that encapsulates the psychological terror imposed upon the Jewish people during World War II.

Along with the commendable performances, The Zookeeper’s Wife excels in balancing the subtleties of skilled filmmaking with the enormity of the story at hand, creating tension throughout with haunting imagery. A scene that showcases the forced breeding of two bison is one of the most tense moments as Lutz Heck wraps his arms around Antonina while she holds the female bison’s rope, reflecting the animals’ forced sexual relations in the two main characters’ body language. The scene hardly contains any words, yet it is one of the most affecting and intentionally repugnant moments.

In another extraordinary scene, a Jewish boy in hiding at the zoo proclaims it’s snowing outside (despite the warm weather), and when Antonina makes her way to her balcony, it is not snow, but burning ashes falling from the sky as the city’s Jewish ghettos are being burned down. Caro’s balance of this swirl of beauty and terror holds throughout.

However, as carefully calculated as The Zookeeper’s Wife manages to be throughout most of its entirety, the film’s ending is lacking. A climactic exchange between Antonina and Lutz holds potential, but ends up playing out in a tired and conventional way. Rather than release the building tension in exhilarating fashion, there’s an inspired unveiling on the part of Antonina, which results in a finale that doesn’t keep up with the rest of the film that surrounds it.

Backed by Chastain’s stellar turn, The Zookeeper’s Wife is a visually striking experience that will haunt one long after they’ve left the theater. From watching a tiger and two lions walk down the streets of an abandoned Warsaw alley to witnessing Jewish children innocently raise their arms to be lifted onto a train that would bring them to an actual hell on earth, there’s something powerful to be read into every action, line, and image. Subtle yet striking, this is a film that is filled with the power of exquisitely executed storytelling.

The Zookeeper’s Wife opens on March 31.