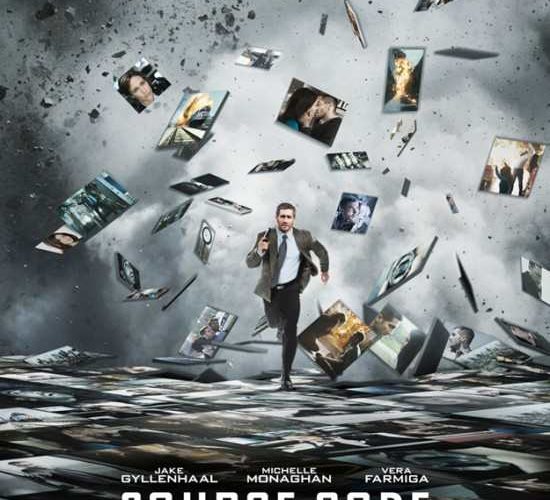 Thank God Duncan Jones didn’t hit the ol’ sophomore slump. Second features always seem to be the trickiest for filmmakers, especially when they’re coming off a hot success, like Jones’ excellent breakout film, Moon. While Source Code may not work on the level that Moon did, that doesn’t mean Jones doesn’t deliver the goods. This is a lean, mean, sci-fi thriller with a few unique ideas in its head. While it may not be as brainy or as hardcore science fiction as many would have hoped, it asks some good questions throughout.

At its core it’s a popcorn film, but one slightly above the average IQ. It’s clever and has distinct concepts, but they all feel secondary to the entertainment factor. With a running time around 90 minutes, the pace runs quick and smoothly. Whenever a certain idea doesn’t seem logical, or make complete sense, the preposterousness passes so quickly that few will be able to critique the logic behind certain plot points.

That rapid pace is both a pro and a con. It’s all fast and all fun, and the speed does certainly add to the immediate narrative. Unfortunately, whenever it slows, even for a moment, it squanders; i.e. the love story.  One of the reasons why The Adjustment Bureau worked far better than it should have was because of the wonderful chemistry created by Emily Blunt and Matt Damon. Leads Jake Gyllenhaal and Michelle Monaghan aren’t capable of achieving that level of authenticity because the script never offers them a moment to, as though it’s afraid of what might happen.

There’s no possible way to question why Colter Stevens would fall head over heels for Christina, but that’s only because she’s played by Monaghan. The actress always has an uncanny sense of charm to her. She’s not attractive solely because of her beauty, but because of that distinct charisma she brings to most roles. But the relationship never adds up to much more than two good-looking people gravitating towards each other because of their appealing looks. And though it’s obviously not Jones’, or screenwriter Ben Ripley‘s, intention, there’s never a meaty or well-developed pull created to make their gravitation towards each other a convincing one. This becomes a nagging issue during the climax, which relies more than a little on their half-baked romance.

If it weren’t for the genuine charms of Gyllenhaal and Monaghan, this could have been a major issue. Gyllenhaal has always been tricky when it comes to compelling charisma. In Prince of Persia, the actor fell flat, but that script didn’t help. In Love and Other Drugs, he went broader at times than he should have. Here, Gyllenhaal finds the sweet spot. Colter Stevens is the perfect type of leading man. He’s brash, vulnerable, funny and everything else we love about heroes like Han Solo. Stevens is not a perfect boy scout. Like Sam Bell in Moon, he has the stampings of an average Joe with average doubts, which makes him more compelling. And, despite there being no physical threat inside the source code, Gyllenhaal still manages to interject a feeling of danger and stakes.

Similarly to Gyllenhaal, the supporting players bring their game. Jeffrey Wright does some impressive scenery-chewing as his Dr. Frankenstein-esque scientist. Wright could have slipped into laughable camp territory causing Rutledge to become a goofy villain, but Wright somehow finds grounding in his eccentric mannerisms and physique. Rutledge is never conveyed as an antagonist. Wright plays him as an ego-centric futurist that’s well intentioned, which makes for an interesting grey area. Vera Farmiga brings a much-needed sense of urgency and gravitas to her expository-reliant role. What could have been a shallow device of a character, Farmiga instead introduces a greatly needed amount of humanity to the role. Farmiga makes the exposition convincing and easy on the ears.

There is a great film in Source Code, but ultimately, it settles for being pretty good. The script doesn’t match the talents of Jones or his cast, which is a chunky chink in its armor. There are unique concepts and thought-provoking ethical questions here, but by climax, it stumbles at the finish line.  Thankfully, the elements that do succeed make for a quasi-intelligent and fun film that Jones can proudly call his own.