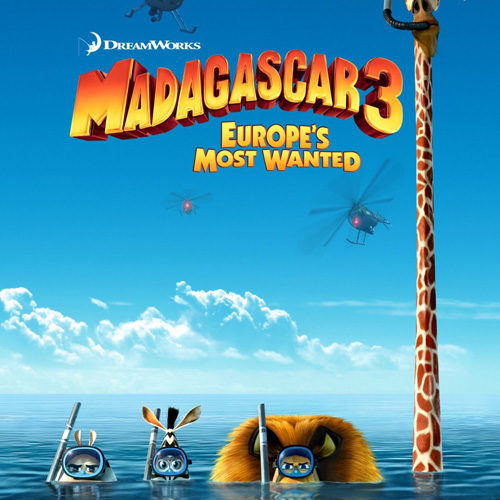 A round of applause for directors Eric Darnell and Tom McGrath—and Conrad Vernon who joins them to expand on his responsibilities playing Mason the monkey—because they have kind of accomplished the impossible with Madagascar 3: Europe’s Most Wanted. I was surprised at how much better Escape 2 Africa was in comparison to the original Madagascar, but never expected my level of enjoyment to rise even more with the third. Darnell—also a co-writer with Noah Baumbach—and McGrath have grown alongside these characters and definitely found their voices. Where I could have cared less what happened to Alex (Ben Stiller), Marty (Chris Rock), Melman (David Schwimmer), and Gloria (Jada Pinkett Smith) in 2005, I’m a little sad to realize this could be the end of their adventures. Still not Pixar caliber in quality of story, emotional attachment, or cinematic expertise, the series has taken great strides to expand beyond a steady stream of jokes. Always very funny, these rather crudely angular animals have seen their animation become polished and their chaotic environments more lush. Being deserted on a tropical island gave trees and water; Africa had sand. What makes Europe such an ambitious locale is the hustle and bustle involved within a city. New York was only seen from the constraints of the Central Park Zoo while Monte Carlo, France, Rome, and London are portrayed in the streets, on trains, and in casinos. It’s an assault on the senses overpowering even more when the ‘Afro Circus’ comes to town. The black light turns on, the neon glow of hoops and spiral ramps radiates through the darkness, Katy Perry‘s “Firework” begins to play, and we’ve graduated to full-fledged spectacle.

Again beginning where the previous installment left off, Skipper, Kowalski, Rico, and Private take off in their monkey-powered plane with gold, diamonds, and the declaration they’ll never be coming back. Knowing those tuxedo-wearing birds pretty well after two movies, Alex wasn’t going to take the chance they were joking. So, apparently finished with Africa, this lion, zebra, giraffe, and hippo unearth goggles and snorkles to use for a leisurely swim to Monaco. With suspension of disbelief firmly held in cheek, we watch the quartet, Julien (Sacha Baron Cohen), Maurice (Cedric the Entertainer), and Mort (Andy Richter) hatch an Ocean’s 11-type heist to kidnap the newly created ‘King of Versailles’—Mason and Phil in a powdered wig—at the roulette wheel. An almost foregone conclusion of abject failure at staying invisible from the humans later and they’re on the lam.

The nefarious French animal control Captain DuBois (Frances McDormand) chases them like a Basset Hound to mount Alex’s head on her wall while the gang stows away on a train owned by the Circo Zargoza. Using the rest of the penguins’ funds, Mason and Phil buy the circus and a new plan is drawn up to play Europe and catch the eye of a talent scout from America. Vitaly the tiger (Bryan Cranston), Gia the jaguar (Jessica Chastain), and Stefano the sea lion (Martin Short) will get their wish of performing across the Atlantic and our transplants will finally return home. A win-win for all involved, it’s the Cars-like backstory of this once proud traveling band of gymnasts and the discovery Alex and his friends have never seen a trapeze before that threatens to derail everyone’s aspirations. Add DuBois’ keen sense of smell and a tranquilizer dart could send their house of cards crumbling down. The big plus from all this is how we actually receive a villain this time around. It’s fun to look back and realize the first film had none—our heroes were their own enemy since I don’t count the foosa as anything but a plot device—and the second simply wasted Alec Baldwin‘s unmistakable laugh. McDormand appears to be having a good time and her T-1000-esque indestructibility is a blast as the filmmakers fearlessly use the power of the animation medium for more than letting animals talk. Still a background element cropping up sporadically to keep us from forgetting her pursuit, there’s also some conflict between the circus and zoo folk. Cranston’s Vitaly has some anger issues, but it’s Stefano’s manic desire to please and Marty’s crazed need to get involved by painting himself in polka dots to diffuse the tension that I liked most.

Light-hearted throughout despite the foe on their tail, everything builds to the debut of their ‘Fur Power’ circus—proving animals can Cirque du Soleil just as well as humans in a visually disorienting 3D assault I loved. The absurdity of olive oil slicked beasts jumping through hoops, a brilliant band of cockney dogs juxtaposing gruff manliness with frilly clothes, and the love affair between Cohen’s Julien and an unintelligible Ducati-riding bear only increase the enjoyment level and exemplify how this franchise kept its broad comedic appeal and found a way to flesh a decent plot around it. Never in my wildest dreams would I have thought I’d become a champion of the Madagascar crew, but they’ve slowly and steadily worn me down. And although the addition of new characters means a limited role for some favorites, none overstep their welcome nor make us wish for more.

If there was one thing I loved most about Europe’s Most Wanted, though, it’s that Nana must still be lost in the desert. Good on you Darnell and McGrath for acknowledging that joke had run its course. The penguins, however … I still can’t get enough.

Madagascar 3: Europe’s Most Wanted is now in wide release.