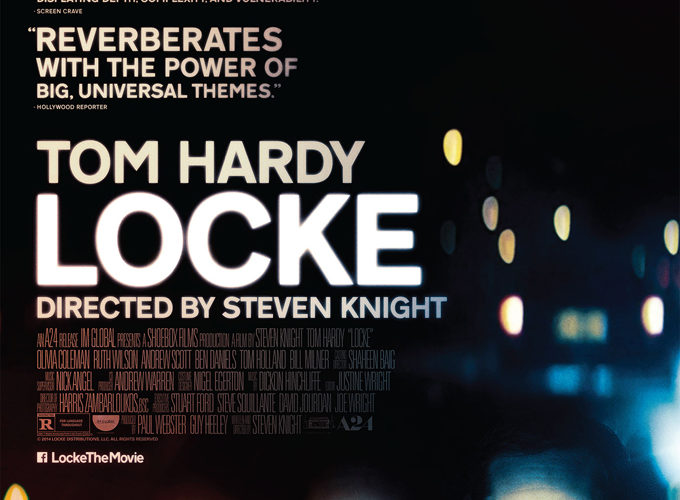 In Steven Knight’s Locke the whole wide world is reduced to the nighttime interiors of Tom Hardy’s car. For most films, this kind of gimmicky paring-down would signal a limited, specialized experience, an artificial hurdle the drama could never overcome. I’ve seen Colin Farrell trapped in a phone booth, Stephen Dorff locked in a trunk and Ryan Reynolds buried under the dirt in a coffin, but Locke ends up being more riveting and suspenseful than all of them.

The rather curious thing about Locke is that it really isn’t a thriller—not in the conventional sense—but a moral drama about one man coming to terms with just how much responsibility and control he has over his own life. Knight’s picture falls somewhere between experiment and triumph, but it ends up being as engrossing as it is because of the terrific work of Hardy as Ivan Locke. A Birmingham construction supervisor who is valued as a dependable pillar of the business, Ivan Locke drives off from the worksite on the night before a career-defining job, leaving the work and his family—waiting at home—behind. He’s heading to London to be with Bethan (Olivia Colman), a one-night stand who is hours away from giving birth to his child. This decision has not been arrived at lightly, but we have no way of knowing initially. All we see is what, at first glance, appears to be a man fleeing the life he’s carefully built. Knight’s script proves to be clever and canny in this regard, unspooling this one night and the contents of Locke’s internal character and struggle via a series of phone calls with the people in his life that he’s come to be responsible for.

There’s a painful confrontation with Katrina (Ruth Wilson), Locke’s wife, who is waiting at home with the kids, expecting another evening of family time with a man who’s always been there. Most amusing and disarming is Locke’s dumbfounded coworker, Donal (Andrew Scott), who’s going to have to find a way to make sure the morning’s concrete pour goes off without a hitch. In the backseat, sits a phantom that hangs imposingly over every uttered word and broken promise; Locke’s father, with whom he engages in searing debate over the nature of man as a provider and protector. The physical destination of the BMW’s long lonely journey is not up for debate—Locke is going to the hospital to see his kid—but the ultimate outcome of this man’s internal quest is absolutely up in the air. The final scenes may seem too indistinct to some, but they offer up a trajectory that puts a subtle, understated cap on the whole film.

Knight has written some pretty searing exposes on human nature within various social systems—Eastern Promises and Dirty Pretty Things come to mind—but Locke is compelling precisely because of how internalized and character-driven it is. Hardy has demonstrated a fine range and a real, stabilizing presence onscreen before, but he’s been woven in with real craft and artistry into the whole fabric of Locke and the performance dances hand-in-hand with Knight’s direction, which culls from stage play atmosphere while also being decidedly cinematic and psychologically expansive.

Take those phone calls and the quickly expressed details of the night drive and the world hovering outside the car for instance. These elements create an entire landscape that can be glimpsed mostly through the mirror of Locke’s words and the portrait that those disembodied voices on the other side of the line provide. The physical interior of the car and the rushing, living material universe outside it help ground the movie in a struggle and pull of two realities. One of these worlds exists primarily within Locke’s own being, and the other is the one he’s in real danger of crashing into—more so than any of the zipping vehicles he’s flying past on those nocturnal highways. Knight seals us in one space, but there’s no trick or movie engine that’s holding us here; no snipers to pick off Hardy, no zombies waiting outside the radio station door, and no ticking clock before death tolls. The choices of Ivan Locke are the real antagonists of the piece, and it’s always fascinating to watch him try to navigate them, looking for a happy solution for everyone and coming up empty.

The performance of Hardy is impeccable, and I dare say he may make this assignment look easier than it is, forming a realistic and tangible portrait of a man who thinks he can handle each situation in his life with the same basic work ethic, the nuances be damned. This means sometimes he’s quiet, composed and restrained, and other times the little boy who’s been hiding in there since his youth threatens to come out and be heard. So much of the film depends on us not just seeing the Ivan Locke in the car, but the Ivan Locke that’s known to each of the people on the phone, one that can’t be captured only in the conversations, but in Hardy’s emotions and reactions to them as well. He carries the picture so well, that many times the obvious slightness of Locke is overlooked and we’re scarcely aware of anything else.

Locke may not appeal to all sensibilities, and it isn’t a complete knockout of a film—there are times when the experimental angle has clearly trumped some of the narrative’s natural energy—but it is an ambitious exercise that overcomes the technical triumphs of its style. I tend to merely admire movies like this, but I was moved by Locke and by Hardy’s portrayal of the titular character. We’ve taken many long, winding car rides in the movies, but this is one you won’t think of exiting until the wheels have finally come to a stop. In a season of movies chockfull of physical event, here’s a dynamic, tension-filled vision of a dude sitting behind a wheel, trying to interpret his own internal GPS.

Locke is currently in limited release and expanding.