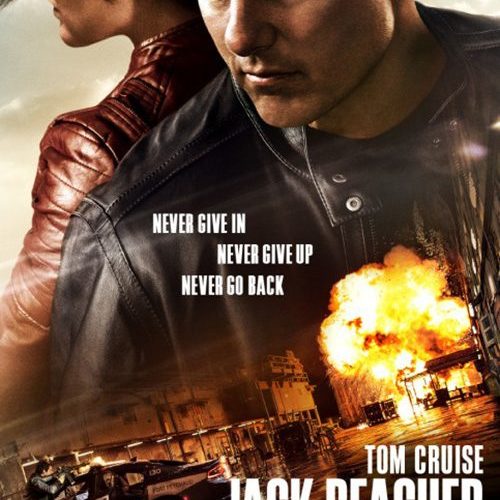 Generally, it takes a few installments before a film series sees fit to burden its lone wolf hero with extraneous partners, but Jack Reacher has done so on the mere second go-around. Framed for murder (again), Jack Reacher (Tom Cruise) is on the run with his similarly framed (for espionage) onetime Military Police comrade Susan Turner (Cobie Smulders), and 15-year-old Samantha (Danika Yarosh), who may or may not be his daughter and thus is at risk of the bad guys using her to get at him. As in the first film, Reacher storms about glaring at people, telling them how badly he’s going to fuck them up, and then fucking them up, solving a mystery in the gaps between doing so. But it’s a lot less fun this time around. Samantha is a major factor in this. She’s like a Simpsons parody of an irritating teen sidekick character, but played horribly straight. Though she gets to be useful to the plot on occasion, she just as often propels it through head-smackingly idiotic decisions. In one scene, she goes from scared stiff at her villainous pursuers to snarking at Reacher, apparently instantly forgetting that her foster parents have just been murdered. There is no quicker way to undermine an alleged badass than to have them fail to corral a moody teen. One can see the point – forming an on-the-run makeshift family with Turner and Samantha forces Reacher to confront the loneliness of his drifter knight errant lifestyle. But that idea doesn’t really come to much. If there’s a Jack 3cher, I doubt Samantha will get even a mention.

Turner is a much better character, and Smulders plays her with cool, no-nonsense ultra-competence. But it can be tricky to feature two ultra-competent heroic characters when only one of them has their name in the title. Turner is frequently sidelined, whether through flimsy narrative excuses or the film sort of editing her away and hoping the audience forgets she’s there (in the climax, she’s perfectly positioned to shoot the bad guy as he’s about to kill Reacher and… uh… doesn’t). She even argues with Reacher over his stubbornness in investigating things alone, as if Smulders herself is insisting that the movie use her better. It doesn’t.

This is particularly odd given that Turner has far more of a personal stake in the plot than Reacher, given that the evil military contractor acting as the movie’s villain initially kills some of her men and frames her, with Reacher only getting caught up in things later. To say nothing of how Samantha’s presence is entirely separate from anything to do with the conspiracy at hand, meaning that Reacher’s whole emotional arc has nothing to do with what’s actually going on. But then, without so much of the aggravating sentimentality her scenes bring, there wouldn’t be much meat left on the film’s bones, since the mystery is disappointingly simple.

The first Jack Reacher was a beach read adaptation made enjoyable enough by its clean and sometimes vicious style, willingness to go on curious tangents, and occasional offbeat humor. Jack Reacher: Never Go Back is harmlessly generic. Its bum-bum-bum-bum score, “sure, put the camera there” visual style, and make-it-fast-to-make-it-look-frantic editing make it thoroughly suited to be playing a year from on FX, which is almost surely playing the first film as you read this. This movie is plain-flavored ice cream (not vanilla, mind you – plain).