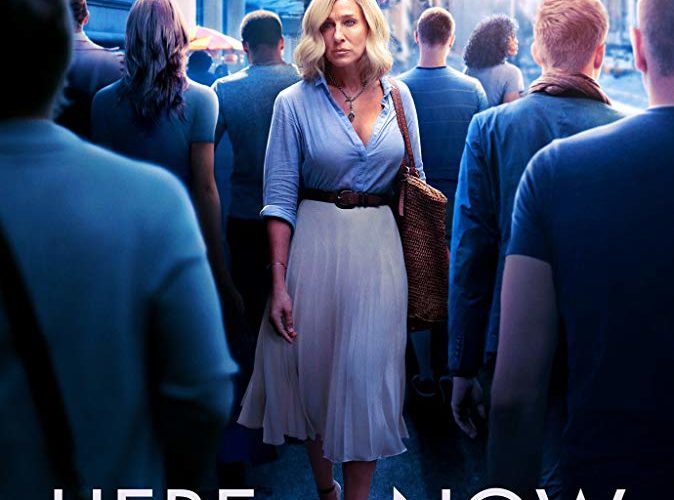 Review: ‘Here and Now’ Pays Homage to Agnès Varda with a Manufactured Touch

The news ain’t good. Famed vocalist Vivienne Carala (Sarah Jessica Parker) is on the cusp of a world tour for her latest (and ninth) album only to find herself in a hospital waiting room calling her manager (Common’s Ben) to say she’s going to be late for rehearsal. She is to celebrate her twenty-fifth anniversary of playing at Birdland with multiple concerts beginning the very next day, an auspicious occasion even her well-known French mother Jeanne (Jacqueline Bisset) has decided to attend. And yet where jubilation and excitement should reside, only despair and dread are present. Best-case scenario is fourteen months of life with or without the ability to ever sing again. Worst-case scenario is death much sooner than she’ll need to correct her charmed life’s many wrongs.

Written by Laura Eason and directed by documentarian Fabien Constant (as his fictional narrative debut), Here and Now depicts a fateful twenty-four hours spent traveling New York City in search of answers to the loftiest of unanswerable existential questions. The original title was Blue Night, a more apt if on-the-nose descriptor signifying her musical genre of choice and current mood. Vivienne hopes working will distract her, but it doesn’t. She then tries shopping only to let her health distract from the fact she spent a ton of money on a dress that she left on the floor of a Lyft ride’s car. Art, fame, celebrity, money — they’re all suddenly rendered meaningless when compared to love, family, and hope. But how could speaking this truth aloud today not feel disingenuous? The journey is therefore internal and starkly different than Agnès Varda’s seminal Cleo from 5 to 7 for which Constant’s film is considered homage. Where that placed its titular singer in close proximity with those she willingly tells her tragic news only for them to dismiss it as embellishment or deflect it with comedy, Vivienne is on an island alone with the severest of melodrama. Rather than cope with the future or lack thereof, Vivienne buries her head in regrets. She tries to keep up a brave face, but everyone close to her sees through it despite knowing not to pry deeper — except boy-toy drummer Jordan (Taylor Kinney) and his perpetual horniness. She does this less for them than herself because confronting it has proven impossible to bear.

Maybe she can tell her ex-husband (Simon Baker’s Nick) before their daughter (Gus Birney’s Lucie) arrives home. Maybe she can let her manager in on the secret since he’ll need to know as far as deciding whether to call off the tour. At one point we wonder if it’s her ever-present Lyft driver Sami (Waleed Zuaiter) who will become the lucky stranger to have all Vivienne’s problems dumped onto his lap. This is a woman desperate to escape the plans she personally fashioned to facilitate a joyous summer of adventure because what was great for a healthy artist freely traveling the world without fear proves the complete opposite for an ill and isolated soul who has allowed distance to form between her and everyone she’s ever cared about. There’s an intriguing story here if Eason and Constant were interested in mining deep enough to tell it. The sad truth is, however, that they weren’t. Whereas Varda’s cinematic classic has stood the test of time as a brilliant piece of feminist art and an existential delight with the perfect mix of debilitating drama and hopefulness, Here and Now languishes in the past without acknowledging its lead’s forthcoming struggle. It wants us to sympathize with her plight and yet all I conjured was pity. I pitied Vivienne for never realizing how much of her teenage daughter’s life she missed until too late. I pitied her for being selfish in the absolute wrong way upon finding herself in a predicament that demands her to be the center of attention.

That’s not to say there aren’t some very good moments. I loved Vivienne’s impromptu run-in with an old friend celebrating her birthday (Renée Zellweger’s Tessa) to see through the looking glass at what could have been if her marriage had worked (but the underlying potential for it to be wrapped up in a patriarchal message that everything would have been better if she didn’t pursue her dream and instead stayed at home is very problematic). I loved her interactions with Lucie most and Nick a close second because you can see a connection between the three that recognizes both the good and bad of what Vivienne’s career has bore. These characters aren’t products of her fame and thus feel more authentic and important by comparison. The stuff with Common and Kinney conversely felt manufactured as a release for Vivienne to break from the thought of telling those who mattered more than them. And despite her mother being someone from her past too, the interactions with Bisset never quite come off that way. I think some of this is intentional, though, since Jeanne is apparently famous and self-absorbed too, but the friction between them is too great to forget when a scene that (maybe) portrays reconciliation arrives. While I can forgive these instances because you need some variety — and separating personal and professional identities serves that purpose — I find it difficult to take what goes on with Sami. Here’s a secondary role asked to do a lot of heavy lifting it simply cannot support.

He’s initially drawn as a jerk, enough that Lyft should be angry for having their logo so prominently highlighted under an employee treating his customers as though they should be privileged he opened the door rather than appreciation for their choice to get in. Sami is enduring his own drama with heated phone conversations and blaring heavy metal in opposition to Vivienne’s request for silence, but we don’t care about him enough to let his hardships equal her central plight. I honestly don’t know what his purpose to the tale is besides as an uninterested third party and yet the film believes he’s so much more. The film believes itself to be more than the quiet, contemplative emotional study it might have been. It unfortunately can’t sustain that goal.

Here and Now opens in limited release on Friday, November 9.