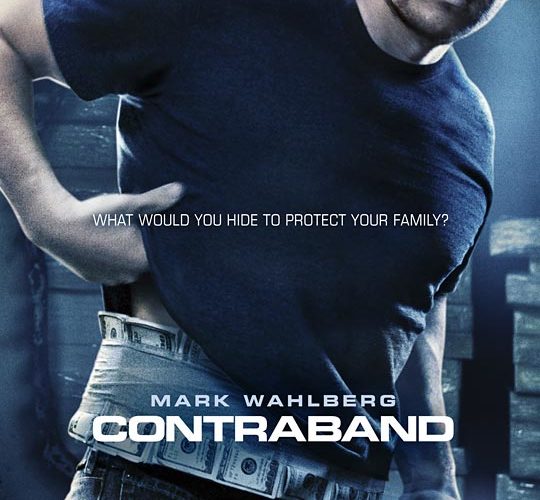 Judging by the advertisements for Contraband, I expected to watch a half-baked actioner with big beats and little brains (let alone heart). Instead the film, a remake of the Icelandic Reykjavik-Rotterdam and with a cast member as director, is a more than capable action picture, filled with fun small moments and a tight script that whisks us from the unmistakable charm of New Olreans onto the high-seas and into the high stakes world of illegal contraband.

Chris Farraday (a fully-engaged Mark Wahlberg) was one of the best runners of contraband in the delta, a fact reiterated more than a few times in the opening scene at a former crew member (Lukas Hass)’s wedding. But now he’s just a regular Joe, living with his wife Kate (Kate Beckinsale) and his two kids, setting up security systems to keep people like himself out of homes. While Chris is out of the game, his brother-in-law, Andy (Caleb Landry Jones) jumps in, and quickly finds himself out of his depth when a drug run goes bad. This leaves Tim Briggs (Giovanni Ribisi, as squirmy and sleezy as ever) none to happy. He demands payback either in product, cash, or in the lives of Andy and Chris’ family. In a flash, Chris Farraday is once again mounting up to head off shore and complete One Last Job. He enlists the help of Sebastian (Ben Foster), a friend who has taken the mantle of a brother who is leaving the game himself. He attends AA meetings, is building up a construction company, and his loft is about halfway from completion, much like the owner himself. Sebastian sets up a deal, gathers a team, and sends Chris and Andy off to repay their debt.

Once aboard the ship, we see Chris step into high gear, manipulating his nemesis, the aptly-named Captain Camp (J.K Simmons, a living, breathing Foghorn Leghorn that somehow works beautifully) and using his smarts to turn the large cargo vessel into his own personal hiding place. As his family is harrassed back on the mainland, Chris has to jump through the requisite number of hoops to evade the captain, customs, and return home to bring his family to safety.

This all might sound rote, but I’d suggest using the word “solid” instead. Yes, the script from first timer Aaron Guzikowski goes through all the usual machinations of a heist film, but it does so because you know what’s going to happen. The script does a fantastic job of putting all of its main characters into tight corners, forcing them to make good, quick decisions in dire straits. The only real sore thumb is a large, overwrought action piece in Panama that feels more like an executive note than a necessary part of the script, although the sequence does lend itself to a nice resolution by the film’s end. Building on that solid structure, things take an interesting turn about halfway through, creating a tangled web of familial interests and desperation, cultivating a surprisingly deep emotional current through all the action. It’s much closer to the drama in The Town than you would expect at first breath. It seems that in this seedy world, everyone has a master to serve. By the time the heist reaches it’s inevitable (and well-crafted) sink-or-swim conclusion, everything comes together leading first with the pathos, and then with the goods.

Director Baltasar Kormákur builds off this structure by letting his talented cast have fun, a choice that pays dividends with a cast this talented. There’s a loose feel to the movie, no doubt aided by it’s New Orleans locations and blues soundtrack, which gives the movie a playful, upbeat vibe amidst some fairly dark elements. Everyone’s allowed to hit extremes (Ribisi in particular is a joy to behold) while still throwing in little moments to make the characters jump further off the page. It’s one thing when the creep gets a deserved ass beating; it’s quite another when it’s taken out in front of his sad-eyed seven-year-old. Beckinsale does well with a thankless role (“be pretty…now be sad…now scared!”) and Haas shows how a normal person in a gun fight would react. It’s a situation where the weakest link is difficult to find, allowing the audience to  enjoy rooting for the heroes and jeering the bad guys.

I’d also be remiss if I didn’t point out the visuals. The production design by Tony Fanning and the set decoration from Cynthia La Jeunesse really go a long way in putting us in this world, from the run down New Orleans holes in the wall (using Schlitz as a sponsor is a touch of genius) to the nooks and cranies in the giant cargo boat, setting up a floating labrynthe. While the film is shot well, allowing us to follow the action without confusion, DP Barry Ackroyd (he of The Hurt Locker and Green Zone) seems to ape his handheld-zoom style rather than improve his work on previous films. Far too often you notice the routine: start wide, zoom in on a line, zoom in farther on a line, next set-up. It gives the film a bit too much visual predictability that distracts rather than enhances what is an otherwise fine flick.

Contraband is now in wide release.