Rotterdam Review: In the Tiger Award-Winning Pebbles, Nature Does the Talking 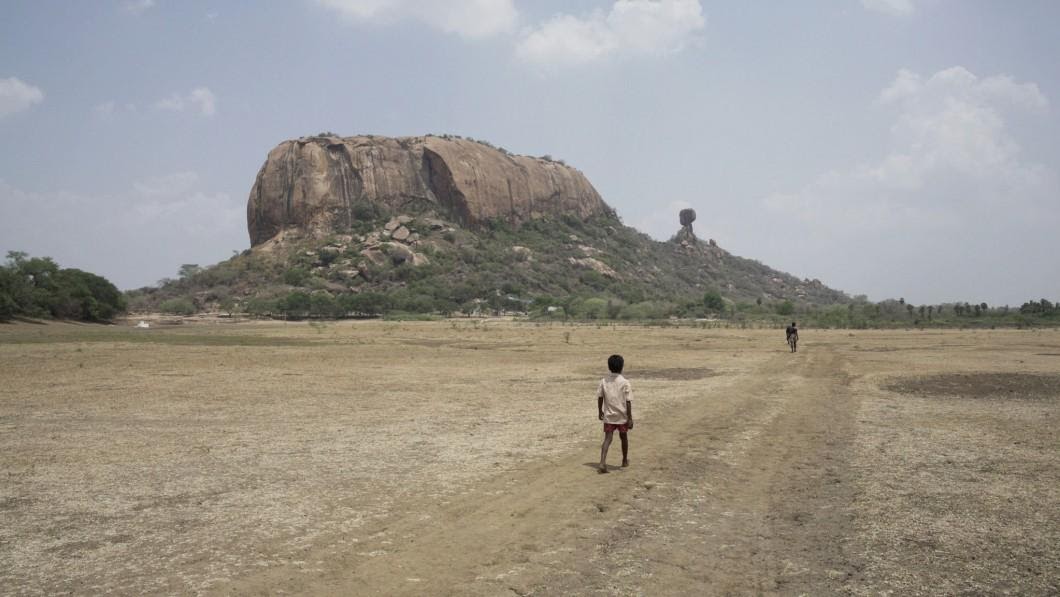 The striking Pebbles is set in Arittapatti, a village in southern India terrorized by draught so persistent it has turned fields of green into yellowish dust and forced grandparents and grandchildren alike to spend their days trying to catch the mice that escape from their burning holes in the ground. Father Ganapathy should be out there with them but prefers to day-drink and chain-smoke instead. Perhaps he has been like this ever since his wife left him. Or maybe he’s always been that way, and that’s why she left him.

Director Vinothraj P.S. doesn’t tell us. Instead, he merely shows what’s happening. And that doesn’t just include important plot points like Ganapathy confronting his wife in her home village, or his disappointed son tearing up their bus fare. It also includes the 13-kilometer walk the two have to take to get back home as a result of said tearing. Settlements are few and far in between in this corner of the world, which means people spent as much time getting to and from places as they do… well, being anywhere.

Nor does the director shy away from filming the beatings Ganapathy gives his son. Domestic violence plays such an important role in the lives of these characters that he does not know how to interact with his children other than through a flick on the wrist or a lash of the tongue. From the moment we meet him, the look on his face is one of pure, unwavering disdain. His permanently knitted brows stand in stark contrast to his son’s white-eyed stare of quiet, good-natured contemplation.

While each actor plays their part convincingly, Ganapathy (portrayed by Karuththadaiyaan) steals the show in captivating ways. Maybe it’s the way he walks, arms and hips swiftly swaying back and forth in an attempt to project power even when none are watching. Maybe it’s the way he cups his palm around the end of a cigarette, which I assume is to prevent the wind from blowing out the tip. Whatever it is, his character––and, by extension, the film he helped carry––is an unforgettable one.

Of course, that impression couldn’t have been made without great cinematography from Jeya Parthiban and Vignesh Kumula. The camera isn’t omniscient; it exists in and moves through spaces much like a person does. It can’t magically teleport from one location to another but must travel there alongside the characters, conveying the vastness of this environment better than any high-flying drone shots ever could. Considering the technical quality on display, it feels miraculous that Pebbles marks the directorial debut for Vinothraj P.S., who started his career by working in a Chennai DVD store. Whether the audience finds itself in the midst of a lively agrarian community or at the back of a jam-packed bus, every sequence feels as though it is part of a living, breathing ecosystem.