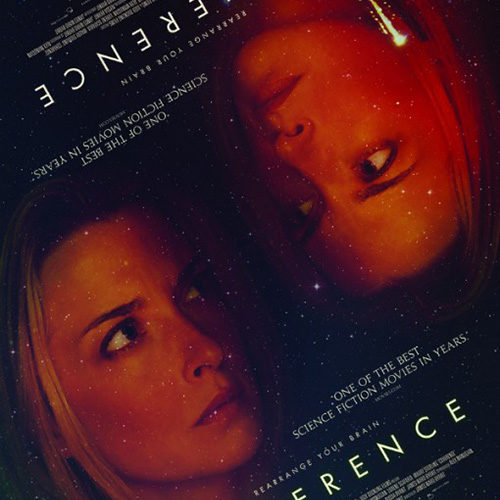 If you’ve ever dabbled in theoretical physics–or watched The Big Bang Theory–you’ve probably heard of Schrödinger’s Cat. The cat that’s simultaneously dead and alive while unseen within a closed box also housing a vial of poison? Two realities co-existing with the only certainty being that both are possible until one snaps into place as truth when the flaps are unfolded to reveal an opaque interior newly transparent? Its wild paradox can either baffle you or help in comprehending quantum physics depending how deep down the rabbit hole you’re willing to go; expanding the number of outcomes infinitely only makes it wilder. What if the box is a house, the cat a dinner party with both good and bad people? Predictable and unpredictable people? Sane and insane? Hungry and full? This is writer/director James Ward Byrkit‘s Coherence.

If the cat can be dead or alive depending on whether the poison was released, couldn’t it also break a leg? Maybe it went deaf, blind, miraculously got pregnant, was pregnant and had its babies. Maybe the cat disappears. As long as that box is closed you literally have no clue what’s going on inside save what your mind can predict. What if you free your mind to think outside the realm of how you understand reality? There’s no way to even hypothesize an educated guess anymore. In comes the film’s title: coherence defined through physics as an ideal property of waves enabling stationary interference. All those unknown boxes (universes/dimensions) lined up as single waves temporally coherent to one another through time until they intersect to become spatially coherent in space.

I’ll be honest, that last paragraph is simply my brain paraphrasing—rightly or wrongly—a complicated theorem in order to attempt solving Byrkit’s puzzle and you should stop reading right now if it’s piqued your interest, because entering this film blind is the only way you’ll truly appreciate his feat. He’s given the cat the ability to escape its paradox and enter those paradoxes of countless other cats once trapped and now free to enter each other’s. Using the appearance of Miller’s Comet in the sky, Byrkit has rendered an astronomical anomaly allowing these myriad waves of possibilities to interact. And by providing us eight “cats” in a box, he manufactures that many more possible combinations. Every time one exits the world he/she knows, the odds are spun until returning to that exact world becomes virtually impossible.

You could say, “Why leave?” The answer is simple: they’re human. Humans are curious by default and we all know what curiosity does to “cats.” A desire for answers always presents itself when the unknown stares us in the face. It’s one thing to hear chatter about a comet’s potential to wreak havoc—joking through our fear and paranoia—but what about when those postulations come true? Not only does cell service and internet disappear for Mike (Nicholas Brendon), Lee (Lorene Scafaria) and their guests, the lights extinguish on the entire neighborhood save one home two blocks over. A quest for explanation rears its head, separating the curious from the afraid, rational from paranoid. Survival instincts kick in and the trouble exacerbates as each character’s worst selves surface to ensure self-preservation above sound reasoning. Where each travels on their personal journey is planned through the motivations and psychology provided by Byrkit to his eight improvisational players. His goal was to produce a film with minimal crew and no screenplay, handing out character descriptions, plot points, and little else. Coherence takes place in one home and yet a new set is formed every time his actors leave—not by props or location, but by the diverging memories and converging actions of the inhabitants. Whether alcoholic Mike, quiet hostess Lee, Em (Emily Baldoni) the observer, her boyfriend Kevin (Maury Sterling), his ex Laurie (Lauren Maher), her new beau and everyone else’s old friend Amir (Alex Manugian), pragmatic Hugh (Hugo Armstrong), or his hippie wife Beth (Elizabeth Gracen), face value is a commodity none can afford because the box is forever in flux.

Keep your ears open and your eyes peeled because Coherence is all about the details. From colored glow sticks to conversation asides to mood, the tiniest fluctuation gives clarity on what belongs and what doesn’t at every moment in time. Who remembers what was done before? Who remembers it but has the specifics wrong? Any instance a choice is posited another infinite wheel spin of possibilities is added to the equation for creepier, scarier, more thought provoking, and down right horrific events to occur. The film is caught in a loop for what its characters believe to be the duration of the comet’s passing—any attempt to escape convolutes things further. Any effort to prevent chaos ensures chaos until the question “What’s going on now?” becomes “What happens when the box is opened if its inhabitants no longer belong?” As Byrkit has said in interviews, the science-fiction aspect was developed as a way to make his tiny room of characters expand beyond its physical constraints. While his adaptation of Schrödinger’s paradox may be its most fascinating piece and ultimately the impetus for the relationship drama subsequently occurring, it wasn’t necessarily his goal to mystify or confuse. Perhaps this is why it’s handled so beautifully—it’s mere window dressing for the meat and potatoes experiment of placing people in a situation out of their control. The coherence issue of intersecting waves somehow becomes the logical construct with which the irrational actions of the scared people within it react against. The change of venue each time the front door opens is constant while the behavior of whomever walking through it proves to be the unpredictable variable.

This is why our octet is comprised of such distinct stereotypes (a truth forcing some performances to unavoidably lack polish due to the combination of improv and clichéd psychology), to show how we all possess a dark side no matter what façade we’ve cultivated through years of social posturing. We all know the horrors we’re capable of performing through nightmare, past experience, and those seemingly benign thoughts popping into our heads at inopportune moments that would make even family back away if uttered aloud. If caught in a game of Russian roulette with yourself, cognizant that the shocking thoughts you’ve conjured are also manifesting in versions of you hidden from sight, a race against time for salvation commences. It’s a dog-eat-dog world—what would you do with an intimate knowledge of the person standing in your way?