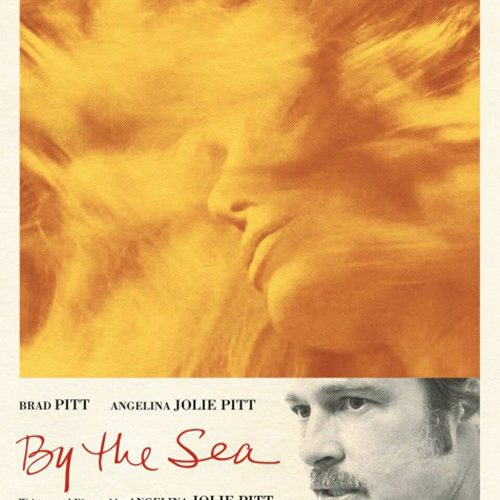 [Review] By the Sea

By the Sea begins with Angelina Jolie Pitt and her real-life husband Brad Pitt driving a sports car to a resort in France. The sumptuous buildings, the aerial camera shots, and the exquisite lighting create the impression of elegance and expense. Given this and the film’s paratext – arguably the most famous couple in America (except possibly Kimye) starring together in a film Jolie Pitt wrote and directed, with few other players and a quiet, contemplative trailer – one might assume they’re playing fictionalized versions of themselves. Might this even be one of those films where the main characters are nameless, “He” and “She” or “A” and “B”?

As it turns out, it is not. Among the first lines of the film see Pitt introducing himself as Roland and Jolie Pitt as Vanessa. The couple is staying at the resort while Roland writes, perhaps about one of the locals and bartenders, but Vanessa is displeased with Roland’s alcoholism, which leads him to do precious little writing. Vanessa, for her part, is shaken up by some unmentioned tragedy, hinted at largely by images spliced into particular scenes for a small handful of frames, and the couple might not make it.

It would be unfair to say that Pitt and Jolie Pitt do not give good performances; however, they play a wealthy couple and they both dress impeccably. They are not heavily made up or otherwise disguised, and the vast majority of the film sees them on screen together looking beautiful (though not necessarily getting along). Despite the call for us to do so in the film’s opening moments, it is impossible to discard or ignore their star images. At the same time, the film does nothing to play it up or otherwise utilize it. To make matters worse, the dialogue is a bit stilted at times – perhaps intentionally, perhaps not; it’s difficult to tell – which inadvertently redirects attention back to the performers. We are supposed to think of Pitt and Jolie Pitt as two people who are not them despite the movie doing little to convince us of it.

Jolie Pitt’s other shortcoming are in a few details of pacing and plotting. The middle of the film drags and repeats a little bit, and its climax feels phoned in and organic, essential to her “point” (which, nonetheless, is nuanced and ambiguous, not didactic) but not rendered or given any internal reason to happen. A few narrative bumps are more than made up for, however, by Jolie Pitt’s tonal control.

There is no reason, really, that a film about a rich couple played by a rich couple should read as a parable, but it does. Jolie Pitt’s evocative use of landscape shots, her trust in silence to speak loudly, and a firm belief that less is more every step of the way reveal a director who, for all her associations with Hollywood, has almost certainly given due time to the “art cinema” from across the pond.

Accordingly, and as suggested earlier, Jolie Pitt makes clear what By the Sea is “about” but does not provide an “answer.” It is not about her marriage, as some hyperactive imaginations working from a trailer and a line from an interview hypothesized, but rather about Jolie Pitt’s personal life. In 2013, she underwent a double mastectomy to prevent breast cancer, which she had an 87% chance of developing; two years later, she had a preventative oophorectomy, which brought about menopause at the age of 39. Production on Sea concluded between those operations, but it is almost certain that she was aware of the risk of both breast cancer and ovarian cancer while writing By the Sea, and they reflect heavily in the film.

Roland drinks heavily and says cruel things to Vanessa, but we know he loves her despite his actions. Vanessa, for her part, is cold and terse, as unconcerned with trying to make things better as he is bad at it, and most importantly, disenchanted with herself. When she steps onto a balcony and see sunbathers, breasts exposed, beneath her, it is impossible not to remember Jolie Pitt’s own procedure. On the flip side, the only shots in the film with nudity are of her breasts, not her rear or lower body or even of Pitt, and they come in situations when Vanessa is made to be or feels sexy. She, as star and director, can use the camera in a very unique way here, to selectively call on nudity to convey sexiness and comfort in her own body.

The one thing that makes Roland and Vanessa get along is when they watch, through an eyehole low to the ground, the next door couple having sex, reminiscing of youth and beauty gone. As a menopausal 40-year-old pressured to remain gorgeous forever, age is a funny thing for Jolie Pitt, pulling her in both directions in accordance with our traditional and gendered understanding of it. By the Sea fights those prejudices.

That this all manifests through a relationship drama in which the couple behave in a manner stereotypical of their genders further complicates — but does not muddle — the message. He is the “rational” and calm worker, she the emotional and “manipulative” housewife, but Jolie Pitt merely begins with these archetypes. She refuses to take sides and is critical of both characters, and any thoughts about who is in the wrong arises more from a viewer’s preconceived bias and way of thinking than anything intrinsic to the film.

The conclusions Jolie reaches are admirable, though her roadmap is sometimes muddled. It would be a lie to say that By the Sea convinces at every turn or that every contradiction, inconsistency, and pause is artful and deliberate. It would be a bigger lie, though, to accuse her of didacticism, a lack of creativity or willingness to take a risk, or call her film a “vanity project.” By the Sea is not a great film, but it is made by a director who has a genuine desire, and even the talent, to make one.

By the Sea is now in limited release.