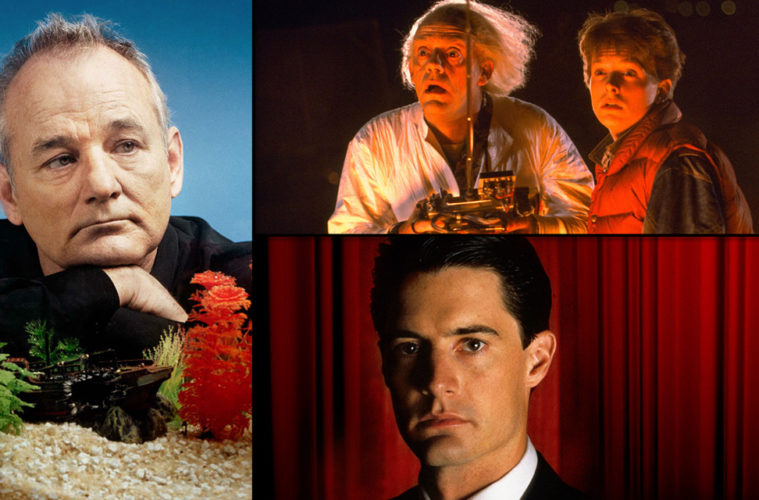 Recommended New Books on Filmmaking: Bill Murray, ‘Twin Peaks,’ ‘Back to the Future,’ and More

Summer is over. Okay, the calendar says otherwise, but it sure feels that way. But autumn means festival season and Oscar bait, and that’s good news for cinephiles. Here are some noteworthy, film-related reads for passing the time between jaunts to the cinema. Take it away, Bill.

How has there not been a “critical appreciation of the world’s finest actor” before now? Of course I refer to Bill Murray, whose life and career is documented in Robert Schnakenberg’s Big Bad Book of Bill Murray. From A (About Last Night, which, apparently, almost starred Murray and Nick Nolte until a “disastrous meeting” between the actors occurred) to Z (Zombieland, a memorable cameo that only came to be after Patrick Swayze, Jean-Claude Van Damme, and several others turned it down). Murray’s personal life is represented, his likes and dislikes are highlighted (he considers Mame the “worst musical ever made”), and, of course, his television and film work is all here. Author Schnakenberg never shies away from expressing his opion, wondering why Murray chose to make such films as The Man Who Knew Too Little. But he is first and foremost a fan, and understand what Murray-ites want from this Big Bad delight.

We Don’t Need Roads: The Making of the Back to the Future Trilogy by Caseen Gaines (Plume)

The more time passes, the more impressive Robert Zemeckis’ Back to the Future seems. The original film turns 30 this year, and to commemorate it and the two films that followed, author Caseen Gaines has constructed a thoroughly researched account of how the trilogy came together, and how it’s remembered. Perhaps unsurprisingly, the two most captivating sections involve casting might-have-beens. Fans have known about the firing of original Marty Eric Stoltz for years, but Gaines goes into great detail on why the switch to Michael J. Fox occurred, and how it came to pass. (As assistant cameraman Clyde E. Bryan puts it, “Eric didn’t get it.”) Then there’s the strange story of how actor Crispin Glover was replaced with Universal Studios theme park employee Jeffrey Weissman. (Cinematographer Dean Cundey, called Weissman “Crispin without the trouble.”) Bravo to Gaines for crafting a fun, informative exploration of the flux capacitatin’ time-travel classics.

As If! The Oral History of Clueless by Jen Chaney (Touchstone)

It is no exaggeration to call Amy Heckerling’s Clueless one of the most beloved films of the 1990s, but it’s easy to forget just how strong the 1995 Alicia Silverstone-starrer is. (I’d call it a better, bolder creation, than any films nominated for an Oscar in its place, including the winner, Mel Gibson’s Braveheart.) Jen Chaney’s As If! Is the exhaustive, wildly entertaining oral history Clueless deserves. The gang is all here, from Silverstone and Paul Rudd to Wallace Shawn and Donald Faison. There are casting tidbits (names tossed around for the lead role of Cher included Angelina Jolie, Gwyneth Paltrow, and Reese Witherspoon), on-set anecdotes (everyone adored the late Brittany Murphy), and surprising influences (The Conformist!). One would be hard-pressed to find a better companion to a great film.

Clint: The Life and Legend by Patrick McGilligan (OR Books)

Whatever one thought of American Sniper, it was a startling reminder of the significance and zeitgeist-tapping abilities of then 84-year old actor-director Clint Eastwood. His is a career less ordinary, careening from Rawhide to Leone to Dirty Harry and Unforgiven, and Patrick McGilligan’s Clint: The Life and Legend covers every step. The personal and political life of Eastwood is here, as well, right down to his infamous dialogue with an invisible” Barack Obama — well, a chair, really — at the 2012 Republican National Convention. “It is possible the memory [of Eastwood’s appearance] will never fade,” writes McGilligan, and while that may be true, far more time is spent on the man’s cinematic output. The book is a weighty, hugely informative effort, one befitting a subject of Eastwood’s continued importance.

Note: This book is also available on the publisher’s site.

With production on the new season of David Lynch and Mark Frost’s Twin Peaks about to kick off, the time is right to reanalyze one of the greatest, most influential TV dramas in history. Andy Burns’ Wrapped in Plastic does this with wit and insight, covering the show’s initial ratings success and later commercial failure while also featuring interviews with the likes of Sheryl Lee, Ray Wise, and James Marshall. Burns successfully finds new ground to cover, even describing a Peaks-parodying episode of early-90s Disney animated kids show Darkwing Duck. (It featured “the character of Launchpad conversing with a silent log, which tells him, ‘The cows are not what they seem.’”) He also helps set the record straight regarding the myth of Fire Walk with Me’s failure at Cannes. “I was there,” the film’s cowriter Robert Engels tells Burns. “Nobody booed. I feel bad for David, because it didn’t happen that way.”

While it may be difficult to screw up a Star Wars-themed coffee-table book, Ultimate Star Wars still deserves praise for its smart layout, colorful design, and admirable level of detail. The 300-page tome is broken down into four sections — “Characters and Creatures,” “Locations,” “Technology,” and “Vehicles” — and chock full of timelines, quotes, and as many bits of trivia as any SW text ever written. Your inner Jocasta Nu will swoon over info about Sy Snoodles’ love life and the types of rodents found on Yavin 4. (I don’t mean that to sound sarcastic, since such minutiae is nothing if not enjoyable.) While there are no Force Awakens entries, the animated Clone Wars series and Star Wars Rebels are represented. That makes for a truly comprehensive effort.

Keepers: The Greatest Films — and Personal Favorites — of a Moviegoing Lifetime by Richard Schickel (Knopf)

Richard Schickel was the film critic for Time magazine for nearly four decades, and as a pre-teen trying to get my hands on as many bits of criticism as possible before the internet made it all so easy, his was a major name. While Schickel’s writing now comes across as rather dull, he remains a figure of great interest. Keepers is, then, an adequate introduction to his work for newbies, or a reminder of his stature to those who grew up on his work. His opinions are often infuriating. Take his estimation of the Marx Brothers: “They managed some sublime bits, but … [t]he three of them do not add up to one great comedian, try as they might, and God knows they tried.” Here is Schickel on Mean Streets: “It seemed to me clumsy, awkward — somehow unpersuasive.” And the personal favorites he has chosen to cover here contain no surprises. (I longed for a left-field choice.) Yet Keepers is nevertheless a highly readable window to another era of film criticism.

In The Gag Man, Matthew Dessem charts the long and very unique history of Clyde Bruckman, early Hollywood comedy’s greatest bridesmaid. Dessem explores a writer and director who managed to work with almost all of the greats — Buster Keaton, Harold Lloyd, Laurel and Hardy, W.C. Fields — but has somehow been always left as a footnote to the masterpieces he helped create. Dessem’s rigorously researched book thoroughly traces the man who first read the book that would become The General, while exploring issues of authorship, copyright, and how narratives of Hollywood are written. Dessem centers in on very specific minutia to tell his story, while always putting the story in terms of Bruckman’s own psychology, painting a portrait that’s both exhilarating and, at times, quite tragic. It’s an essential bookshelf addition for any film buff interested in the history of silent and sound comedy. – Peter Labuza

Note: The book is available to purchase on the publisher’s site.