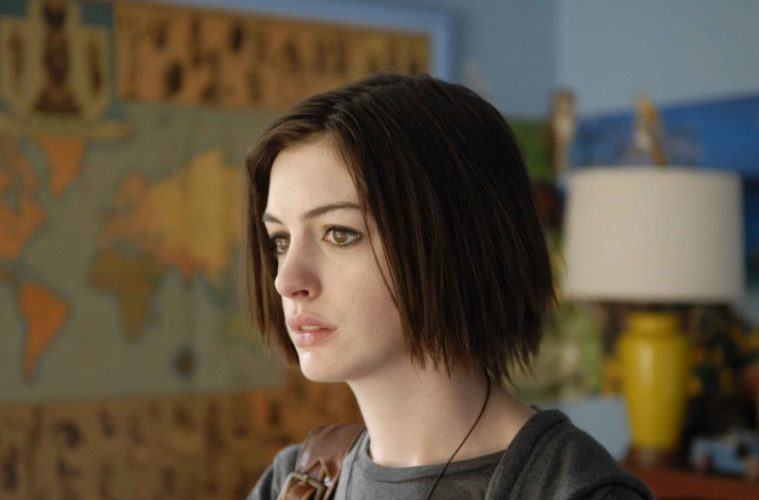 ‘Rachel Getting Married’ and the First-Person Humanism of Jonathan Demme

Kym (Anne Hathaway) carries herself with the foresight that she is damned. She takes a drag from her ever-present cigarette as she tries to compose herself before the arrival of her family, who are on their way to pick her up from rehab. Her clothes and body language, however, tell a different story. She wears a ratty emerald green coat at all times — a coat that appears a size too large as it hangs listlessly on her frail body. Kym has a perpetual downward glance that can only be achieved through shame and internalized self-hatred. Kym bears her scars for the world to see and, despite her best efforts, she cannot slip away from the glances of everyone around her who can obviously see that she is damaged in a fundamental way. She hasn’t seen much of her family over the past few years, but she’s clean now, going on nine months. Her sister (Rosemarie DeWitt) is getting married and with this family reunion comes the opening of scars for Kym and everyone else in attendance. Everyone knows Kym’s past and, like always with tragedy, it hangs in the air, clouding everything in its path and suffocating the fleeting happiness of any given moment at the mention of its name.

Kym carries that grief inside of her. She knows that her mere presence is enough to offset this otherwise joyous occasion and take her family back to the day her brother Ethan died. She doesn’t know if it’s possible to be forgiven or to even move on and she struggles with the knowledge that she is to blame. She was high when she crashed that car. She’s a pariah. When she walks into a room or tries to speak the air turns cold with the possibility that she will unearth the grief they have long since tried to bury. Kym cannot be untangled from Ethan, and she has to live with that sorrow. In Rachel Getting Married, director Jonathan Demme asks viewers to empathize with that feeling. Demme knows that we sin again and again for a lifetime and in some cases we don’t want to forgive, but knowing someone fails over and over again is not easier than being that person who cannot fix themselves despite their best efforts.

Demme occasionally worked in a mode that I like to call first-person humanism, when a director latches onto the perspective of one character and most of the film is fundamentally in reaction to the main character’s actions or state of mind. He also used this to great effect in The Silence of the Lambs through the main character Clarice Starling (Jodie Foster). In Rachel Getting Married, this technique is used to help viewers get under the skin of a character who is walking into a proverbial hornet’s nest of potential conflict and prolonged grief. This technique is achieved through the cinematography of Declan Quinn, whose choice to shoot the film like a “home movie” gives it an insular quality related to old VHS tapes and family secrets. We’re walking in Kym’s shoes, with the camera catching every sideways glance or snide statement from a family that loves her, but hasn’t quite forgiven her. It gives the film a paralyzing quality and furthermore only deepens Kym’s feelings of ostracization.

This is never more apparent than during the wedding rehearsal. Immediately, Kym is treated as something separate from her inner familial circle through the table arrangements and the distance with which they keep her from her sister and Sydney (Tunde Adebimpe), her husband-to-be. Everyone gives their toast and the night is going off without a hitch, but Kym is visibly uncomfortable at not being asked to speak and where they’ve placed her to sit. Hathaway plays this brilliantly with little gestures like staring down into the bottle of her glass of Seltzer or a downward glance and a long sigh at the close of another speech by someone who isn’t burdened with her trauma and shame. She gives the performance of her career when she finally does take the microphone to say something. She shakes a little, trying to unsheath herself from the anxiety of being surrounded by her family and she begins to talk about making amends. She describes herself as Shiva the Destroyer and goes into detail about who she apologized to while also trying to make light of the way she had to apologize in the first place. Her self-effacing comedy is brutally on the nose and Kym is the only person laughing. She’s bombing in front of these people, many of whom she is trying to make a first impression. Her sister grows weary of the speech and turns back to look at her husband and their heads touch gently, a beautiful moment among the Gena Rowlands-esque unraveling of her sister’s past. When Kym finally gets to the point of apologizing to her sister and congratulating her on the upcoming wedding, her speech has gone on too long and has made everyone more uncomfortable. It’s heartbreaking, because Kym was genuinely trying to apologize and turn the corner, but she picked the wrong time and place to give the speech. Her family is too nice to say anything to her right then and there, but the mood changed in the room and there are a few edits where their body language tells the story. Her mother (Debra Winger) grasps the bottom of her chin and her smile vanishes, while Kym’s father (Bill Irwin) looks on, concerned and saddened by the fact that his daughter has had to live through these experiences. Other nameless family members are confused and shake their head while smiling through gritted teeth.

The following day things seem to be entering into a state of normalcy. There’s still infighting between Kym and the family, but that is normal in and of itself. It’s charming in a way to see things settle, but that changes in a scenario involving a dishwasher inspired by a real-life event of screenwriter, Jenny Lumet. In a moment of dick swinging bravado, Sydney and his future father-in-law get into an argument about who can load the dishwasher the fastest and with the most amount of dishes. It is good, nice family fun and Kym can frequently be seen smiling among the competitiveness between the two men. When Bill begins to load the dishwasher he does so with efficiency and swagger, stopping multiple times to bask in the glory of how good he is at this meaningless household chore. He bellows “I need more dishes” and Kym complies grabbing a stack of clean plates out of the cupboard. Bill goes to put these dishes away, until he comes upon a plate of the Son he lost. The room freezes, and Bill tries to hold it together, but fails and has to leave the room. Kym is immediately crestfallen and stares blankly at the plate. Grief comes flooding back. The tragedy of their lost son cannot be excised from their lives. It’s a fact of nature that once darkness comes in, it stays. You can maintain it and minimize the damage, but it can overflow the body, mind, and soul at any moment. It’s like ripping off a scar and watching the blood seep out. Kym sits silently, blankly, a vessel that exists only to be tortured by the reminder that she did something she never meant to do and it cost her everything, and then Sydney touches her shoulder. He pulls her in a little close as if to say, “You’re okay.” He metaphorically picks her up when she’s been knocked down. It’s the nicest thing anyone has done for Kym in this movie. The beauty of Jonathan Demme is that he doesn’t merely languish in the desolation of Kym. He sees her as a flawed, damaged, at times unlikable or even bad person, but in Demme’s world, at the end of the day, she’s still treated as though she’s deserving of love despite her history.

When the day of the wedding arrives, Kym is a mess. She got into a verbal and physical altercation with her mother and attempted to hurt herself by crashing her car entire into a tree. She’s left battered and bruised and shows the damage upon her face as she’s sporting a black eye and a busted lip. She picks herself and tries to gather what little pride she has left and go home. The first thing she does is see her sister, who has been panicking about Kym’s whereabouts all night, and in a shot reverse shot their relationship is laid bare. Rachel hates Kym for all the lies she’s told and the things she’s done, but she still loves her sister at her core. Kym breaks and tears fall. Rachel brings her in for a hug before suggesting that she come inside her bedroom and get ready to be the maid of honor. What follows is a scene of pure intimate, physical beauty where Rachel gives Kym a bath. Close-ups are used to show touch as Rachel moves across her sister’s body culminating in a reveal that Kym has Ethan’s name tattooed on her shoulder. Rachel stops for a moment and then brushes her fingers across his name. All Kym ever wanted was to be forgiven; by herself or from God or anyone, even though she doesn’t feel deserving, and in some small way her sister does forgive her. For Kym things remain unbearably hard, but she has this moment of clarity where the dirt of her past is washed away in the cleansing love of the possibility of a future where she doesn’t have to carry a cross every waking hour of her life. Her sister can help carry the weight. Jonathan Demme’s greatest asset as a filmmaker is honing in on these moments and creating a cinema for everyone. A utopian cinema where we can laugh for love or find inner peace in our hearts. A place where you can wear grey among the lilac and not be damned for being broken.

Rachel Getting Married is playing at BAMCinematek on August 10 as part of their series Jonathan Demme: Heart of Gold.