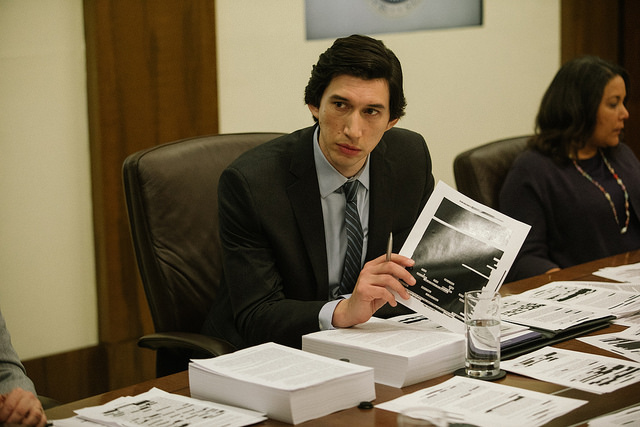 Sundance Review: ‘The Report’ is a Thrilling, Sharply Written Procedural

With it now being over a decade since the Bush-Cheney era, our perspective on the recent history is greater, which means it is time for filmmakers to have a stronger focus on mining the territory of post-9/11 political debacles. While Adam McKay’s Vice divided in its useful insight (or lack thereof), Scott Z. Burns takes a strictly procedural route in the thrilling, sharply written The Report. A student of the Steven Soderbergh school of filmmaking, it has the propulsive slickness of that director’s best films, without ever feeling derivative.

The always-fantastic Adam Driver continues his streak here in his best role since Paterson, playing Daniel Jones, on staff in the Senate working under California’s Dianne Feinstein (Annette Bening). He leads the investigation which, after spending six years and sifting through 6.3 million pages of documents, produces the Senate Select Committee on Intelligence Committee Report of the CIA’s Detention and Interrogation Program. The nearly 7,000-page report analyzes how this government agency grossly overstepped its bounds in torture, with around 500 heavily redacted pages being available for public viewing.

Structured in the vein of Spotlight and The Post, but certainly more engaging than the latter, the only home life we hear about is what those involved have given up to dedicate their life in this search for justice. This is a drama almost entirely made of up conversations in corridors, government offices, and the isolated basement facility that Jones and his small team made their discoveries. Within those limits, it’s a feat just how riveting Burns makes the proceedings, which have a clearly delineated timeline as if the writer-director put as much investigative care into the particulars as Jones did. The only time we’re lifted out of government dealings is the war zone-set torture sequences which are unflinchingly brutal to ultimately show the futility of these “enhanced interrogation techniques,” which replaced the more expertise-driven, effective method of rapport-building.

As Jones discovers, at least 119 detainees were held at these black sites, with a quarter of them wrongfully imprisoned. In one case, a man was waterboarded 183 times without giving up a single piece of information and another died of hypothermia. These gruesome practices, as led by Air Force psychologists with no actual interrogation experience, sold them as based on science and proven to work. When they didn’t–even after being paid $80 million by taxpayers–the trail of covering up what occurred led all the way to the highest powers of the government. What makes The Report so thoroughly gripping is not a reminder of these facts, but Burns’ singularly sharp focus throughout these two halves: first, the fact-finding of the acts committed during the Bush-Cheney era; then, the struggle to get the report published during the Obama administration, who fabricated that finding Osama bin Laden was a result of these methods.

Rather than leaning to one political side, Burns gives a balanced approach, leaving no stone unturned, from lambasting 24 for an entire nation rooting for Jack Bauer’s “anything goes” tactics to the portrayal of torture in Zero Dark Thirty. (Though the director has nothing against Kathryn Bigelow, rather the CIA feeding the filmmakers the story they wanted the public to hear.) His script is also full of memorable zingers that feels Sorkin-esque without the extraneous baggage. Getting perhaps the biggest laugh, Denis McDonough (Jon Hamm, in his most fitting post-Mad Men role) tells Dan, “Your report is 7,000 pages. The Bible told the entire history of mankind in less.”

Shot by Eigil Bryld (House of Cards, Ocean’s 8), he employs the Soderberghian touch of orange-yellow hues in during the earlier years of torture as if we can feel the suffocating agony coming off the screen during the handheld camerawork. The research years are painted in clinically blue light, full of slick dolly shots and rapid-fire shot reverse shot exchanges. The common ground among both, however, is the unceasing momentum, always cutting to a scene as if we’re immediately dropped into an already heated conversation.

Originally titled The Torture Report, that title actual first appears on screen before the middle is redacted, a not-so-subtle hint at the roadblocks to come for Jones and his team. While the first act can take some time to get the ball rolling as we fast-forward through Jones’ early days in Washington, D.C., Driver truly takes center stage when his character fights for his life to get this report in the hands of the public, the legal way. The intensity that was percolating in his years-long research boils over in when the report is past the finish line and he’s met with numerous obstructions. These gripping moments impress just as much as Driver’s subtle, naturalistic tics, tripping over a few words when he’s talking to a New York Times reporter or parsing out his good morning greetings when a colleague discovers he’s been up all night working. This is an actor who hasn’t been given a lead role quite of this magnitude yet and, to little surprise, he’s captivating throughout.

While Burns is certainly damning of the forces that let these tactics be utilized, the message of the film is ultimately more about coming clean as a nation for one’s mistakes and the oversight needed between branches to have a government of integrity. In searching for a convenient catharsis, the film can get a bit preachy in its final moments during virtuous speeches of morality, but it’s no doubt a lesson our current administration deserves to be reminded of.

The Report premiered at the Sundance Film Festival and opens on November 15.