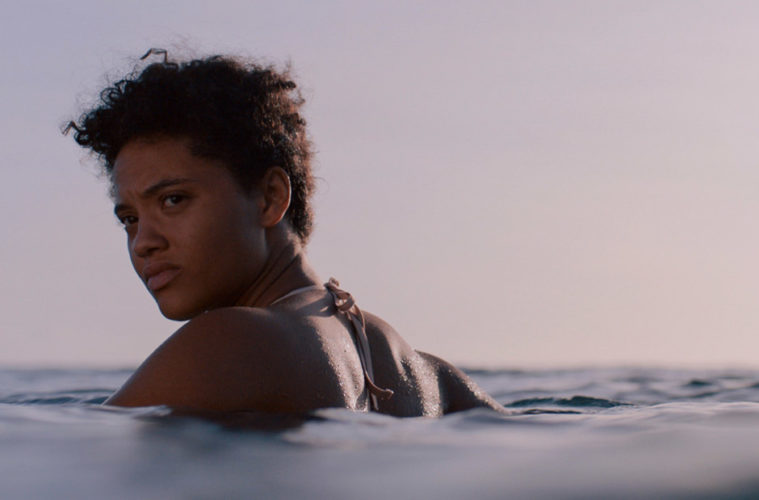 When Tom Hanks was stranded on an island alone in Cast Away, he got the better end of the deal than what Kiersey Clemons faces in Sweetheart. Not only must she try to survive with limited resources on a deserted island, but her character Jen must also fight for her life against a cruel, otherworldly creature. Perhaps just a touch too minimalistic as it proceeds, Sweetheart can feel held back in taking its limited conceit to more daring places, but in that sense it’s the quintessential Blumhouse production. JD Dillard’s Sleight follow-up occupies one location with little required for design and all contained within a brisk 82 minutes–each of which feature Clemons, in an immensely strong showcase for her talents.

Locked into Jen’s perspective, the film begins as she washes ashore alongside one of her friends, who is bleeding out after being impaled by a sea shell. Soon all alone, she finds traces of other inhabitants at a camp site, complete with pills, Gameboy, and a Scary Campfire Stories book. But they are long gone. It’s when night arrives that the true terror rises and makes its way ashore: a mysterious, large creature that is here to pull whoever is alive down into the depths of their realm. After a brilliant, jolt-inducing introduction, Jen must now learn new ways to protect herself each fateful night.

Dillard begins to add more elements into the mix in an attempt to expand Jen’s backstory, but these additions actually dilute the waters. As with any thriller that has so few moving pieces, further revelations are best left to be discovered, but when more dialogue finds its way in, the film starts to lose its pure visual powers. A too-obvious allegory comes to the surface as a nightly depression sets in and, again, without spoiling too much, no one else they may appear can match Clemons’ acting abilities. (Also, yes, the title does get explained and it gives even more motivation to Jen’s drive for survival.)

Cinematographer Stefan Duscio, who brought a similar level of nimbleness and vibrancy to another Sundance premiere Judy & Punch, once again excels here. Since there’s not a whole lot of reason for shot reverse shot on in this island, he utilizes a number of sturdy single takes to place us in the fearful mind of Jen and provide a well-calculated building of tension. It’s this nearly world-less first half that best shows off the demanding physicality, heart, and intensity that is required of Clemons and she more than pulls it off. By the finale, it’s clear that Dillard may not have sky-high aims, but Sweetheart proves to be a contained, diverting creature feature that will get your heart rate pumping.