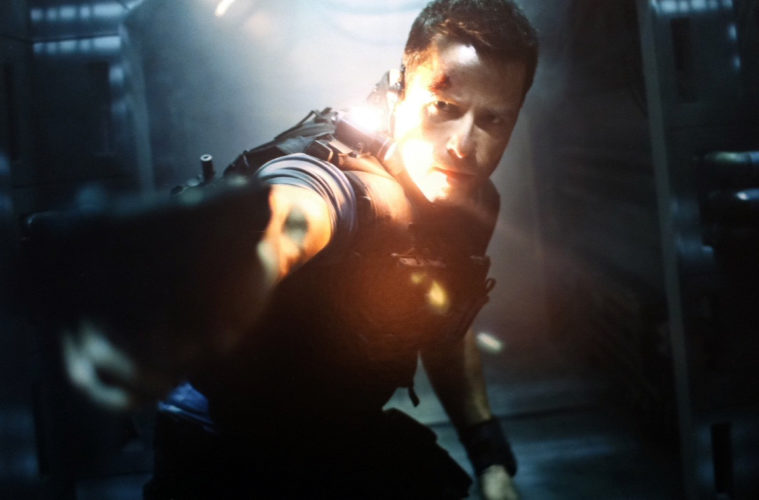 For many filmgoers, the knowledge of which studio is releasing what film they are seeing isn’t necessary to the experience, likely a minuscule effect of their decision. But it could mean the difference of where, when, how and even if you see a film. With that, we bring you the news that FilmDistrict is shifting their distribution plans for their upcoming 2012 slate.

We got word that their executive Bob Berney would be leaving the company (coming after his shingle Apparition folded), and now their CEO Peter Schlessel has finalized a 3-picture distribution deal with the newly launched Open Road to handle some of their films, Deadline reports. The first of the titles will be the Luc Besson-produced sci-fi thriller Escape From M.S. One, which was titled Lockout up to about yesterday, when the trailer hit. Starring Guy Pearce and Maggie Grace the film will arrive on April 20, 2012. Open Road will also be on board to distribute Red Dawn, the long-shelved remake that FilmDistrict picked up back in September. The action pic stars Chris Hemsworth, Josh Hutcherson, Josh Peck, Jeffrey Dean Morgan, Adrianne Palicki, and Brett Cullen. As for the third title, it hasn’t been decided yet, but could be Playing the Field starring Gerard Butler, from The Pursuit of Happyness director Gabriele Muccino or Taylor Hackford‘s Parker, which stars Jason Statham.

We already know that FilmDistrict has a partnership with Sony Pictures as well, so that big studio could be getting more responsibility when it comes to Rian Johnson‘s highly-praised sci-film film Looper, starring Joseph Gordon-Levitt and Bruce Willis. There is also the Evil Dead remake, but don’t expect a release until 2013 for that one. FilmDistrict may be back on their feet at that time, with Nicolas Winding Refn‘s Drive follow-up Only God Forgives. The Ryan Gosling-starrer was one of their big hits this year, along with Insidious and Soul Surfer, but they lost big on Johnny Depp‘s The Rum Diary, only scoring $13m off a $45m budget.

Reports indicate that the group is still up for purchasing films at Sundance next year, but Schlessel is hesitant and will scope out “the marketplace over the next six months” before coming to  final discusion on the future of the company. Check out his quote below.

“I’m taking a beat following the consolidation of our offices in Los Angeles to examine what distribution avenues are right for FilmDistrict and our slate. It became apparent that a variety of models may work for us in various situations. That includes distributing projects ourselves, partnering on distribution with companies like Sony and utilizing the experience of Tom and a company like Open Road. We had a very successful slate in 2011 and I anticipate it will be the same in 2012.”

FilmDistrict’s next title is In The Land of Blood and Honey this month, while Open Road will deliver The Grey in January.