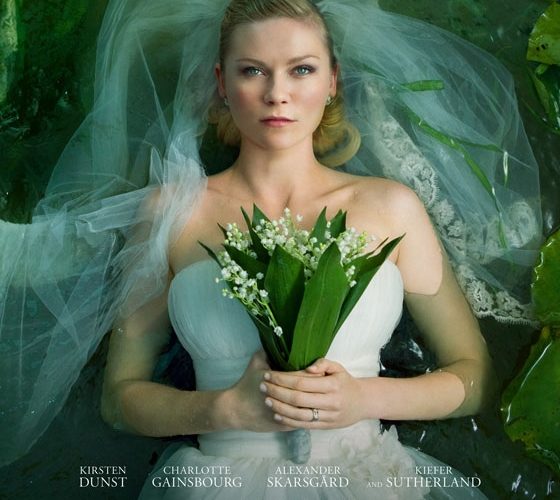 VOD must be quite a profitable avenue for Magnet, as they will debut Lars von Trier‘s highly-anticipated Cannes hit Melancholia on the digital platform over a month before its theatrical release in November. Vulture has the official US poster premiere (using the same key art as the rest) as well as the news of an October 7th, 2011 VOD release date for the drama starring Kirsten Dunst, Charlotte Gainsbourg, Kiefer Sutherland, Charlotte Rampling, John Hurt, Alexander Skarsgard, Stellan Skarsgard and Udo Kier.

It will then debut in theaters on November 11th, but it has also just been announced as part of the Fantastic Fest line-up. Check out their second wave of titles after the poster for the fest that runs from September 22nd to the 29th. BLIND (2011)
US Premiere
Director – AHN Sang-hoon, Korea, 111minutes
A blind woman narrowly escapes from the clutches of a serial killer.  When he circles back to get rid of any witnesses, the woman must rely on her other acute senses to identify and outwit the killer.

THE CORRIDOR (2010)
US Premiere
Director Evan Kelly live in person!
Director: Evan Kelly, Canada, 100 minutes
Five friends stay in a remote cabin for the weekend and uncover a supernatural anomaly in the woods.

EXTRATERRESTRIAL (2011)
US Premiere
Director Nacho Vigalondo and Producer Nahikari Ipiña live in person
Director: Nacho Vigalando, Spain, 90 minutes
A man wakes in a strange apartment after a long night of drinking. When his unfamiliar bedmate tries to usher him out, they both discover that spaceships are hovering over Madrid.

HEADHUNTERS (2011)
US Premiere
Director: Morten Tyldum, Norway, 100 Minutes
Roger Brown (Aksel Hennie) is good at two things: hiring people and stealing from them. He’ll risk it all when he meets a former mercenary who owns a painting worth millions.

THE INNKEEPERS (2010)
Director Ti West live in person
Director: Ti West, USA, 101 Minutes
Luke and Claire work the desk at a quaint, failing hotel. On their last night, these two amateur ghost-hunters try to capture definitive proof that their workplace is haunted. THE INNKEEPERS kicks off a Ti West retrospective at the Alamo Drafthouse sponsored by the Austin Film Society.

MICHAEL (2011)
US Premiere
Director: Markus Schleinzer, 96 minutes
Setting the record for the darkest of character studies, Markus Schleinzer’s compelling and surprisingly humorous directorial debut follows five months in the lives of a pedophile and the ten-year-old boy he keeps in the basement.

PASTORELA: A CHRISTMAS PLAY (2011)
World Premiere
Director: Emilio Portes Castro, Mexico, 90 minutes
Fantastic Fest again hosts another untraditional Christmas movie; this time Santa Claus is out and Satan is in. When Chucho (Joaquín Cosio) loses the beloved role of Satan in the town’s Christmas play and tries to reclaim the part, all hell breaks loose and an epic battle between good and evil begins.

SLEEP TIGHT (2011)
US Premiere
Director Jaume Balagueró live in person
Director: Jaume Balagueró, Spain, 102 minutes
The location is familiar (a vertical shaft Barcelona apartment building) but the story is markedly different in Jaume Balagueros (REC; REC 2) solo feature debut. Lonely doorman Cesar must do whatever is necessary to keep the neighbors from uncovering his dark, disturbing obsession for his favorite resident Clara.

SNOWMAN’S LAND (2011)
US Premiere
Director: Tomasz Thomson, Germany, 95 minutes
Tomasz Thomson’s SNOWMAN’S LAND is a bleak comedic thriller from Germany about an over-the-hill hit man who gets sent to the remote snow-covered wilderness to handle a job that may be his last.

THE SQUAD (2011)
World Premiere
Director: Jaime Osorio, Columbia, 107 minutes
Haunted by memories of their last mission, a feuding special ops unit is tasked to uncover the mystery of what happened at a desolate military base in this tense and claustrophobic South American thriller.

SUMMERLAND (2010)
North American Premiere
Director: Grímur Hákonarson, Iceland, 85 minutes
Oscar and Lara have an entirely normal family other than the fact that Oscar runs a haunted house in their basement and Lara speaks with elves.

YOU’RE NEXT (2011)
US Premiere
Director Adam Wingard live in person
Director: Adam Wingard, USA, 95 minutes
From the team behind the Fantastic Fest award-winning film A HORRIBLE WAY TO DIE, YOU’RE NEXT traps a family inside secluded mansion in the middle of nowhere. Outside the home is a group of animal-masked killers who take a stab at making sure none of them leave alive.