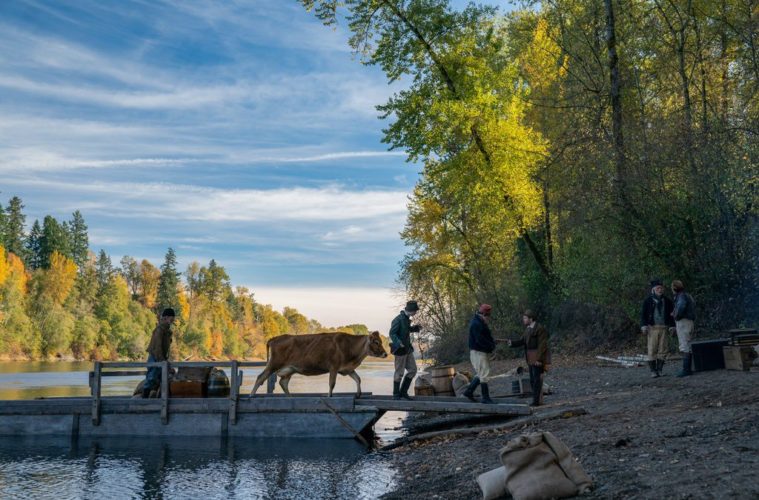 In First Cow, Kelly Reichardt carves out space for friendship and generosity amidst an otherwise selfish landscape. Set in the 1820s Pacific Northwest, a familiar realm for the Oregon-loyal Reichardt, the film’s twin protagonists are atypically sensitive souls, both towards each other and their environments, and yet they remain hyper-conscious of the cruelty that enervates within their community. Reichardt probes at the limitations of self-preservation as a life philosophy, even though it’s basically required to survive such a hardscrabble existence. What’s the purpose of survival if life doesn’t incentivize assisting your fellow man?

Loosely based on the 2004 novel Half-Life by Jonathan Raymond, a frequent Reichardt collaborator and the film’s co-writer, First Cow follows soft-spoken cook Otis “Cookie” Figowitz (John Magaro) as he travels with a group of hard-bitten fur trappers to a community trading post in remote Oregon. One night, Cookie spots a naked Chinese man, King-Lu (Orion Lee), hiding in the brush who claims to be on the run from Russian assassins. Instead of killing or turning him in, Cookie provides King-Lu with lodging and allows him to escape the trappers in the morning. When they later reconnect at the trading post, the two hatch a scheme to steal milk from a new cow recently purchased by the community’s wealthy English chief (Toby Jones) so as to cook goods for the traders. Their “oily cakes,” made by Cookie and sold by King-Lu, eventually find their way back to the chief, opening the duo up to discovery.

After six features over 25 years, Reichardt finally has a large enough filmography for her latest to actively court comparisons to her previous works. The relationship between Cookie and King-Lu recalls the longtime friends in Old Joy. The setting and time period, not to mention the 4:3 aspect ratio, evokes Meek’s Cutoff. First Cow even opens with a modern-day prologue featuring a woman (Alia Shawkat) and her dog, a la Wendy and Lucy, discovering two skeletons, presumably our two heroes, in the wilderness. However, these allusions don’t connote a culmination of any kind, but rather a refinement of aesthetic and thematic interest. First Cow is merely the latest in a career built upon character portraits rooted in observation and grace notes.

Before the film’s plot, such as it is, kicks into second gear, Reichardt builds out the central relationship simply by watching the two men become comfortable with the other. Reichardt’s knack for depicting the unique awkwardness of male friendship pays off dividends here as Cookie and King-Lu slowly get to know each other in the relatively safe confines of the camp. They initially circle each other like animals, trying to sniff out potential hazards, before eventually settling into an easy rhythm where food and drink can be shared and respective dreams can be articulated. Christopher Blauvelt’s precise, boxed framing excels when it directs the gaze towards Reichardt’s subjects, whether they’re still or in motion. They are fundamentally at odds with the territory, temperamentally and, in the case of King-Lu, racially. As such, they operate like ripples in an otherwise undisturbed body of water.

Reichardt’s signature low-key tone doesn’t obscure the inherent danger baked into the trading post community, but she also creates room for humor and calm. Assisted by William Tyler’s warm acoustic score, she emphasizes hunger as the great equalizer amongst even the harshest men, and how the presence of food, let alone good food, can allow for vulnerability and joy. The English chief might be a pretentious fop, but his considerable delight from tasting the oily cake succeeds in humanizing him even briefly. The men, borne out of the roughness of the wild, suddenly soften when in the presence of Cookie and King-Lu’s food, like children itching for their mother’s home cooking. First Cow even presents a semi-utopic environment in which the white majority and the Native community coexist peacefully, epitomized by the chief’s marriage to an indigenous woman (Lily Gladstone). Their enlightened exteriors obviously belie their colonial and/or parochial worldviews, but Reichardt still manages to throw the film’s clear villains in a slightly skewed light.

Still, it’s First Cow’s buddy relationship that instills the film with a reserved, yet palpable emotional core. Reichardt is never better than when she highlights unsung gestures of kindness, such as when Cookie takes the time to flip over a salamander on his back, or when he christens King-Lu’s cabin with some picked flowers, or him whispering gentle words into the cow’s ears as he milks her udders. For a while, the sweet King-Lu seems like the capitalist schemer, a necessary disposition adopted to survive in a white man’s world. But King-Lu makes a surprising choice late in First Cow that pushes the film into purely romantic territory. First Cow might be a period piece, but as America descends into a late-capitalist hell of its own creation, Reichardt interrogates the importance of emotional bonds in a world ruled by avarice. Her quasi-literal evocation of the Beatles’ “Can’t Buy Me Love” might be one of her best gambits to date.