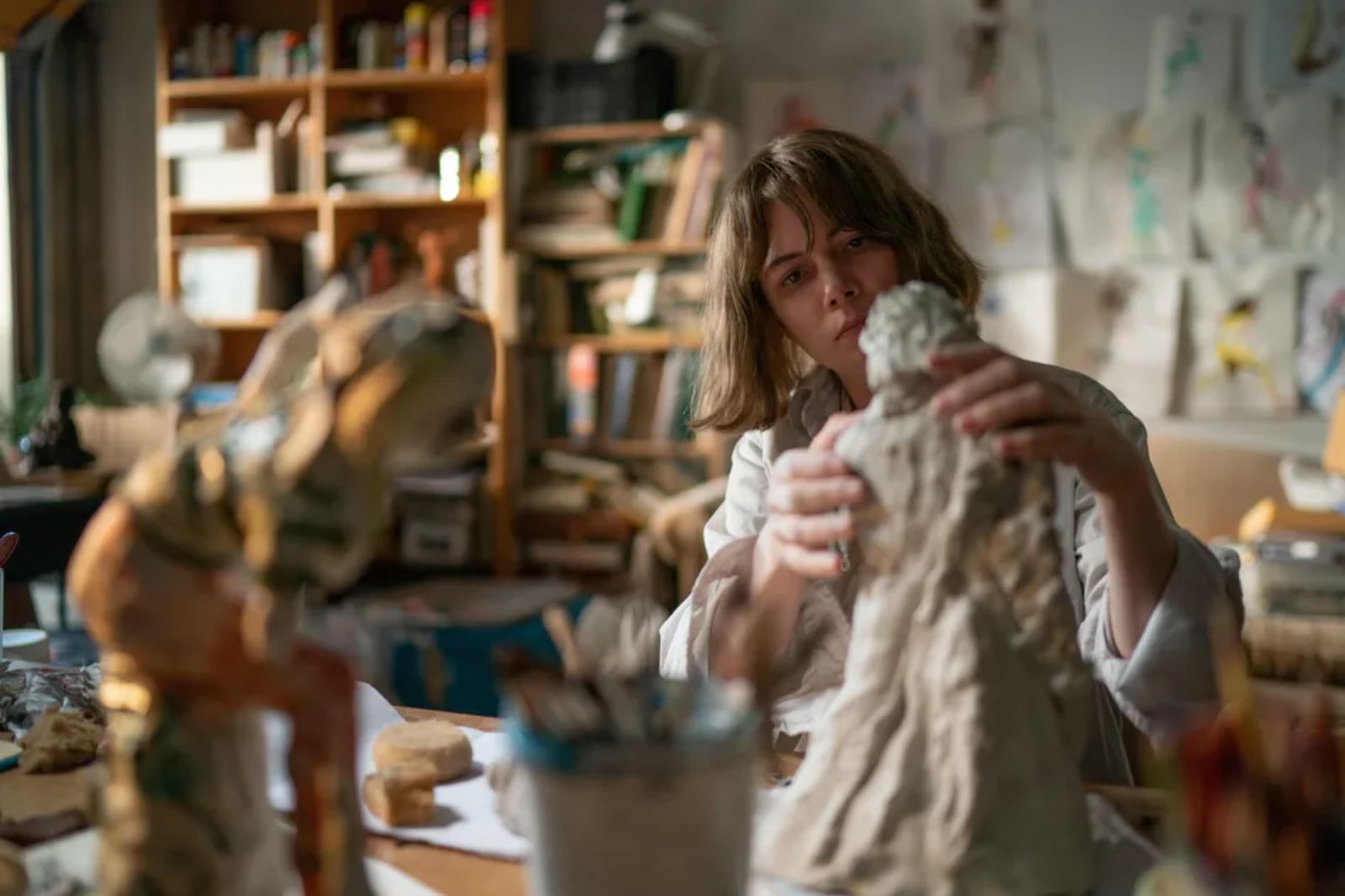 Two years after First Cow, which we collectively named our favorite film of 2020, Kelly Reichardt returns with a work like a line drawing: neat, lean, evocative. Showing Up is about art, how art is made, and the people who use their time to make it. It stars Michelle Williams, an actress who has always been at home to the quiet rhythms of Reichardt’s filmmaking, appearing over the years as a down-on-her-luck drifter in Wendy and Lucy (2008), a settler on the wagon trail in Meek’s Cutoff (2011), and as a woman burdened by a belittling man in the director’s anthology Certain Women (2016).

In Showing Up, Williams plays Lizzie (endlessly endearing in crocs, bob cut, and sensible linens), a sculptor who is neither famous nor struggling, but somewhere in-between: an undefined lower-middle-class of artist that cinema tends to overlook. Lizzie is hard-working, passionate about her craft, protective of it, and rather good at what she does (foot-high clay sculptures of women in motion that she refers to pronominally). The bullish ambition of youth has passed, if she ever had it; her main concerns these days are as modest as keeping the hot water on.

Yet it isn’t just a story about midlife melancholy, though there’s plenty of that on offer. Told in Reichardt’s clear aesthetic language, Showing Up is reminiscent of Jim Jarmusch’s Paterson, another film drawing clean lines about the meditative joys of creating things; and just like Jarmusch’s bus-driving poet, the suggestion that Lizzie is especially talented at what she does or might “make it” is not the ultimate aim. Reichardt is more interested in showing the measured flow of her creative process, the pace and intimacy of it, how it steadies her.

It’s also a work about imposter syndrome. Reichardt sets most scenes in the Portland art school where Lizzie works. Her mother (Maryann Plunkett) is the school’s administrator as well as her boss. Her father (a nice turn from Judd Hirsch) is also a ceramics artist and, unfortunately for Lizzie’s confidence, one of some renown. Her brother Sean (First Cow‘s John Magaro) rarely leaves the house these days, and appears to suffer from something akin to bipolar disorder, though Lizzie’s mother is quick to remind her of how how much potential he once had. In Williams’ slumped shoulders you can sense feelings of inadequacy.

Through the school, Reichardt introduces a smattering of likeable eccentrics (though this is Portland, so safe to say they will not be to everybody’s tastes). There is Eric, who runs a sculpting class and operates the kiln where Lizzie fires her work; he is played by André Benjamin, whose deliciously greying hair only adds to his charisma. “There’s spontaneity in that pot,” he tells one student, “it’s its own thing.” There is Marleen (Heather Lawless), a supportive teacher taking an interest in Lizzie’s work; and there is Jo (Hong Chau), who works in textiles and, with two auspicious exhibitions in the works, might be on the cusp of some success. She’s also Lizzie’s landlord and neighbor, which doesn’t much help.

Showing Up premiered at Cannes in a final-day slot that gave it the feeling of a grace note: a quiet coda to two weeks of weighty political allegory. To its credit, Reichardt’s film is in no rush to explain itself: its story is simple and told with clarity, yet something lingers with you. The dramatic catalyst is nothing more than an injured pigeon that Lizzie and Jo agree to take care of. Lizzie, of course, will end up doing most of the work, resorting to passive-aggressive texts and struggling to hide her general indignation at Jo’s pep and flourishing success. (We’ve all been there.)

It’s not surprising that there are so few films centered on this world, and fewer still competing for cinema’s great prizes. The art scene usually lends itself best to filmmakers denigrating its charlatans (you might even win a Palme d’Or for that) or deconstructing its accepted geniuses. Reichardt takes a jab or two at some of the hippy-dippy practices of Lizzie’s art school, but Showing Up is compassionate toward the efforts of teachers, artists, and students. Whether or not it goes anywhere, Lizzie’s pursuit has been a personal one. You sense Reichardt’s has too.

Showing Up premiered at the Cannes Film Festival and will be released by A24.