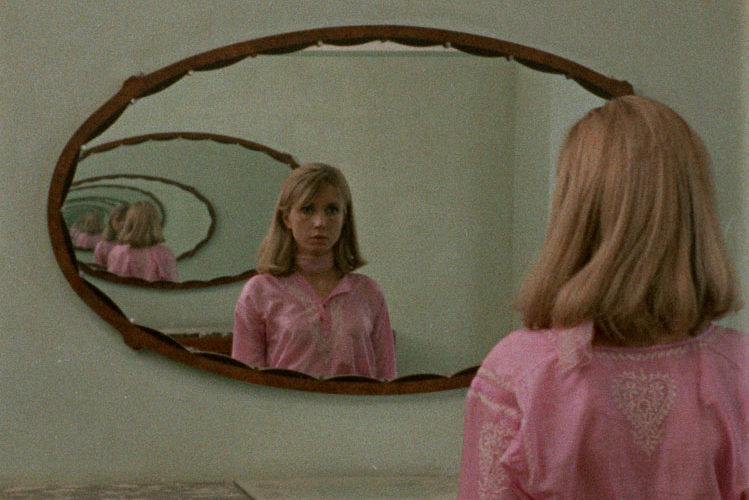 This is the final weekend for marathon screenings of Out 1. We highly recommend taking the plunge.

“Lonely Places: Film Noir and the American Landscape” highlights a different atmosphere of the noir picture, and it makes its case with some great films. Out of the Past shows on Friday; Saturday offers Ophüls‘ The Reckless Moment and Aldrich‘s Kiss Me Deadly; Sunday, one can see Nightmare Alley, The Amazing Mr. X, and an encore of the Tourneur picture.

“To Save and Project” continues, with Fellini‘s Amarcord on Friday and Akerman‘s Jeanne Dielman and Je, tu, il, elle showing on Saturday and Sunday, respectively.

“Cate Blanchett: A Tribute” closes out with The Good German and I’m Not There on Saturday and Sunday, respectively.

35mm prints of Strange Days and The Killing of a Chinese Bookie screen at midnight and before noon, respectively

Nicholas Ray’s Johnny Guitar has been restored and will begin a new run.

Janeane Garofalo will present The Hot Rock on Saturday; on Sunday, Larry Wilmore is presenting The Parallax View. Both are on 35mm.

A restoration of Robert Flaherty‘s Moana with Sound plays throughout the weekend.

A tribute to curator Jack Smith will have several titles on tap, including Visconti‘s The Leopard and Bresson‘s Les dames du Bois de Boulogne.

In keeping with recent news, Goodfellas will screen at midnight this Friday and Saturday.