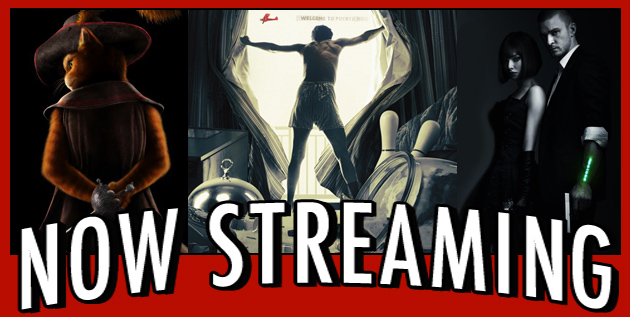 [Now Streaming] Your ‘Puss in Boots,’ ‘The Rum Diary’ & ‘In Time’ Alternatives Each week within this column we strive to pair the latest in theatrical releases to worthwhile titles currently available on Netflix Instant Watch. This week we offer alternatives to Puss in Boots, The Rum Diary and In Time.

This Friday a pop star-turned-action star battles time and its wealthy rulers, while a costumed cat seeks a sky-high dream and a drunken Lothario goes abroad for romance and rum. But if these flicks cannot quench your thirst for fractured fairy tales, sci-fi thrills and angst-ridden anti-heroes, we’ve got you covered with a tantalizing selection of choice movies available online. DreamWorks Spooky Stories (2009) DreamWorks is shamefully stingy on the titles they stream, save for this cheeky three-part Halloween special that boasts a string of short and spooky stories featuring the familiar characters from Shrek and Monsters vs. Aliens. This quirky cartoon offers kid-friendly takes of Bride of Frankenstein, Fatal Attraction, Night of the Living Dead, Psycho, and The Exorcist, as well as featuring voicework by Mike Myers, Antonio Banderas, Hugh Laurie, Seth Rogen, Reese Witherspoon and Kristen Schaal. [For more mature Halloween fare, check out last week’s Now Streaming Halloween Edition.]

Jim Henson’s the Storyteller (1987) John Hurt stars as the titular tale-teller in this BAFTA-winning fantasy series that features some of Jim Henson’s most disturbing Muppets. Each week Henson and company displayed a new take on an old tale, weaving themes of fear, courage and honor for audiences young and old. Though each episode is extraordinary, my personal favorite is “Hans My Hedgehog,” a bit of German folk lore that is as beautiful and bittersweet.

Thumbelina (1994) For something a bit brighter, stream Don Bluth’s kinetic animated adaptation of Hans Christian Andersen classic tale. Jodi Benson (the voice of Disney’s The Little Mermaid) brings a sparkling tone to a tiny young woman on a big adventure. Only as tall as her mother’s thumb, Thumbelina longs for a love all her own – which she discovers in a happenstance meeting with a fairy prince! But before the two can celebrate their happily ever after, she’s kidnapped by a tenacious family of toads!

Based on Hunter S. Thompson‘s novel, this Bruce Robinson-directed adventure follows a booze-swilling and bored American journalist (Johnny Depp) to 1950s Puerto Rico, where he enters a world of intrigue after falling for a glamorous young American woman (Amber Heard). Gonzo (2007) For deeper insight into the curious mind of Hunter S. Thompson, check out this thoughtful documentary from Oscar-winning director Alex Gibney. Johnny Depp narrates, leading viewers through home movies, audiotapes and unpublished materials that offer a new insight into the much-examined father of Gonzo journalism.

In a world where long life and eternal youth is a luxury of the rich, Will Salas (Justin Timberlake) is set to die – until a stranger mysteriously awards him more time…and a new list of enemies. As he races against time, he forms an unlikely romance with a sultry yet sullen socialite (Amanda Seyfried). Olivia Wilde co-stars in writer-director Andrew Niccol’s latest sci-fi adventure. Sci-fi in all its forms are now streaming:

Simone (2002) Al Pacino stars in Niccol’s Hollywood-set comedy as a flailing film director who brings new life to his career by covertly creating the perfect ingénue: Simone, a beautiful and tender actress who is completely computer-generated. But as buzz builds about this mysterious new It Girl, how can her creator/director keep her shocking secret under wraps?

TiMER (2009) For another take on time, try this witty sci-fi-centered rom-com. Set in a world where a timer, which can be installed in your wrist, displays a countdown to the moment you meet your soul mate, this indie effort is full of cheek and charm thanks to its flustered yet endearing lead Emma Caufield. Emma plays Oona, a woman who grows increasingly panicked as she nears 30 with a timer that hasn’t begun ticking down. Fixated on when she’ll meet her perfect match, she initially ignores any man whose timer has a countdown going, but has a change of heart when she meets a disarming younger man.

Gamer (2009) Want something with less romance and more action? Try this absolutely mad sci-fi adventure. Gerard Butler stars as Kable, a wrongfully convicted man given a risky chance at freedom if he survives the violent competition created by a maniacal genius (Michael C. Hall). Now, this thriller has a barely sensible plot line, but it’s packed with action and contains a late-in-the-game scene so demented it’s worth watching. When you hear finger-snapping, you’ll know what I mean. It’s awesomely absurd and makes me wish for Dexter: The Musical. Howl’s Moving Castle (2004) Just in time for Halloween, Hayao Miyazaki’s Oscar-nominated adaptation of Diana Wynne Jones‘ novel offers all kinds of curious monsters. When homely haberdasher Sophie (Emily Mortimer) unexpectedly attracts the notice of the handsome wizard Howl (Christian Bale), the evil Witch of the Waste (Lauren Bacall), incensed with jealously, casts a terrible curse that renders Sophie ancient before her time. Now, to get back the life that was recklessly snatched from her, she must leave her little town behind and travel into worlds unknown! Along the way, she’ll meet a spirited sorcerer’s apprentice, a loquacious fire demon (Billy Crystal), and a mute but helpful scarecrow. While the story is winding (and sometimes confounding), Miyazaki’s heralded animation is filled with his trademark mix of whimsy and horror, making a film that is deeply compelling.