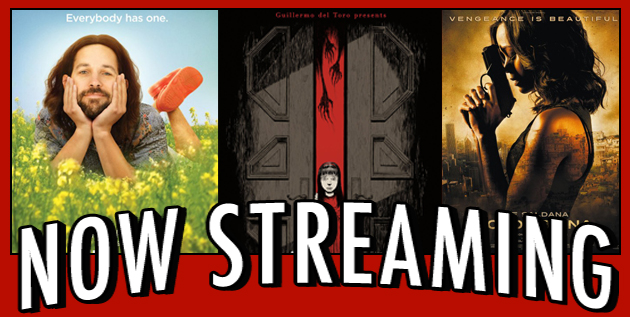 [Now Streaming] Your ‘Our Idiot Brother,’ ‘Don’t Be Afraid of the Dark’ & ‘Colombiana’ Alternatives Each week within this column we strive to pair the latest in theatrical releases to the worthwhile movies streaming online via Netflix Instant Watch. This week we look at alternatives to Our Idiot Brother, Colombiana and Don’t Be Afraid of the Dark!

This week there’s a dark theme lurking in theaters, where three innocents will have to confront some intense drama. Be it sneering sisters, creepy creatures or a painful past, these protagonists journeys are punctuated with poignancy and shouting!

Paul Rudd stars as the title moron, the good-natured but naïve Ned, who becomes a burden on his three sisters (Emily Mortimer, Elizabeth Banks and Zooey Deschanel) after he’s busted selling dope to a cop. Adam Scott, Rashida Jones and Steve Coogan co-star in this Sundance-adored family-comedy, directed by Jesse Peretz. The Chateau (2002) Jesse Peretz and Paul Rudd first teamed up on this 2001 dramedy that focuses on the fraught fraternal relationship between two unlikely brothers (Rudd and his 40-Year-Old Virgin co-star Romany Malco) who inherit once opulent French chateau. These easy money-seeking, non-French-speaking Americans soon run into troubles with the chateau’s staff when they announce their plans to sell, and their subsequent unemployment.

The Baxter (2005) Paul Rudd and Elizabeth Banks both appear in their Wet Hot American Summer co-star Michael Showalter’s indie rom-com, inspired by the classic comedy-noir The Apartment. Here Showalter plays a lovable loser whose forced to face-off against his fiancée’s high-school sweetheart when the pair unexpectedly reconnect. Indie It Girl Michelle Williams co-stars.

The Vicious Kind (2009) Brother co-star Adam Scott stars in this jet-black indie-comedy that centers on a manic insomniac (Scott), whose loyalty to his gullible little brother (Alex Frost) leads him to war with his widowed father (J.K. Simmons) and viciously threaten his brother’s new emo-styled girlfriend (Brittany Snow). For all the film’s pathos, director Lee Toland Krieger manages to achieve a tone that’s wickedly funny and surprisingly sexy. The Signal (2006) This Spirit Award-nominated horror flick follows a taut love triangle as they traverse the treacherous terrain created by a strange signal that turns half the population homicidal. It’s a deeply twisted tale of love and loyalty that is split into three distinct acts, directed by different directors (David Bruckner, Dan Bush and Jacob Gentry) and ranging in tone from frightening to farcical. It’s something special. Check it out now.

A Tale of Two Sisters [Janghwa, Hongryeon](2004) Acclaimed Korean director Ji-woon Kim first drew notice Stateside with this cryptic horror film. Returning home from a much-needed stay in an asylum, a traumatized pair of sisters suspects their stepmother is harboring a dark secret.

The House of the Devil (2009) Another indie effort, Ti West’s earnest homage to 1980s horror is a master class in building tension. With its creeping pace and restrained approach, this tale of a babysitter with devilish clientele teases with a slow-burn style of scares. Jocelin Donahue, Tom Noonan and Greta Gerwig co-star

Luc Besson, the adored creator of Leon: The Professional, co-wrote and produced this revenge-driven action-adventure starring Zoe Saldana as a gorgeous assassin on the hunt for the men who years before killed her parents in front of her. Michael Vartan  and Cliff Curtis co-star. Sympathy for Lady Vengeance [Chin-jeol-han Geum-ja-ssi] (2005) The third and final film in Korean director Chan Wook Park’s revenge trilogy, Lady Vengeance is a sleek yet gritty story of vigilante justice. Yeong-ae Lee stars as a wronged woman who seeks to get back the life one man’s betrayal once ripped from her, and enact a gruesome (yet satisfying) punishment of her own divining. While each of Park’s trilogy is striking, this one is a personal favorite for its poignant emotional journey and for containing one of the most devastating scenes of violence I have ever witnessed.

The Girl with the Dragon Tattoo [Män Som Hatar Kvinnor] (2009) Based on Stieg Larsson’s internationally acclaimed mystery novel, this Scandanavian adaptation stars rising international star Noomi Rapace as the already iconically badass Lisbeth Salander, a streetwise hacker who manipulates the cruelty of man for her own mechanizations of revenge. Check it out streaming as you wait for David Fincher’s version to hit theaters this Christmas.

Foxy Brown (1974) Long before the above antiheroines revealed their dark tales, Pam Grier was making a name for herself by combining sex and violence with a sassy panache in a string of blaxploitation features. One of her most memorable is this tale of the aptly named Foxy Brown, a woman who goes undercover in at a high-class brothel to find the men responsible for the murder of her boyfriend…and make them pay. Tangled (2010) After all these dark tales of monsters and murder, I’ve selected a lighter feature for this week’s Wild Card. Thanks to some lackluster marketing (including this uninspired American-version title), this Disney feature disappointed on the domestic market. However, with its lushly crafted CGI animation and a whimsical tale complete with catchy new song numbers and a delightful band of colorful characters, Tangled is easily one of the best-animated films Disney has produced since their early ’90s heyday. In this re-imagined fairy tale, Mandy Moore provides the voice to young Rapunzel who has long been locked away in an isolated tower with only her pet chameleon and passive-aggressive mother (a bitingly funny Donna Murphy) for company. However, when a self-involved thief (Zachary Levi) who is on the lam happens upon the girl and her forced sanctuary, Rapunzel takes this fateful opportunity to blackmail the young ruffian to serve as her guide as she secretly explores the world beyond her window. With it’s balance of keen visual storytelling, rousing action sequences, exhilarating musical numbers and whip-smart humor, Tangled is a gorgeous addition to the Disney catalog that’ll make you feel like a kid again.

Have Netflix Instant picks of your own? Share them in comments!