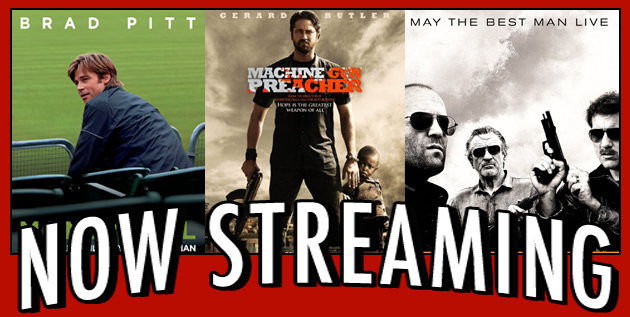 Each week within this column we strive to pair the latest in theatrical releases to the worthwhile titles currently available on Netflix Instant Watch. This week we look at alternatives to Moneyball, Machine Gun Preacher and Killer Elite.

With the cold weather barreling in, theaters across the country brace for docudrama-rama! Trailers boast “based on a true story” as an A-lister rubs elbows with a fat funnyman, an action star tries for Oscar-baiting, and badasses new and old unite in a gritty action-thriller. Want more? Well, if Netflix news has you spinning, take a seat and indulge in some true-life drama, wild action flicks, and wonderfully sweet and strange, indie rom-com wild card. Are you a fan of sports tales based on real events? So are we:

Chariots of Fire (1981) This may be one of the most acclaimed sports dramas in history, having been nominated for a whopping 7 Oscars and winning 5 – including Best Screenplay and Best Picture. Ben Cross and Ian Charleson co-star as a pair of British track stars tirelessly pursuing Olympic gold.

Friday Night Lights (2006) Based on the film that was based on the true inspiring tale of a football-obsessed Texas town, this Emmy-winning series centers on the team’s new coach (Kyle Chandler), his wife (Connie Britton) and teenage daughter (Aimee Teegarden). But this gripping drama expands to explore stories of a troubled bad boy, and arrogant star, a crippled QB, and so many more. But best of all you don’t need to be a football fan (or even understand the rules) to fall under this series’ sway. It’s addictive drama. The Kite Runner (2007) Marc Foster, whose last effort was the Bond thriller Quantum of Solace, first tackled issues of third world strife in this fraught adaptation of Khaled Hosseini’s heralded novel. Set in Afghanistan through the fall of its monarchy, Soviet Invasion, and the rise of the Taliban, the story follows a young boy as he tries to navigate the treacherous and changing landscape of his homeland.

Goodbye Solo (2008) Machine Gun Preacher co-star Souleymayne Sy Savane made his film debut in this bittersweet tale that centers on unexpected friendship that forms between a suicidal old white man and an ever-optimistic Senegalese taxi driver. Understated and unshakeable.

Dog the Bounty Hunter (2004) Okay. To be honest, I can’t help but suggest this. The premise of Machine Gun Preacher, where a former junkie/biker becomes a Christian soldier dedicated to giving people second chances, sounded a lot like Duane “Dog” Chapman who uses his belief in Jesus, his brute strength and his leather bound crew to bring parole breakers to justice. All 8 seasons are now available.

Also “based on a true story” Jason Statham heads this action-packed thriller that follows a former British special ops agent who busts out of retirement to rescue his grizzled mentor (Robert DeNiro) from his cruel captors. Clive Owen and Dominic Purcell co-star. Cop Land (1997) Robert DeNiro (in true mentor fashion) first paired with Stallone in this gun-blazing thriller that takes itself a tad too seriously. Stallone stars as a good cop who is tired of the corrupt politics of his police-laden town. Harvey Keitel and Ray Liotta co-star.

The Gravedancers (2006) For some action with a supernatural bend, try this grisly horror-thriller that features Elite’s Dominic Purcell as a married man with no respect for the dead. When he and a few of his buds dance on graves after a friend’s funeral, they open a door to hell, releasing the ghost of a pyromaniac, a rapist and axe murderer – poltergeists dead-set on haunting these dancers to graves of their own. While some of the effects are hokey, this low-budget horror flick is delightfully disturbing and thoroughly frightening. This week’s Wild Card has been selected by fellow Film Stager, the always funny and often outraged, Jonathan Sullivan:

Ceremony (2010) The feature film debut of writer/director Max Winkler, CEREMONY follows struggling children’s author Sam (Michael Angarano) as he crashes the weekend wedding festivities of former flame Zoe (Uma Thurman) in hopes of winning her heart back. I watched this on a whim last weekend and from the opening scene, it completely won me over; the characters are memorable, the dialogue sharp, and the pacing moves swiftly without unnecessary plot detours. More importantly, it’s funny as hell in a clever and whimsical way and in my opinion it’s the funniest movie to come out this year. Unlike most quirky indie comedies/love stories, CEREMONY doesn’t make you wish you stuck your hand down the garbage disposal instead and that to me is the highest praise you can give a movie.