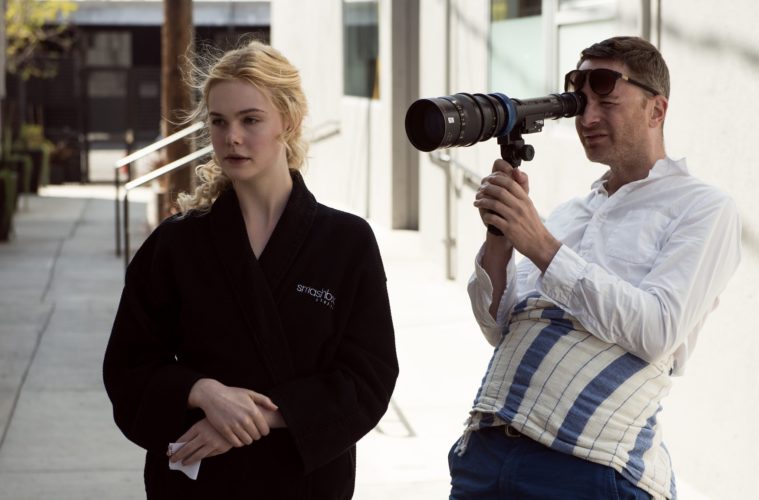 The Neon Demon will eventually elicit some strong reaction from every viewer, and Nicolas Winding Refn has made clear that it shouldn’t be any other way. Our review was among the most negative we posted at Cannes, speaking for both its immediate grade and the force of its criticisms, and our own Brian Roan experienced something that, had it gone just a bit further, would be plastered across every one of the film’s TV spots and Blu-ray cases. Winding Refn seemed rather amused when I showed him the tweet on my phone, though his verbal response was terse: “I have two kids, so I know what it’s like.”

Despite the stated desire to provoke, there’s a clear humility when discussing The Neon Demon‘s development, and this writer-director — one who’s often held as a symbol of masculine-artist impulses run rampant — often admits that his film wouldn’t exist without female input in every direction. If you’ve seen his wife’s documentary, My Life Directed By Nicolas Winding Refn, you’ll know he’s hardly as brash behind the scenes as his work and public image would often suggest — so what better place to start than there?

The Film Stage: I recently watched My Life Directed By Nicolas Winding Refn, in which your wife, Liv Corfixen, documents the troubling process of making Only God Forgives. Being that your doubts about creative choices and their final result are very clear therein, I wonder how moving away from that troubled project affected The Neon Demon.

Nicolas Winding Refn: Well… the reality is the same thing on every movie. It’s, like, the same process. For Liv, it’s, “Well, here we go again.” [Laughs] The closest thing I’ll ever get to going into labor.

Years ago, there was word that you were working on a Miami-set, Carey Mulligan-led horror film called I Walk with the Dead. A lot of people believe The Neon Demon is an outgrowth of that.

Other than, say, the changing of a lead actress and location, how did it clearly evolve from that original concept?

Because I realized I wanted to make a teenage horror film, and it had to be about beauty. Suddenly, from that perspective, I Walk with the Dead was no longer interesting to me. It needed a new cast; I needed a sixteen-year-old girl. So… [Laughs] there were some practicalities as well. You know, I like to say one thing and see where it takes me, because it’s usually somewhere else.

It’s like… I love television. Not so much what’s on the television, but I love the concept of the television. I thought, “God, I wonder what it would be like doing ‘an Internet movie’ that would be chopped up into small pieces, because the television allows that possibility.” “The digital link.” The iPhone; the iPad. Whatever. The idea of a screen. Those kind of ideas, of a screen, the different things can inspire me to want to indulge in it.

Here, there’s the new process of working with these co-writers: Polly Stenham, an experienced playwright, and Mary Laws, a Yale graduate who’s a relative newcomer. What do they each bring as experienced and nascent voices, and how do you interact with those?

I wrote the story, to begin with, because I had this idea. When I was done figuring out where I wanted to start and wanted to get to, which is the basis of structure, I felt that, along the way, I should feed off as many women as I could. So I first went to the U.K. and hired a very famous playwright called Polly Stenham, and I worked with her for a number of months — and that was cool. Very interesting. But then I kind of felt, “Now I should continue to feed.” So I left the U.K., because, at this time now, L.A. became the place to shoot the movie, and I hired an unknown student at Yale called Mary Laws, who’d never written a screenplay and was also a playwright. Then I worked with her for a number of months.

And then I kind of just moved on. It’s like going through people and making what you want — and then you leave. But it wasn’t really until I hired Elle Fanning that it kind of became clear what it was going to be. Like, everything of the journey of starting in my kitchen in Copenhagen, ending with meeting Elle Fanning in my house that we were renting in L.A. [Makes arc with forefinger] There to here. It had been this kind of arc, but it had never been more clear what it was going to be to me until I met her. Then everything from the past was erased, because now I knew what the essence was going to be. I knew who my alter-ego was going to be. I knew, at the beginning — over here — that this is where I wanted to start and this is where I wanted to get to, and I’d gone through this journey of figuring out the best possible way, but never really finding the solution — until I met Elle Fanning. Does that make sense?

It does, and it leads into what I wanted to ask about your cinematographer, Natasha Braier, who you’ve never worked with before, and who is your first female DP.

With that in mind, talk about what she, specifically, brought here that would’ve otherwise been missing.

Well, it’s hard because I don’t know. [Laughs] But I think that what she very much came with — besides just being a fucking great photographer — was the attention to female detail that was very much… that I don’t think a lot of men would obsess about. Which was great. Or from a different perspective. But, I mean, in terms of work: I set up the framing — I compose the image — and then she lights it. But I loved working with her — so much that I want to do it again. I’ve used her on commercials ever since. But you can kind of say that, with Elle and Natasha, we were off to the races.

Can you name some specific examples, images, that have her signature? It might be all of the images, for all I know, but do any particular moments that immediately jump out as something that she “got” more than anyone else might have?

The great thing about Natasha was that, when I hired her, she very quickly went to the lens houses and got special lens made. I make very inexpensive movies, so it was, like, the most expensive thing I had on the camera crew. [Laughs] They were these special lenses. I wanted to shoot digital, because I love the digital feel, and so that was great, because it was all about the close-ups, that would really help us with our close-ups of the women. So that was a very huge contribution.

I’m colorblind, so it had to be in my color palette — which I knew was new to her, because I can only relate to colors that I can see. And then we started playing with a lot of flares. That became, like, an obsession of ours. “How many flares can we get in?” We were very similar, very quickly, about, “Oh, look at the curtain. We need to look at the curtain. Check the curtain! Don’t start until the curtain is correct.” We both had obsessiveness [Laughs] about the smallest elements. It was just a really wonderful relationship, to work together.

You’ve said in interviews, as you’ve said here, that The Neon Demon presented an opportunity to indulge in your desire to be a sixteen-year-old girl. When did you struggle or fail to connect with that desire? Where did you feel the clear distance between yourself and that idea?

Well, of course, there are obvious things that are, you know, very different — but, at the same time, really not. That’s why I needed Elle Fanning: I needed Elle Fanning and me to become one person. Just like I’d done with Ryan [Gosling]. It was like a mutation: you become your alter egos and you live out your fantasies through it — but with a woman, of course, it’s more… strange. Especially a teenage girl — it’s even more strange. But coming up with this mutation between Elle and myself, you learn all the things you needed to know and understand.

This is one of the reasons I like this movie: it feels alien and foreign in that way, and ultimately is rather effective.

The idea is that the film would eventually become a science-fiction movie.

Which I think you fulfill with the… I wouldn’t say it’s “a blood”… I’m sure you know what shot I’m specifically referring to.

I think you reached some unique point there.

Creativity is about an experience. Like what your friend tweeted: “labor time.”

I’ll be sure to tell him that, and I’m certain the child will have a good story to tell when they grow up.

Oh, absolutely! That’s got to be a part of it.