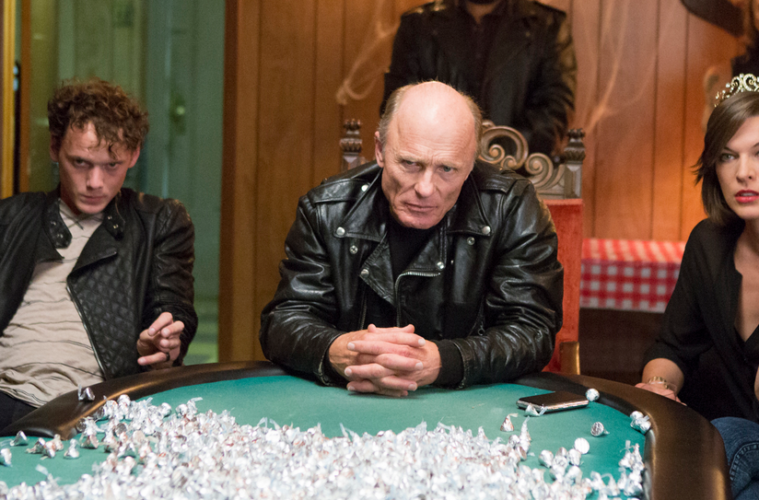 While a premiere isn’t occuring until tomorrow at Venice Film Festival, director Michael Almereyda has reason to celebrate concerning his modern-day adaptation of Shakespeare’s play Cymbeline. The film was just picked up by Lionsgate’s Grindstone Entertainment for a U.S. release next spring, and now they’ve dropped a new trailer and the first clip for the project.

Starring Milla Jovovich, Ed Harris, Dakota Johnson, Penn Badgley, Anton Yelchin, Ethan Hawke, John Leguizamo, and Bill Pullman, the story follows “an epic battle between dirty cops and a drug dealing biker gang, set in a corruption-riddled contemporary America.” The new footage sells an intense-looking drama, while the first clip follows Harris’ character before a gunfight. Check out the trailer and clip below, along with the synopsis and new stills.

King Cymbeline, leader of the Briton Motorcycle Club, clashes with the corrupt Roman Police while his radiant but disobedient daughter Imogen fends off assaults on her honor and her life. Cymbeline’s wife and her son aspire to take over the king’s empire, and Imogen’s marriage to Posthumus is undermined by sinister interference from Iachimo, a malevolent stranger. Shakespeare’s timeless themes are love and betrayal, revenge and forgiveness, death and renewal. Cymbeline will be released in spring 2015.