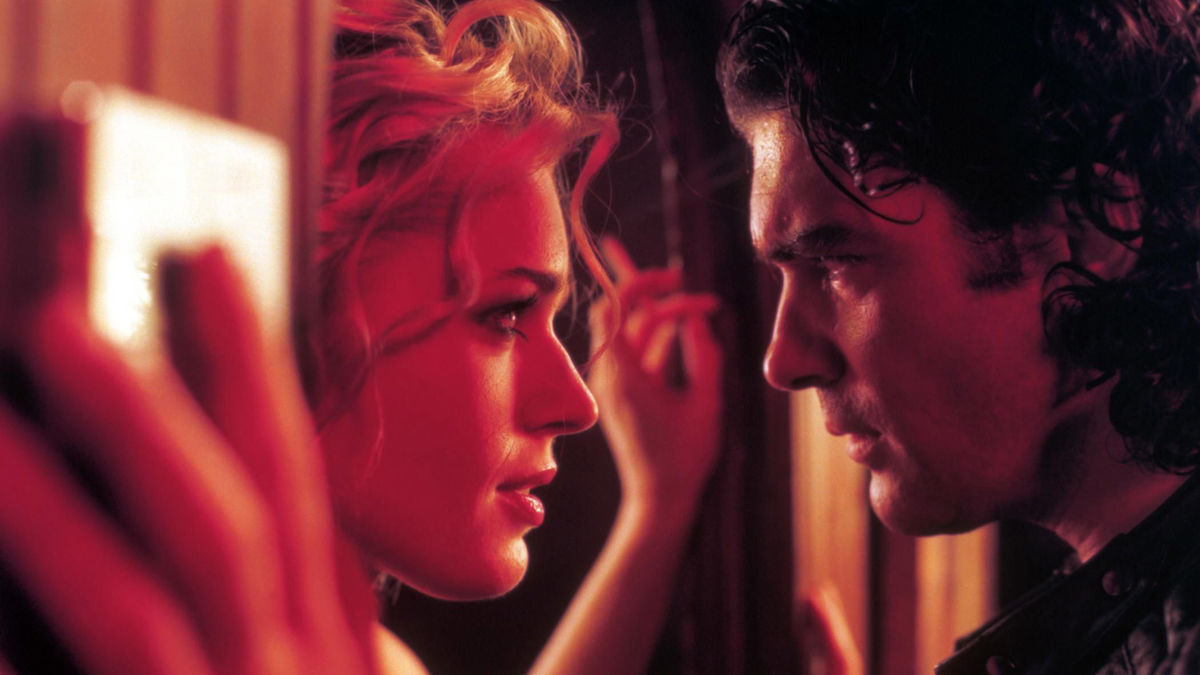 “This is utopia, bright and burning.” So narrates Hubert Sauper at the end of Epicentro, but the question at this point isn’t whether this utopia is real. It’s pretty well established that it isn’t—at least not entirely. It’s a matter of what’s fuelling it. Is it the brightness of the culture, or is it the burning it came from? “You are in the year 1898,” Sauper says at the beginning. The USS Maine has just fallen to an explosion in the Havana Harbor, and with that big bang comes more. The American flag is planted for the first time overseas. Yellow journalism and warfare unfold, and cinema, in its infancy, amplifies and distorts it all. The extent to which these all connect isn’t set in stone, but that’s okay. – Matt C. (full review)

Femme Fatale is a bubbling cocktail of Double Indemnity meets To Catch a Thief meets Vertigo meets The Double Life of Véronique that kicks you in the head real good right at the first sip and is so smooth going down that, by the time you notice you’re drunk, it’s too late to care, and there goes willowy Rebecca Romijn, a nesting doll shedding an archetype. The opening twenty minutes, a jewel theft set at the 1999 Cannes premiere of East/West, are what one might call “pure cinema” — which is to say they are series of hyperkinetic moments strung together through the rhythms of music and editing that could not be captured by any medium other than cinema, or any other filmmaker other than Brian De Palma. – Veronika F. (full review)

The Garden Left Behind (Flavio Alves)

What’s mostly a vérité document of lead character Tina’s (Carlie Guevara) trajectory towards chemically transitioning from male to female despite being an undocumented immigrant in an expensive city like New York, Flavio Alves’ The Garden Left Behind is also a rather potent expression of humanity’s collective dysphoria. Tina is at the center and her plight as a trans woman struggling to survive a world that sees her as “less than” is the main through-line, but Alves isn’t afraid to add to her story by shifting focus onto those who surround her—supportive and antagonistic figures alike. By doing this he’s able to play with our preconceptions of what these social dramas provide, using cinematic language to increase anxiety before ultimately choosing to diffuse or exacerbate our fears with action. – Jared M. (full review)

Teamwork. Orienteering. Foraging. Three tasks that shouldn’t be too difficult to complete when bolstered by your best friends on a hiking trip en route to earning the Duke of Edinburgh Award. It’s going to be a challenge, but most who seek it do so with open eyes because of what the accolade means on their university applications. They want to be their best, will follow the map to the letter, and meet their chaperone at the midway campsite and coastal finish line with smiles on their faces. But as years passed, fewer teens actually still cared about a stuffy award forcing them to put their phones in their pockets and traverse the Scottish Highlands. It became a punishment teachers used to escape their troublemakers for a couple of days. – Jared M. (full review)

In Ghost Tropic, a woman falls asleep on the last train home and misses her stop. Short on options and cab fare, she decides to walk. A mall security guard lets her use a cash machine after hours. A petrol station worker makes her a cup of tea. Some relatively less benevolent things happen too. The film is the latest work from Bas Devos, an emerging filmmaker from Belgium whose previous feature–a hypnotic reaction to the Brussels underground bombings in 2016 titled Hellhole–premiered at the Berlinale just three months before this one opened in the Directors’ Fortnight sidebar at Cannes. Devos remarkably shot and edited Tropic in that limited time period, a turnaround so swift it might have caught Takashi Miike off guard. It’s made even more impressive when one considers the distinct shift in mood. Even as far back as February, Hellhole–with all its narcoleptic public servants, stalking camerawork and anxious echoes of Haneke–looked like one of the bleakest films of the year. Tropic might be fishing in similar waters but it leaves one with something else; an outlook verging on hopeful. – Rory O. (full review)

Although the United States doesn’t have an official language, the Lingua Franca of Isabel Sandoval’s third feature-length refers to the English adopted by immigrants who arrive in America and need it to make their lives easier. However, one could argue it could also refer to the silences which often express much more of the characters’ heartaches and dreams than the English they use to communicate with each other in society. – Jose S. (full review)

Eponymous Matthias (Gabriel D’Almeida Freitas) and Maxime (played by Dolan himself, serving in a writer-director-actor triple duty he hadn’t pulled since Tom at the Farm) have been best friends since childhood, but brace for an encroaching farewell. Maxime is a few months’ away from a semi-permanent move to Melbourne, and a friends’ weekend retreat in an idyllic Quebecois lakeside chalet gives the two a chance to rehearse the goodbyes. It’s a rupture that feels nothing short of a breakup. Trapped inside a heteronormative world that forbids them from ever calling themselves such, Matthias and Maxime nonetheless do act and look like a couple – and their friendship veers into bromance long before the pair agrees to star in a student film directed by retreat host Erika (Camille Felton) and make out before the camera (a scene which Dolan curiously cuts). – Leonardo G. (full review)

The warm, gentle, and insightful films of Stephen Cone are the pre-eminent example in low-budget independent filmmaking of how to create lived-in worlds with fully-fledged, empathetic characters. The Chicago-based filmmaker has now received the spotlight on The Criterion Channel with his three greatest works thus far, The Wise Kids (2011), Henry Gamble’s Birthday Party (2015), and Princess Cyd (2017), along with a new interview. – Jordan R.

The Host
Roads Not Taken

Agave: Spirit of a Nation
Anbessa
Indianara
The Reports on Sarah and Saleem
The Hedonists

Driven to Abstraction (review)
Nomad: In the Footsteps of Bruce Chatwin