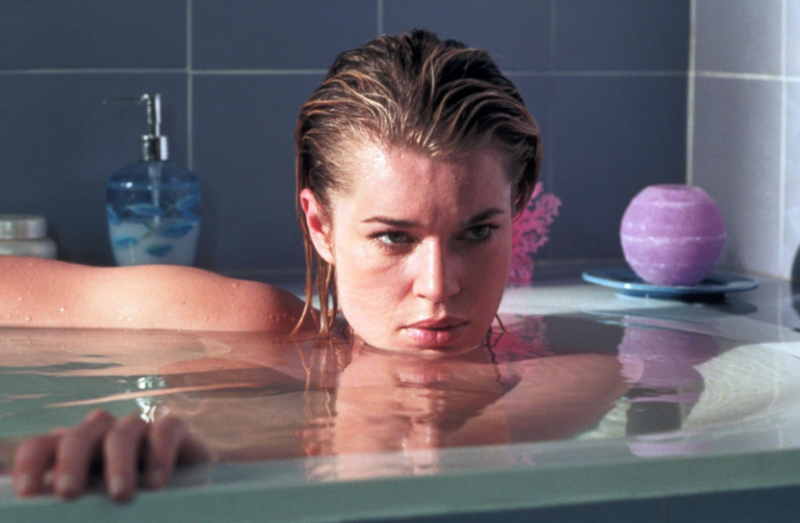 Femme Fatale is a bubbling cocktail of Double Indemnity meets To Catch a Thief meets Vertigo meets The Double Life of Véronique that kicks you in the head real good right at the first sip and is so smooth going down that, by the time you notice you’re drunk, it’s too late to care, and there goes willowy Rebecca Romijn, a nesting doll shedding an archetype. The opening twenty minutes, a jewel theft set at the 1999 Cannes premiere of East/West, are what one might call “pure cinema” — which is to say they are series of hyperkinetic moments strung together through the rhythms of music and editing that could not be captured by any medium other than cinema, or any other filmmaker other than Brian De Palma.

Romijn plays Laure, a master thief who steals a beautiful piece of jewelry (which serves as an elaborate snake-like top, with diamonds covering the nipples) from Veronica (Rie Rasmussen) during a steamy bathroom scene while everyone at Cannes — save some frazzled body / jewel guards who are growing increasingly agitated by the length of Veronica’s powder room visit — are paying attention to the premiere of East/West. Laure then betrays her fellow thieves and has to go into hiding, lest those she double-crossed decide to take revenge — which, of course, they do. Luckily for her, it turns out Laure has a suicidal brunette doppelgänger, Lily, whose identity she assumes after Lily takes her own life. Laure-as-Lily goes to the United States and has a meet-cute on the plane with Watts (Peter Coyote), who eventually becomes the American ambassador to France, bringing Lily back into the country she last inhabited as Laure.

Laure’s return to France is Nicolas’ (Antonio Banderas) cue to enter the story as a photographer. Nicolas has been contracted to take a photo of the camera-shy ambassador’s wife and whose happenstance involvement in the capturing of an image — much like John Travolta’s just happening to have been at the wrong place at the right time to capture a sound in Blow Out — sucks him into a rather unsavory mess and Laure/Lily’s gradual transmutation of identity. The photographic image is extremely potent in Femme Fatale as sound is likewise in Blow Out; De Palma loves to imbue cinema’s essential elements with striking gravitas.

To give away more of the plot would be cruel and take away from the wicked, velvety pleasure of observing this film’s sinewy twists. To step away from the specifics of the film itself, it is worth making note of the context of its existence within De Palma’s ’00s career. De Palma made four films in that decade: Mission to Mars (2000), Femme Fatale (2002), The Black Dahlia (2006) and Redacted (2007). As disparate as these works are, the gradual evolution of the worldview expressed from one to the other makes for a stingingly accurate portrait of what it was like to be living in the United States in the early 21st century. From the curiosity and hopefulness of Mission to Mars to the growing cynicism of Femme Fatale, whose last few minutes save the film from dissolving in a pool of acid it has spent nearly 2 hours neatly collecting. And then there’s the sordid messy madness of The Black Dahila, which gives way to the ultimate human abasement and malignancy shown in Redacted, which is so dire in its bleakness it’s a wonder De Palma didn’t just turn his back on the world after making it.