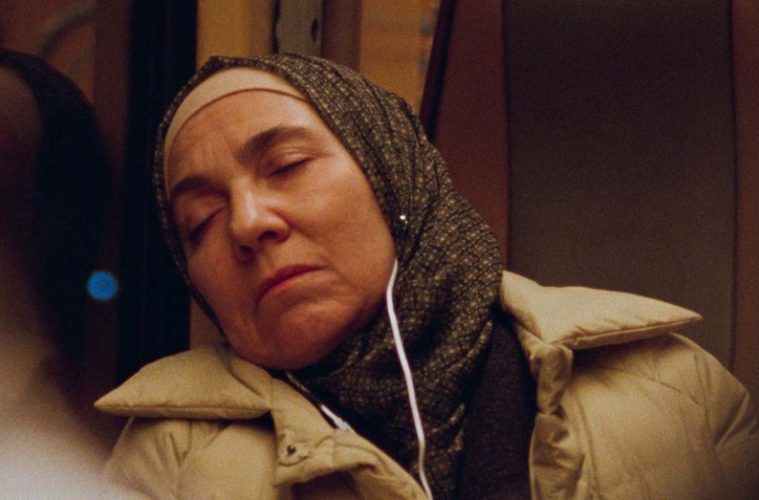 In Ghost Tropic, a woman falls asleep on the last train home and misses her stop. Short on options and cab fare, she decides to walk. A mall security guard lets her use a cash machine after hours. A petrol station worker makes her a cup of tea. Some relatively less benevolent things happen too.

The film is the latest work from Bas Devos, an emerging filmmaker from Belgium whose previous feature–a hypnotic reaction to the Brussels underground bombings in 2016 titled Hellhole–premiered at the Berlinale just three months before this one opened in the Directors’ Fortnight sidebar at Cannes. Devos remarkably shot and edited Tropic in that limited time period, a turnaround so swift it might have caught Takashi Miike off guard. It’s made even more impressive when one considers the distinct shift in mood. Even as far back as February, Hellhole–with all its narcoleptic public servants, stalking camerawork and anxious echoes of Haneke–looked like one of the bleakest films of the year. Tropic might be fishing in similar waters but it leaves one with something else; an outlook verging on hopeful.

The director opens–and, indeed, will close–his film on a static time-lapse that shows the living room of a small and noticeably everyday apartment, as day slowly slips into dusk. Saadia Bentaïeb helms the proceedings as a cleaning lady named Khadija. This room, as we soon learn, is the place she will spend the next hour and a half of screen time attempting to get back to. It is impossible to ignore the ripples of two of Devos’ most esteemed countrymen here, Jean-Pierre and Luc Dardenne, but there is a touch of surrealism to Devos’ work that would be frankly alien to the brothers’ paired-down social-realist oeuvre. Khadija misses her stop during another long, ever-watching take (increasingly a Devos signature) and as the eyes grow heavy the camera pulls back and we begin to hear a chorus of exotic bird sounds. Devos will mysteriously but effectively return to this escapist ideal throughout, leaving little explained.

Khadija’s odyssey is sparse; perhaps more immersive thanks to its quiet lack of drama than any grand dramatic incidents. The sequence with the ATM is the first in a series of small but moving acts of everyday kindness that spring from situations we are somewhat conditioned as audiences to feel uneasy about. (A woman walks home alone at night, indeed.) Devos counterpoints these with only occasional moments of discomfort for Khadija–who is, significantly, Muslim, and wearing a headscarf. At one point, as she peeks into the window of a house she once worked in, she draws the attention of a concerned neighbour. It’s brief and relatively benign, but the casual racism is there for all to see.

The ever-recurring cinematic trope of working class and lower income people as quiet, dignified, even angelic sorts–something Alfonso Cuarón drew criticism for with Roma–is not entirely avoided here, however Khadija packs enough bite, if not bark. Regardless, the quiet power of Saadia Bentaïeb’s performance is the key to Devos’ third feature. The actress is perhaps better known in theatre circles, although keen-eyed viewers might recognize her from bit parts in BPM, Based on a True Story, and Bertrand Bornello’s latest film Zombi Child. This is her first lead role and Ghost Tropic, for most intents and purposes, is hers alone. Even still, great credit to Devos; who is almost the only director who can boast not one but two of 2019’s most impressive features.