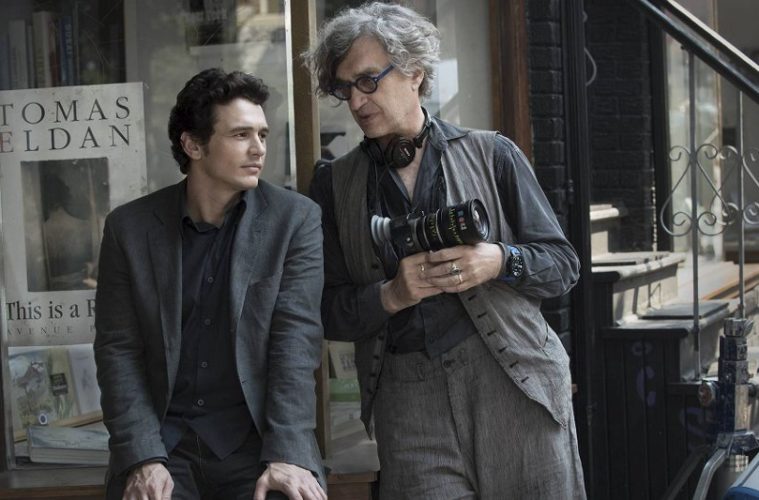 As we close out our first full week of 2014, today brings a batch of images from a handful of upcoming features. First up is easily our most-anticipated of the batch, Wim Wenders‘ 3D drama, Every Thing Will Be Fine, which stars James Franco, Charlotte Gainsbourg and Rachel McAdams. The drama follows Tomas, a man whose accidental killing of a young boy serves as the basis for a successful, acclaimed writing career. Over more than a decade, however, guilt still hangs over the man’s head, a feeling that soon culminates with communication from the victim’s mother (Gainsbourg) and brother (Robert Naylor). Check out the first official photo above, featuring our director and Franco on set.

Below is a new look (although it’s really just a screenshot of the trailer) at Channing Tatum as a half-albino, half-wolf in Wachowskis‘ sci-fi epic Jupiter Ascending, which arrives in July. [EW] Next is the first look at Thomas McCarthy‘s Win Win follow-up The Cobbler, which gives Adam Sandler his most promising role in some time. With a magic realist touch, it follows our lead as a man who is able to literally step into the shoes of his customers. There’s no release date yet, but expect it to arrive before the end of the year. [EW] Second to last we have the first image from Melissa McCarthy‘s next comedy, Tammy. Directed by her husband (and Bridesmaids co-star) Ben Falcone, the film follows McCarthy as an employee at a fast food restaurant who finds her husband cheating on her. She then decides to embark on a road trip with her grandmother (Susan Sarandon). Also starring Allison Janney, Kathy Bates, Dan Aykroyd, and Toni Collette, the film arrives on July 2nd. [USA Today] Lastly, we have the first image from Seth MacFarlane‘s Ted follow-up, the western comedy A Million Ways to Die In the West. As one can see below, MacFarlane falls in love with Charlize Theron‘s character, but has to battle her husband, played by Liam Neeson. Also starring Amanda Seyfried, Giovanni Ribisi, Sarah Silverman, and Neil Patrick Harris, the film hits theaters on May 30th.