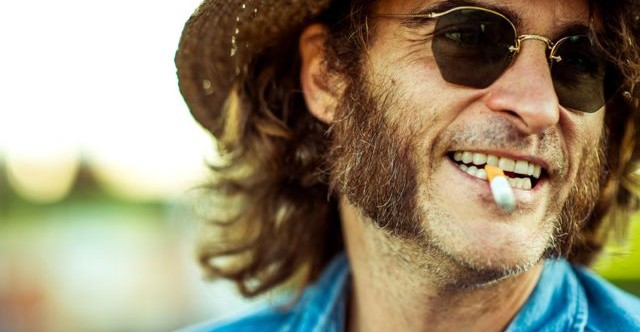 As we look towards the fall, one film that’s sure to be at the top of the conversation is Paul Thomas Anderson‘s Thomas Pynchon adaptation Inherent Vice. Warner Bros. still has yet to deliver any footage from the project, but after a small peek, we’ve got another official look at the film, as well as some more details.

“Wild movie. You know, it’s the first [Thomas] Pynchon film adaptation, and it really catches his tone,” New York Film Festival director and Selection Committee Chair Kent Jones says, discussing Inherent Vice. “It really catches the antic nature of him: the crazy names of characters, the nutty behavior, and then also the emotional undertone. It has the flavor of Pynchon. It has this Big Lebowski element to one side of it, but the emotional undertone, the desperation, the paranoia, and the yearning in the film… [Paul Thomas Anderson’s] an absolutely amazing filmmaker and it’s incredible to see him responding to someone else’s creation and then building his own creation out of it. He sort of did that with There Will Be Blood, but not really. It’s his own movie, inspired by the novel Oil!”

Along with sharing the photo below, featuring star Joaquin Phoenix, Jones went on to discuss his personal reaction to the film, saying, “I was born in 1960, but I certainly remember 1971 very well and I gotta say, from the minute the movie started to the minute it ended, I was back—way back—to the point where I was thinking “Gee, my son was born in the ’90s.” So it’s a different kind of relationship that he would have. It’s an amazing piece of work, and at this point Joaquin Phoenix and Paul have something so rare between them as an actor and director, and Sam Waterston’s daughter, Katherine, is in it, and she’s riveting every minute she’s on screen. It’s quite a film.” It sounds like we’re in for something truly special, and as we await the first trailer, one can see the new image below. Update: Along with the above non-watermarked image, see (and click) a high-resolution version with a NYFF stamp below, thanks to Film Society. Cigs & Red Vines has also highlighted a new photo from the latest issue of Empire, featuring the first look at Benicio Del Toro.