Locarno Review: Vitalina Varela is One of Pedro Costa’s Most Stunning Films 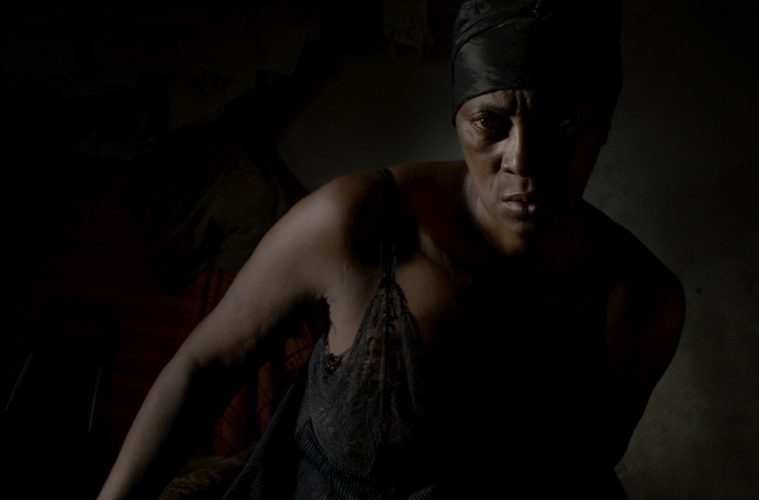 A dark back-alley drowned in shadow; towering concrete walls on either side; on the top right a row of headstones overlook; the glimmer of a walking stick emerges in the distance, and then a funeral procession. 15 minutes later a women disembarks from an airplane and is greeted not by family but by the airport’s cleaning staff. “There is nothing for you in Portugal, Vitalina,” they say.

Welcome—or perhaps welcome back—to the world of Pedro Costa, the austere Portuguese director behind Colossal Youth (2006), In Vanda’s Room (2000), and other haunting works with which to grapple. His latest is titled Vitalina Varela and picks up where last year’s Horse Money left off, focusing on the eponymous character who first appeared as a supporting player in Money while also persisting in Costa’s unmistakable style: slow static shots set up like minimalist plays; stark white lighting from far above, as if the characters had found themselves lost in a cave; much of the same cast; and, of course, the familiar back alleys of Lisbon’s Fontainhas neighborhood, the director’s signature hunting ground.

Varela is the story of a woman who travels from Cape Verde to Lisbon to see the husband who left her there 25 years previously only to discover upon arrival that he’s been dead for three days. The character is expertly played by Varela herself (a classic Costa move), who gives an astonishing, restrained performance as a woman juggling her frustrations, regrets, and grief. The film charts her period of mourning as she wanders like a pariah amongst her husband’s old neighbors, uncovering his secrets, and turning to faith only to find that God has left the building.

That temporary loss, or dilution, of faith is key to Costa’s vision and the director bluntly mocks it at first–using wrought iron window grates to form halos on not one but two background tv screens and, later on, with a shot of a crucifix and a tv antenna side by side–squint the eyes and they are almost indistinguishable. Varela visits a squalid local community chapel where the priest (played by the statuesque Ventura, a Costa regular) tells her “No mass today, nobody comes here anymore.” The director confounds this sense of Edenic tragedy, of Paradise Lost, by having Varela speak in recurring soliloquies about Cape Verde, bitterly remembering the house that she and her husband had planned to build.

Take it from a recently converted: those unfamiliar with Costa’s work should not be deterred by the dourness of that setup. The austere nature of his films can be demanding and may even seem like works of exoticism at first, but that severity can only disguise the filmmaker’s straight-faced earnestness for so long. Indeed, Costa has been compared to Beckett but there is as much of recent Kaurismäki going on here–not in terms of humor, of course, but in the strange and deeply felt way both directors combine heightened, romantic cinematic techniques with vitally current material. Costa’s style is at once aesthetically unique and thematically contemporary while also–despite his use of digital imagery–clearly the work of a great cinematic classicist. Much of the tremendous power and awe of Vitalina Varela comes from that counterpoint and the seriousness of the performances. It is a staggering picture, amongst the best of the year.

Vitalina Varela premiered at the Locarno Film Festival and will be released on February 21, 2020.