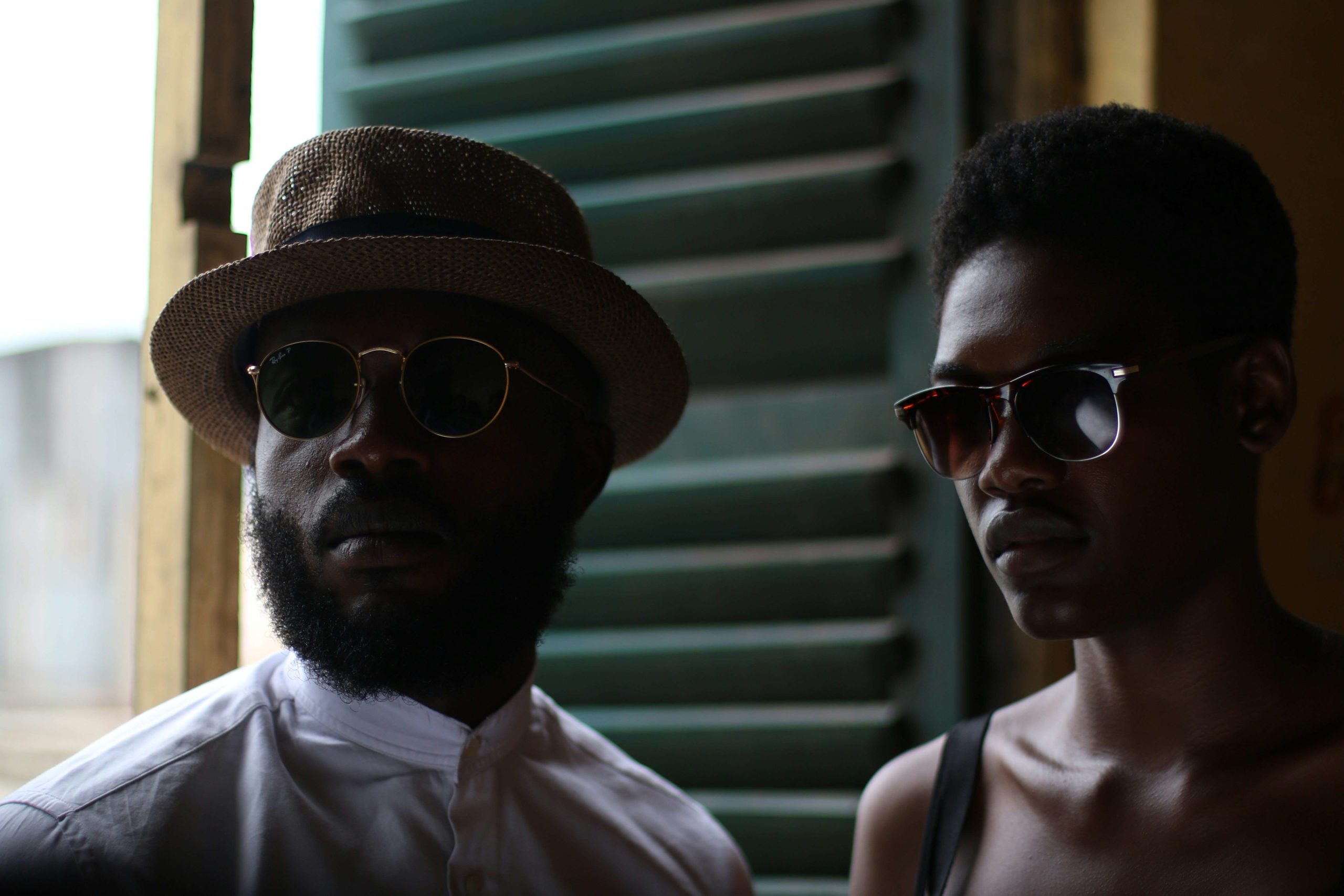 Impeccably dressed, eyes shielded by sunglasses and arms dangling from the windows of their Nissan pickup, Ama (Briggitte Appiah) and Sadiq (David Klu) breeze through Ghana like twenty-first century cousins of Anta and Mory, the Bonnie and Clyde couple in Djibril Diop Mambéty’s Touki Bouki. They’re the two young people at the heart of Kofi Ofosu-Yeboah’s Public Toilet Africa, a picaresque, irreverent journey where a model seeks revenge for her childhood traumas. Or at least that’s one of the many films tucked inside writer-director Ofosu-Yeboah’s feature debut. Public Toilet Africa is several things—a revenge tale, a road trip, a tale of a city and a remote village; a courtroom drama—and if the ride isn’t always smooth, the end result is a rebellious and oneiric portrait of a country wrestling with the specters of colonialism.

Anchoring this protean creature is Ofosu-Yeboah’s knack for satire. Every institution, every authority figure in the film is mercilessly lampooned, in a manner that brings to mind the films of Ousmane Sembène (Xala, to name one). The first two oddballs we meet, punch-drunk alcoholics Atta and Kwaku, are in fact former cops turned thieves; the verdict of a trial Ama and Sadiq attend halfway through their trip is overruled once the couple bribes the judge; not to mention “Lovely,” the career politician we’re introduced to as the film opens, who keeps resurfacing only to bray that Accra deserves to defecate in sun-powered public restrooms (“vote for me and every corner will have a solar toilet”). And then of course there’s the white man, an institution unto himself, here embodied by three shady figures: the crippled art collector for whom Ama worked when she was still a child; an investor looking to build a resort on an uncontaminated beach; and a long-haired photographer Ama posed for multiple times, but never paid her.

It’s him the young woman is looking for. Having recruited Sadiq, the two tag-team to nick the photographer’s kit, and then bolt from Accra to the country’s outback. Thirty minutes in and Public Toilet Africa thus morphs into a road movie—one that’s entirely sui generis. Straightforward as the plot may seem on paper, the film as experienced unspools arrhythmically. It’s an odyssey that hangs in its own, dreamlike space, springing balletically from a series of surreal encounters with surreal strangers. It’s telling that the trip should kick off, after a fade to black, with a shot of Ama and Sadiq waking up somewhere along the road, the car parked by a village neither seems to recognize. That somnambulist confusion lingers everywhere in Public Toilet Africa, and only grows stronger in the film’s second half. Is the journey Ama and Sadiq embark on a dream? A vision? Ofosu-Yeboah leaves things deliberately opaque, but it’s interesting he should turn his protagonists into spectators of their own. Much of what Ama and Sadiq get up to in the film—at least until they realize they’re being chased by a hitman the photographer’s sent after them—is just plain witnessing. They watch the seemingly endless pantheon of eccentrics Ofosu-Yeboah summons along the way. Listen quietly to their stories. Help those who’ve been wronged, then drive away.

Justice traverses Public Toilet Africa as the film’s chief preoccupation and narrative catalyst. After all, Ama’s only returned to Accra to settle scores with the people who, we’re told, stole her childhood. “They took everything away from me,” she hisses to Sadiq on their first rendezvous, “I want to take something from them too.” But all the girl manages to take back in the film is the bag with the photographer’s equipment—cameras and negatives. Perhaps Ofosu-Yeboah wants us to regard this as a clue to the kind of liberation Public Toilet Africa is after. By pocketing pics and lenses, isn’t the young model effectively stealing the stuff that helped commodify and sell her body? It’s a pertinent reading, but if this is the sort of re-appropriation the film’s concerned with, Ofosu-Yeboah doesn’t really mine it as fulsomely; there are times when Ama’s struggle loses focus, her rage suddenly less vivid, her motives more vapid.

Stitched together as a mosaic of overlapping stories, it’s no surprise that Public Toilet Africa should feel uneven. Not all detours and forking storylines carry the same electricity, and for every riveting passage the film conjures there are others where things stall (for one thing, delightful as the banter may be between the ever-plastered Atta and Kwaku, there are only so many shit- and fart-related jokes one can take before the routine gets tiring). Ofosu-Yeboah’s decision to rely on an omniscient, invisible narrator pays dividends when the intermittent voiceover helps unearth some of the dirt characters are trying to hide (it’s the voiceover that tells us about Lovely’s dodgy past, about the drunks’ fall from grace, and what Ama may or may not have done to the art collector in return for all she suffered as his maid). But the few times the film’s scope grows larger, moving away from individual characters to focus instead on the seismic changes the country is undergoing, the musings we’re treated to are far less incisive and revelatory. “Chinese contractors continue to import labor, while local industry only hires skilled labor from the big city” is the explanation we’re offered for Ghana’s rampant urbanization, in stretches that seem to echo from an altogether different film.

Then again, I suspect criticizing Public Toilet Africa for its inability to make all its tesserae coalesce is to play into the director’s hands. For a film that can often give the impression of being yanked out of a dream, it’s only fitting that Ofosu-Yeboah should resist the urge to streamline all its startling images and celebrate instead the incongruous kaleidoscope they make up. Radiating from Ama and Sadiq’s flight is an oneiric energy that connects Public Toilet Africa to Mambéty’s 1973 classic. In Touki Bouki, the two lovers on the run looked for Paris as their Xanadu; here, Ama and Sadiq don’t have a destination so much as an irresistible itch to move forward, borne back ceaselessly into a country perched between tradition and modernity, between city and village, home and abroad.