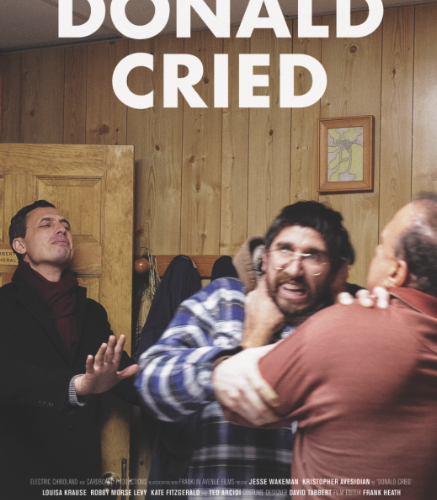 Donald Cried opens in medias res on Peter (Jesse Wakeman), in a cab ride through a snowy suburb, realizing that he lost his wallet, and from there gives successive details of him present due to the death of his grandmother and this, our setting, being his childhood home in small-town Rhode Island — a good omen for this comedy being in the milieu of the Farrelly brothers.

A Wall Street type, he calls a Manhattan connection who, unfortunately, is unwilling to wire him the $100 necessary to get through the day, forcing him to turn to high school friend Donald (Kris Avedisian, also the film’s director) for help after by chance encountering him in the driveway. The first instance of this film’s ample physical comedy comes when Donald, in his bathrobe, climbs over a mound of snow to embrace Peter; you see he’s been waiting twenty years for this moment.

Initially seeming like a heavily accented teddy bear, Donald’s affection towards Peter soon turns towards a discomfort of course steeped in a white collar-blue collar binary. Upon taking Peter to his childhood (as well as adult) bedroom — hilariously containing, amongst metal band merchandise, a poster for John Frankenheimer’s long forgotten killer-grizzly flick Prophecy — we realize that Donald belongs to the word of Joel Potrykus’ similarly scaled Buzzard with its working-class, east coast man children. But this is also the location of Donald’s first big scene, in which he goes off on a long tangent about how he imagined Peter as a long-haired, motorcycle-riding bounty hunter — clearly the Apatow school of prolonged improvisation session taking effect.

Though perhaps, in the higher-budgeted studio comedy, you could imagine this starring Seth Rogen and James Franco, where it might’ve gone to greater lengths to categorize Peter’s standing beyond his bluetooth headset. Yet while Avedisian seems to be the dominant performer, Wakeman’s face, a study in restrained discomfort, certainly situates the film as much in the category of cringe comedy as it does the man-child subgenre: every one of Donald’s reminders of Peter’s painful past as a metalhead and high school loser test both his and the audience’s patience.

Yet this is not entirely a comedy, for violence casually hangs in the air. Donald willfully takes abuse throughout, be it from his boss (later to be revealed his step-father), or an impromptu rough-and-tumble football game with a drug dealer in a snowy park where the camera captures each uncomfortable tumble to the ground between him and Peter. Avedisian, as a director, certainly leaves the film to him and his fellow performers to dominate, but not so much in the sense of ostentatious close-ups of heartfelt monologues — rather by capturing the uncomfortable physical confrontations between everybody.

Donald Cried certainly doesn’t seek to elevate itself too much beyond the indie fray, yet it still finds pleasures in compactness, believably stretching the course of a lazy Saturday in January over the course of 85 minutes. It still manages to meet the narrative expectation of Peter eventually blowing up at Donald and then them reconciling before he he heads back for New York, and it’s luckily not as maudlin as the bromance can get — not trying to impart the sense that both characters “learned” from the events so much as that they just got through it. Thankfully, no more and no less.

Donald Cried screened at the 2016 Locarno Film Festival and opens on March 3.