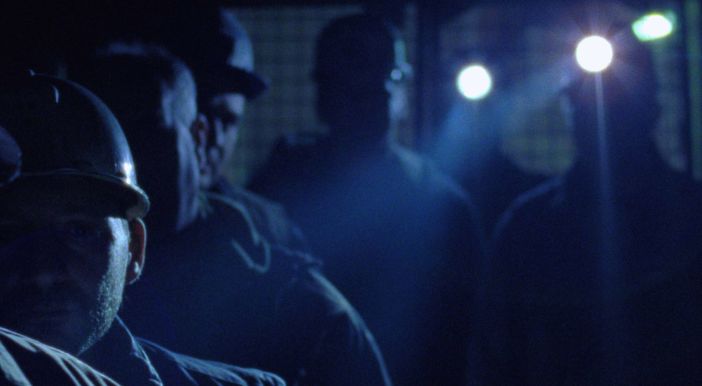 There is a symbol at the beginning, middle and end of Good Luck. It is a simple geometric circle with a horizontal line evenly separating top from bottom. Does it represent above ground and below; Northern and Southern Hemispheres; Ying and Yang; daylight and darkness? It could be any one of these or all of them at once. Shot in 2016, this visually stunning, obliquely political, and rather extensive ode to the hardest of graft is built to offer the viewer the otherworldly experience of first going down the shaft of a state-run copper mine in Serbia and, in the second half, that of illegally digging for gold under the Surinamese sun.

It is the latest work of documentary filmmaker Ben Russell and — as with much of the Massachusetts native’s work — is a meditative beast at the best of times. Russell shoots entirely with 16mm film stock, which must have been a nightmare to carry on those endless handheld takes — I counted no more than four cuts in the opening thirty minutes — but the resulting imagery is no less beautiful for it. Indeed, Russell works wonders, allowing us to feel like we’re really there: going down that endless lift; joining a procession down a tunnel or to the nearest well; or knee deep in mud and sifting the water.

Good Luck opens on one such procession, with Russell pulling his camera back from the blue skies and yellow rock of the copper mine to reveal a marching band (a musical interlude Russell manages to trump on not one but two occasions, both concerning gold). When they finish playing one musician walks towards the camera, like a chorus member in a Greek tragedy, to reveal he used to live here. This world is now strange and barren, no place for humans perhaps. The mine sits in the distance behind them: enormous, static, and disinterested. It could be read as a proof of concept for the entire film, laid out in the second shot.

We’re soon below ground in a world Spielberg might have set-designed, like the place Truffaut sets up his synths at the end of Close Encounters, all animated construction (destruction?) machinery and helmet torchlights producing cobalt blue flares. The Suriname imagery is in stark contrast, composed of red and orange, mud and sand. It’s consistently lush and yet the mind does wander, but perhaps that’s okay. The film — which in its theatrical version runs for 143 minutes — will be exhibited in a shorter multi-screen format at the once-in-a-decade Documenta art festival in Kassel this year. Could it be more at home there than on the big screen? I would still wager not, but take from that what you will.

A pitfall — for want of a better word — of this kind of travelogue filmmaking (Michael Glawogger’s excellent posthumously released Untitled comes to mind) can be a directorial urge to stand back, disengage, and allow the subject matter to remain entirely alien. It is an undeniably effective tool, but by accentuating the foreignness of what’s on screen, it’s also a somewhat dangerous one.

Russell is no stranger to Suriname — he served in the Peace Corps there before shooting his first feature — and it shows. This new work is still trippy and no less experimental than the Glawogger but Russell also takes the time to let us in, intercutting the mesmeric footage with scenes of camaraderie in communal areas (playing football, talking about politics and the future, being simply lighthearted) and head-on black and white shots of the minors themselves.

It might be a question of warmth, a commodity that can get lost in such places (or indeed films about such places) all too easily at times; warmth shared between the men themselves but also the warmth produced as a result of the filmmaker’s powerful empathy towards them.