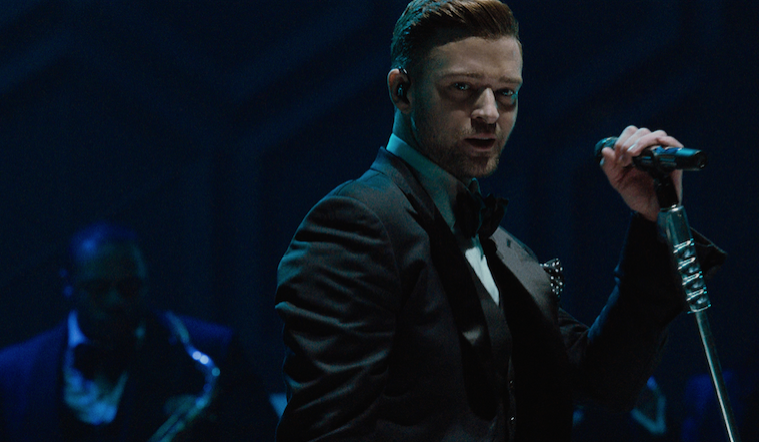 After he returned to the world of music for a narrative drama with last year’s (overlooked) Ricki and the Flash, director Jonathan Demme is back on the stage in Stop Making Sense mode with Justin Timberlake + The Tennessee Kids. Capturing the pop star’s The 20/20 Experience tour during their Las Vegas stop, Netflix picked up the film for a release in just a few weeks and now the full trailer has arrived, which previews what looks to be as an immersive experience as one could expect from the director.

We said in our review, “Timberlake still does what he does, and the show seems easily amongst the upper echelon of touring pop-stars, so it’s not like the experience doesn’t go down easy, even if it feels like somewhat of a missed opportunity to genuinely enter the mind of this sort of stardom. (Not that we necessarily needed raw footage of JT backstage lamenting the failure of Runner Runner.) The end credits, depicting laborers assembling the stage, is another notch on the “teamwork” belt that still manages to have Timberlake pop in to crack a joke and look like the nicest, coolest guy in the world. Perhaps the stakes are too low to really criticize a project that generally works well enough on its own terms.”

Justin Timberlake + The Tennessee Kids is Directed by Academy Award® winner Jonathan Demme (The Silence of the Lambs, Neil Young: Heart of Gold) and produced by Emmy Award winner Gary Goetzman (Band of Brothers, John Adams). The Netflix Original Film showcases the entertainer’s final date of his 20/20 Experience World Tour at the MGM Grand Garden Arena in Las Vegas. Surrounded by the 25 band members of The Tennessee Kids and featuring show-stopping performances from one of the highest-grossing tours of the decade, the film is a culmination of the singer’s 134 shows and 2 years on the road.