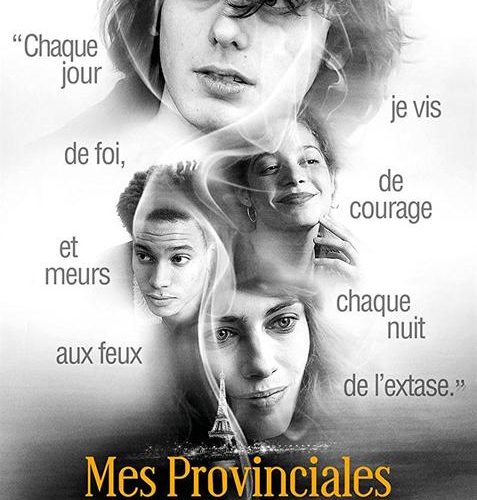 Halfway through writer-director Jean-Paul Civeyrac’s cinephile coming-of-age story A Paris Education, a girl confronts a budding filmmaker: “You seem out of touch with reality… like you live an armchair life.” It is not the first time aspiring cineastes in Civeyrac’s IndieLisboa entry get scolded for being self-centered navel-gazers, nor does the slap feel entirely undeserved. A mélange between Garrel’s Regular Lovers (with which it shares a gorgeous black and white cinematography, courtesy of DP Pierre-Hubert Martin) and Mia Hansen-Løve’s Eden (of which it echoes the same affection for deranged, self-destructive loners), A Paris Education follows the solipsistic journeys of a few film students whose only real concern in life seem to be whether or not they’ll ever join the ranks of the auteurs they binge-watch before reality catches up with their dreams.

Long-haired and clean-shaven Etienne (Andranic Manet) is the protagonist. A native of Lyon, he leaves his parents and girlfriend for a place at a Parisian film school and a room in a Bohemian apartment populated by other idealistic and stranded twenty-somethings. Like all the characters he befriends during his first months in the capital, the youngster comes from the province, and for a while he spends time wandering around the metropolis with the searching and slack-jawed look of a perpetual tourist. The city-province is a dichotomy A Paris Education promises to unpack from the start (the original French title, Mes Provinciales, serves as a clear allusion) and if you’re anything like me – a small town boy who only got to experience big-city life after years of suburban limbo – something of the alienation Etienne experiences in the new urban turf and the clumsiness with which his parents walk around the capital during their rare visits will ring awkwardly true.

But the distance between countryside and metropolis shrinks too quickly for Civeyrac to tease it out to the extent it deserves. Engulfed in the capital, Etienne quickly embraces a distinctly Parisian presumptuousness and befriends a couple of provincial budding cineastes: the optimistic and ever-cheerful Jean-Noël (Gonzague Van Bervesseles) and the manipulative, charming Mathias (Corentin Fila). Together, the trio dream of revolutionizing cinema, scoff at “the modern mediocrity” produced by other classmates, panic at the prospect of selling out without ever having actually shot anything, and laugh at people’s appraisal of present-day icons. (“Who is David Fincher compared to Ford or Vigo?”)  In the apt words of the few girls they try to seduce with arthouse cinema quotes, they are so pretentious they “might as well be from Paris.”

So what exactly happens in A Paris Education? Admittedly, very little. Civeyrac pieces together Etienne’s Parisian exploits as an episodic patchwork: the young man settles in the city, attends some classes, tries to shoot his first short, fails, and tries again. All the while, people keep entering and leaving his life as flickering and disposable extras, be they generous friends he patronizingly dismisses as “people history will not remember” or girls he flirts and casually sleeps with. But while A Paris Education is on its surface an unmistakably narcissistic Portrait of an Artist as a Young Man, it is also a subtle critique of the toxic self-importance that makes that image possible.

Civeyrac’s latest is a movie about perspective, and it resolutely adheres to Etienne’s own. If other characters feel like temporary ornaments, it is because, in the young man’s universe, that is precisely what they are. This is the film’s premise: Etienne’s journey stays true to it, but Civeyrac does not spare him from irony. There are moments when people scoff at the young man’s egotism (“you never even bothered asking me what I do,” a flat-mate remarks weeks after the two have lived together) or question his self-loathing (“you put yourself down too much,” another girl observes, “but it’s like you’re playing it a little”), and others react when Civeyrac mocks a work-allergic generation with the same sarcasm of a younger Nanni Moretti.

But even when the critique feels most explicit, the camera retains the nostalgic and endearing gaze of a movie lover resuscitating a ’60s arthouse-bubble. Watching Etienne and his mates pursue their dreams with fiery passion in the face of uncertainties and chronic loneliness, memory jolts back to the great players in the French masterworks these youngsters quote from. Whether or not the thought of following a self-absorbed wannabe filmmaker for 136 minutes has you buzzing with excitement, A Paris Education is a wonderfully anachronistic homage to a timeless, New Wave-style world filled with cinephiles, lovers, and great films. It’s a universe as self-centered as it is endlessly fascinating.

A Paris Education screened at IndieLisboa and opens on August 31.