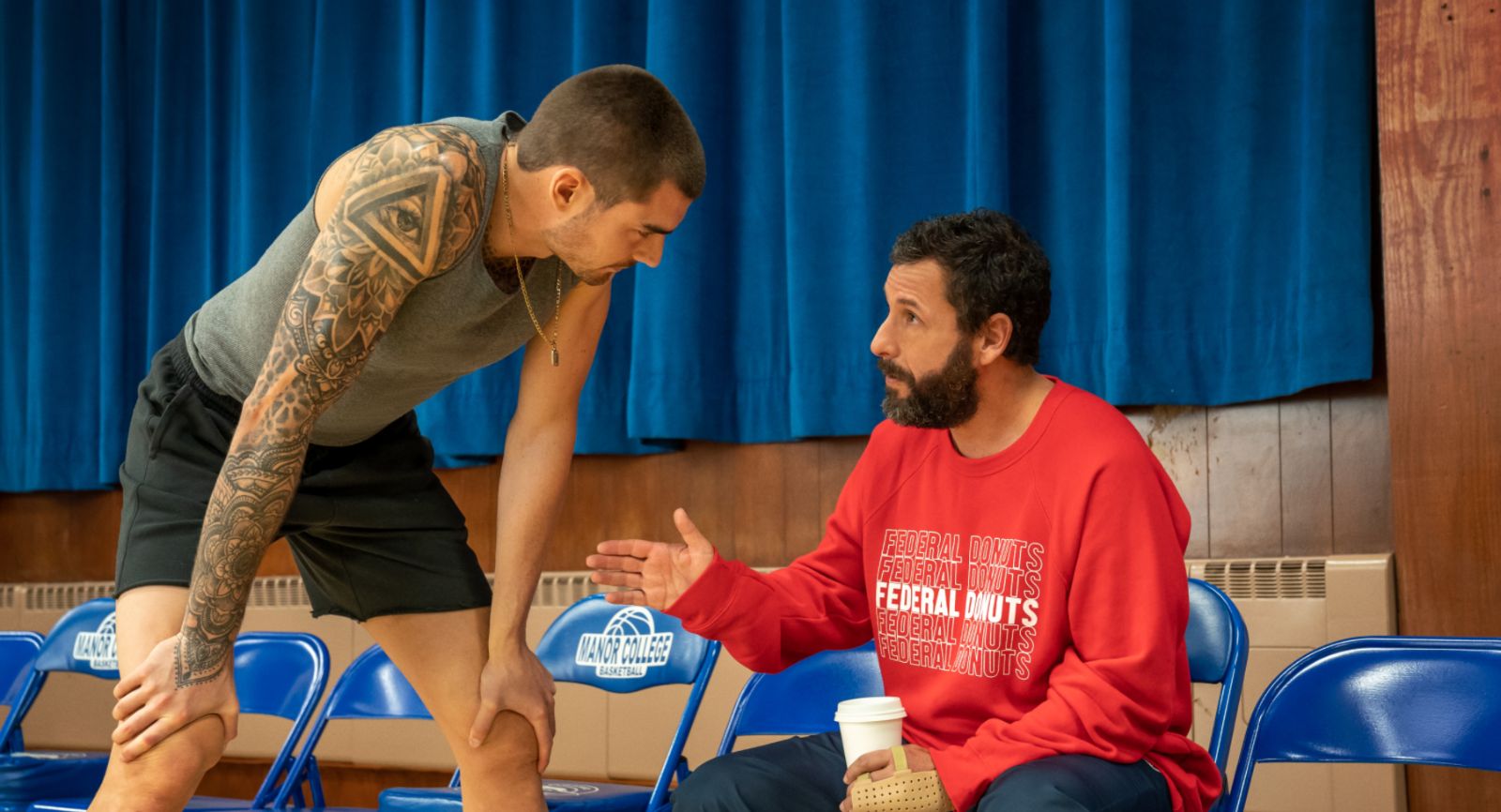 One, perhaps foolishly, comes to a new Adam Sandler picture in the post-Uncut Gems phase of his career with at least some expectations. And one would think his new film Hustle would be the star’s idea of a passion project, being a courtside fixture at NBA games and all. What we get is a rather low-stakes, thoroughly generic not-quite-drama, not-quite-comedy that likely would’ve been a middling studio picture à la Ivan Reitman’s Draft Day ten-to-fifteen years ago, but is seemingly presented as the first prestige Happy Madison production. Also curiously anchored by somewhat of a low-wattage performance from the star—more akin to the borderline sleepwalking in his other Netflix originals than the manic, committed turn that got him a lot of attention again in 2019—the enterprise is, a couple of energetic basketball scenes aside, strangely undercooked on the whole.

Sandler plays Stanley Sugarman, a former mid-tier college basketball player-turned-scout for the Philadelphia 76ers who spends most of his time overseas—as with Matt Damon in last year’s Stillwater we get multiple shots of the middle-aged American consuming fast food abroad—being duped by one false promise after another of a new star. But Stanley’s true ambition is to be a coach and he seems to finally be approaching his dream when an assistant position opens on the team. Yet complications arise with the 76ers’ ownership when their longtime head honcho (Robert Duvall) dies, leaving it temporarily in the hands of a temperamental executive (Ben Foster) who’s always been suspicious of Stanley’s potential. Yet a possible gamechanger occurs when he stumbles upon an extremely impressive streetball player, Bo Cruz (Utah Jazz star Juancho Hernangómez) while on a scout in Spain. Thinking he’s found the golden ticket that will climb him up the ranks of the organization, Stanley flies him to Philly to see if he can qualify for the draft.

Between Stanley’s briefly sketched relationship with Duvall’s departed owner and his mentorship of Bo, father figures loom large in Hustle, but you don’t feel much emotional weight, even as the player’s hothead attitude and past transgressions breed some second-into-third act tension. Partly it can be because Sandler’s restrained performance also results in a bit of a lack of chemistry between the two (as well as Queen Latifah playing his wife). The film seems almost more about maintaining (or rather asserting) Sandler’s gentle family-man image against the weird divergences of contemporaries such as Johnny Depp, Brad Pitt, and Tom Cruise, making it rather odd as a feat of middle-aged male vanity.

A further struggle in dramatic stakes is that it seems fearful of offending the NBA; there are, after all, about a dozen players as themselves in addition to LeBron James serving as producer. A knottier film likely would’ve gotten into the intricacies of the league’s overwhelming corporate structure and how it affects players (if one need not look further than the drama surrounding the threatened labor strike during the 2020 season) as opposed to framing everything around one bad apple in the organization threatening Stanley’s success. It’s almost like the film serves as unconvincing propaganda for two separate brands.

Hustle opens in theaters on June 3 and arrives on Netflix on June 8.