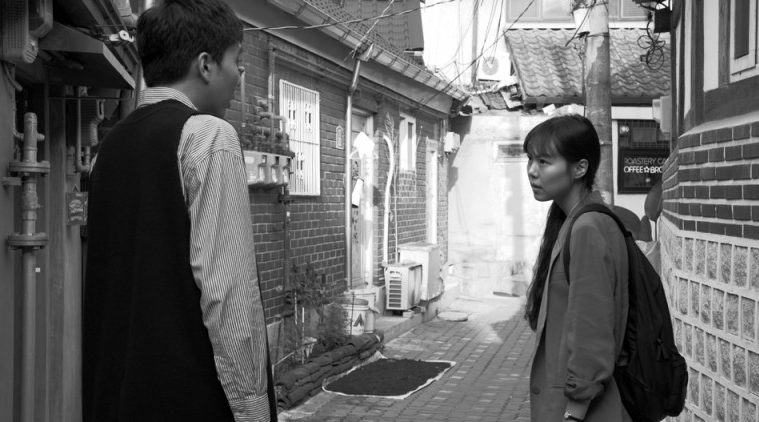 Despite a filmography that includes over 20 features, it’s only been in recent years that prolific South Korean director Hong Sangsoo has gotten his due in terms of U.S. distribution. This can be greatly attributed to Cinema Guild, who have released all three of his 2017 features: On the Beach at Night Alone, Claire’s Camera, and The Day After. We’re thrilled to now exclusively announce that the company has picked up Grass following its premiere at the Berlin International Film Festival earlier this year. Set for a release in 2019, read their synopsis below.

For his 22nd feature as director, Hong delivers a delicious cinematic riddle only he could concoct. In the corner of a small café, Areum (Kim Minhee) sits typing on her laptop. At the tables around her, other customers enact the various dramas of their lives. A young couple charge each other with serious crimes, an old man tries to rekindle a flame with a younger woman, a narcissistic filmmaker works to put together his next project—all while Areum types. Is she merely writing what she hears? Or is she hearing what’s been written? As the dramas inside the café unfold, the plants outside grow taller.

With stately black-and-white cinematography from Hong regular Kim Hyungkoo and a wide range of performances from an outstanding ensemble, Grass is a truly singular chamber piece, a beguiling combination of raw emotion and philosophical intrigue.

“Grass is a film that continually surprised at every turn,” said Cinema Guild’s Peter Kelly. “Our recent releases have shown that there’s an ever-expanding appetite for Hong’s work and we think audiences will eat Grass right up.” The deal was negotiated by Peter Kelly of Cinema Guild with Youngjoo Suh of Finecut. Rory O’Connor said in our rave review from Berlinale, “Hong is generally at his best when examining how men and women interact and this setting allows him to once again put those subtleties and idiosyncrasies at the front of his lens or, perhaps more accurately, under his microscope.”