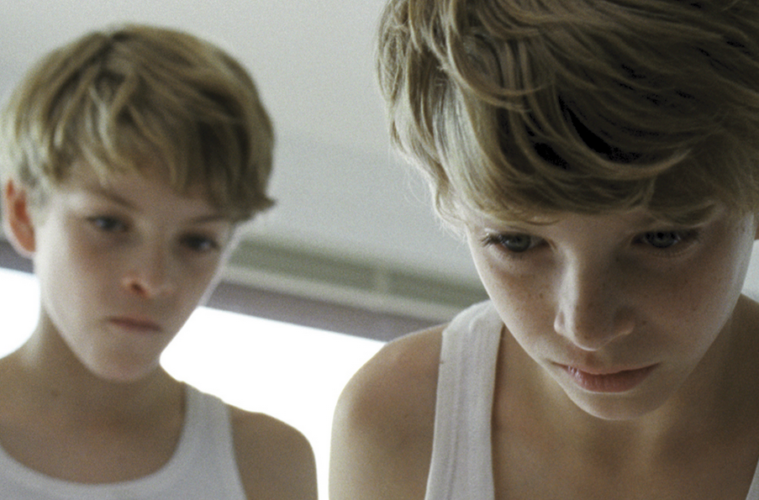 ‘Goodnight Mommy’ Directors Talk Not Depending on Twists, Shooting Horror with Children, and More

While it might be hard to imagine, with the trailer for Goodnight Mommy making waves weeks ahead of its theatrical release, there was a time when the little Austrian film had very little hype or recognition. Nearly a year ago it was in a packed secret screening during Fantastic Fest that I was exposed to the film from writer/directors Severin Fiala and Veronika Franz and it made quite an impact. My review out of the festival was purposefully vague but highlighted the moments that truly stayed with me. To get you up to speed, the basic premise is that two young twins come home to a mother that has recently had plastic surgery, bandaged face and all. They become curious because of the change in her appearance and wonder if she truly is their mother. With no one to intervene while the mother is on bed rest, they decide to find out to horrific results.

Right after a busy trip to SXSW in March I was given the opportunity to talk to the duo behind the film and jumped at the chance.  What I can confidently say is that the film has stuck with me nearly a year later and that says more about the quality than anything else. This was also before the hype, so it was under the guise of still bubbling anticipation of a mild release that I talked to Fiala and Franz, who were in excellent spirits earlier this year. Together we discussed how much they pulled back from the horror aspects while working with the two young boys, what they were attempting to achieve with the color contrasts and the prevalence of white, the fact that they weren’t at Fantastic Fest for the secret screening, and what they did to make sure the film stands beyond just a twist or surprise. You can find the full conversation below.

The Film Stage: You’ve never been to Texas?

Franz: I was really looking forward to going there. But they didn’t invite us to the Fantastic Fest.

[Laughs] You all were a secret screening during Fantastic Fest.

Franz: Yeah, they didn’t even tell us! Only afterwards did we kind of find out by reading the reactions on the internet.

Severin Fiala: We were pinching ourselves while the reactions were coming in.

Well, I don’t know if you heard how the film was introduced at Fantastic Fest. Had you heard this story?

So, Tim League, the founder of the Alamo Drafthouse and the co-founder of Fantastic Fest, introduced the film at the screening and told the crowd that he loved it but would keep his wife away from it at all costs.

What’s even more fun is that they actually have two girls. And I’m not sure if they’re twins but they’re very similar in age.

Franz: We know that Drafthouse also wanted to buy the film.

Fiala: Yeah, they wanted to distribute it.

So, Radius ended up with it?

Fiala: Yeah, they saw it in Venice and were faster. They bought it immediately, actually. Which is unusual for an Austrian film and we’re really grateful for that.

The film has Lukas and Elias as the two young boys. And that is both their real name and character names. I’m always curious about a situation where the character names are the same. Was that always the case here or did you have different names in the script originally? They are, what, 10?

The film deals with body horror at certain points. Was there anything that you had to step away from? You get away with a lot of stuff in front of these two kids.

Fiala: No, no. We didn’t step away from anything. We just tried to imagine how far two children eventually would go and there are little boundaries because it is the most existential question for them to find out where their real mom is. So I think children would go extremely far. As far as the borders, we didn’t want them to enter fantasy horror or take a chainsaw and chop their mother’s head off. I think the children wouldn’t do that. They would only use tools they know or they use in their daily lives. We wanted to keep it grounded.

But in terms of shooting these scenes it is more boring than you would imagine. And it’s rather technical to shoot these violent scenes because obviously the goal is not to really hurt anyone. So it has to be planned and executed quite carefully. So it’s more technically difficult than trouble for the children. The children didn’t feel uneasy shooting those scenes.

Franz: They refer to it as the best time of their lives. [Laughs].

I haven’t seen the film since Fantastic Fest in September and it’s now March. But I noticed that you had the boys dressed in white and the mom has the white bandages. There’s a bed with white sheets and even she is dressed in white at some points. There’s a lot of white. Is it just easier to sell the horror aspects of the film with the white getting grimier and such?

Fiala: I think the film is also about contrast. It’s about extreme light and extreme darkness. I think that interested us. It’s like two beings of the world colliding. The children and the mother. The mother is always in the house and it’s really dark and she is closing the blinds. The children are always in nature and floating camera movements and bright lights. When the children take over they rip down the blinds and it becomes very bright. So yeah, it’s a film about contrasts. But not just visually. Also, visions of the baroque, maybe.

Franz: Also, what the mother is wearing is more flesh-like than white.

A film like this presents some issues for reviews and even how you sell the film. You want people to watch with a blank slate, ideally. But with a twist and a few flourishes there is also the opportunity to add details and moments that you might catch on a rewatch. Did you integrate anything specifically in that regard?

Fiala: Yeah, there are some things hidden for viewers to see a second time. Our editor is a great fan of horror films and is a really intelligent person. We had great fun integrating some scenes, images, and details you would possibly only notice when you watch it the second time around. We wanted to make the film as rich as possible so you can watch it a second time and maybe even find something new in it beyond that.

Franz: But we also wanted the film to not depend on a twist. So even if you guess or know it earlier, the film should work anyways. Some horror fans are just going to be better at figuring it out so we tried to balance that.