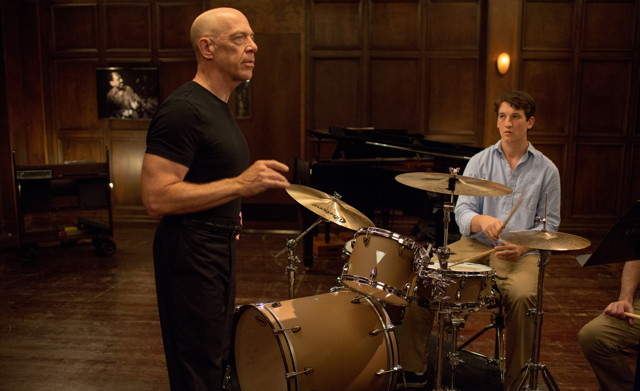 Get Jazzed Up With Energetic New Trailer For ‘Whiplash’ Starring Miles Teller and J.K. Simmons No feature this fall is arriving with a better festival journey than Whiplash. Directed by Damien Chazelle (helmer of Guy and Madeline on a Park Bench, writer of Grand Piano), the film premiered at Sundance, where it attained the top awards amongst the jury and the audience, before going to Cannes and will be stopping by Toronto followed by New York Film Festival, then finally arrive in theaters.

Following Miles Teller as a jazz drummer who practices under the guidance of J.K. Simmons, the first trailer was enticing, but an even better preview has arrived from overseas. Embracing the jazzy, energetic, and intense side of the film, it’s a great preview. Check it out below, along with a quote-filled theatrical poster. A pedagogical thriller and an emotional S&M two-hander, Damien Chazelle’s Whiplash is brilliantly acted by Miles Teller as an eager jazz drummer at a prestigious New York music academy and J.K. Simmons as the teacher whose method of terrorizing his students is beyond questionable, even when it gets results. Dubbed “Full Metal Jacket at Juilliard” at the Sundance Film Festival, where it won both the Grand Jury Prize and the Audience Award, Chazelle’s jazz musical was developed from his short film of the same name, which premiered at Sundance the previous year. The live jazz core that is fused with Justin Hurwitz’s ambient score, the blood-on-the-drum-kit battle between student and teacher, and the dazzling filmmaking will keep your pulse rate elevated from beginning to end. A kinesthetic depiction of performance anxiety—you don’t need to be a musician to feel it—Whiplash also presents us with a moral issue open to debate.