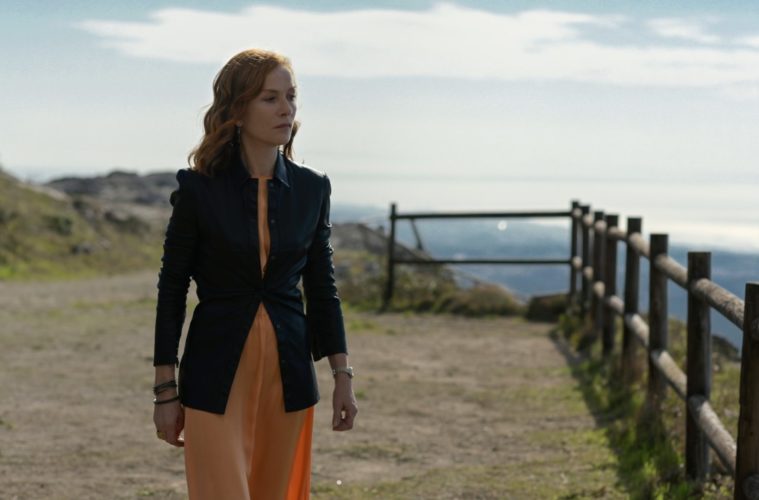 In Frankie, the scattered personae of an unconventional family gather in the seaside Portuguese town of Sintra for what might be the last time. The matriarch, as it turns out, is dying and so wishes to pass on some wisdom and maybe do a little match-making while she feels she still can. It is a heartfelt and modest work but an oddly languid one, a movie that asks the viewer to dig beneath the awkward, stilted topsoil of uneasy family reunion and find the tangled roots beneath. Question is, will you be bothered?

Isabelle Huppert plays that very matriarch, a famous actress named Francesca (or as her friends call her, Frankie) who’s recently had a cancer recurrence and now fears the worst, although you wouldn’t notice. Frankie begins her day with a topless dip in the hotel pool and later we’ll see her play piano, crack jokes, and possibly even get some. “Why are you dressed for a funeral?” she jabs at her ex-husband at one point. The rub here is that timeless truism that the ones who are dying are seldom the ones to bask in that misery.

Huppert is great at this, and of course she is. It’s elsewhere that the film falters. This is not by any failing of Huppert’s supporting players, per se, but in a strange lack of chemistry. The family is a hodge-podge of the sort that would make even Royal Tenenbaum blush. Along with Frankie’s now out-and-proud ex-bae Michel (Pascal Greggory), we meet her current husband Jimmy (a sad but ever-affable Brendan Gleeson in khakis); her stepdaughter Sylvia (Vinette Robinson), a woman as weighed down with carry-on luggage as she is with her failing marriage; and Frankie’s hapless son Paul (Jérémie Renier), whose fine mustache cannot hide the disappointment of an overly-privileged life. Also arriving is Frankie’s on-set stylist and confidante Irene (Marisa Tomei), a character who promises much–first by rejecting a marriage proposal from her lame boyfriend (a perfectly cast Greg Kinnear) and later during her all too few scenes with Huppert–but ultimately feels underused.

Directed by Ira Sachs, a filmmaker as at home to heartbreak as he is to New York City, this is his first feature to be shot outside the east coast metropolis and, with the greatest respect, it shows. There are definite shades of Richard Linklater to all this. The great Texan filmmaker was another to feel the pull of sleepy European cities and the strange things they do to romance, yet the Before films would not have worked were it not for the delicate balance he found between Ethan Hawke’s wide-eyes and Julie Delpy’s rolled ones. Sachs never quite cracks it, if not for want of trying. Huppert is the Delpy-like realist here surrounded by dreamers and romantics, mopey selfish people with no right to be. On paper that should work a charm, but the disparity never quite rings true and not for a second did I believe that there was any history between these people, let alone the unspoken warmth and battle-scars of hard-earned love and shared experience.

I can’t say that I loved Keep The Lights On, Sach’s breakout debut, but his two features that have followed (Love is Strange and Little Men) have been among the very best of their respective years. At the end of Keep The Lights On one lover, scarred by years of addiction and doomed romance, turns to the other and says, “We had some great times, didn’t we?” which, at the time, came as news to me. Indeed, the film to that point had been a rolling tragedy and that tendency to tell without showing is apparent once again here. At various points we are informed that Frankie is “always” doing this or that which we never really see. The film tries so hard to position Huppert’s character as something larger than life, a shadow under which these characters must now come to terms with no longer living in. The movie’s failing is that you never quite believe it.

Frankie premiered at Cannes Film Festival and will be released by Sony Pictures Classics on October 25.