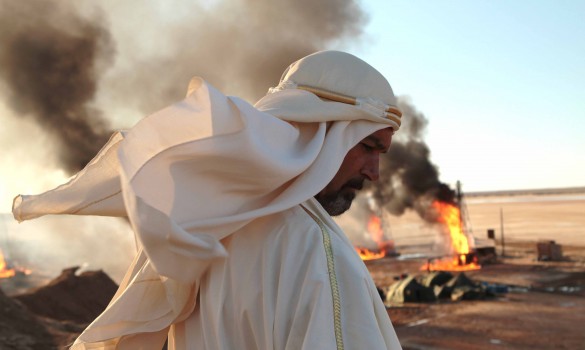 After not being involved with a decent film in nearly a decade, Antonio Banderas is back on the saddle figuratively with Pedro Almodóvar‘s excellent The Skin I Live In, then literally with Jean-Jacques Annaud‘s Black Gold. The director of Seven Years in Tibet and Enemy at the Gates returns for this desert sand epic which features a fantastic including A Prophet‘s Tahar Rahim, Freida Pinto and Mark Strong as his usual evil self, albeit bearded.

First Showing, who provides the trailer, is spot on when he says this looks like Lawrence of Arabia meets There Will Be Blood. There are specific style homages to both here and it looks like it could give that rare old Hollywood feel, being shot all on location in the Sahara. Check it out below. Set in the 1930s Arab states at the dawn of the oil boom, the story centers on a young Arab prince torn between allegiance to his conservative father and modern, liberal father-in-law.

There is no US distribution for Black Gold yet.