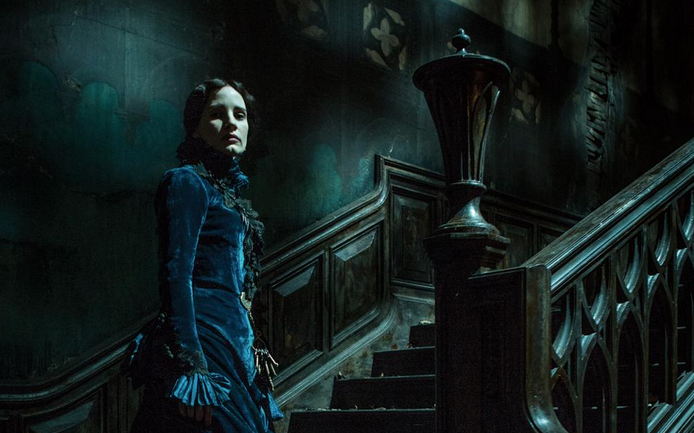 Following up his biggest undertaking yet with Pacific Rim, Guillermo del Toro is going back to his horror-tinged roots in Crimson Peak, led by Jessica Chastain, Tom Hiddleston, Mia Wasikowska, and Charlie Hunnam. Hopefully the ideal Halloween treat, the gothic horror story follows an author who finds out her husband has some secrets — all in a haunted house.

“Crimson Peak is a much, much, much smaller movie, completely character-driven,” del Toro tells STYD. “It’s an adult movie, an R-rated movie, pretty adult. Shockingly different from anything I’ve done in the English language. Normally, when I go to do a movie in America for the spectacle and younger audience, for Blade or whatever. This movie’s tone is scary and it’s the first time I get to do a movie more akin to what I do in the Spanish movies.”

Said to have moments that include “very visceral, physical violence,” get a peek below thanks to the debut of the first trailer, which shows off the film’s immaculate design and a hint of the story.

Legendary Pictures’ CRIMSON PEAK, a co-production with Universal Pictures, is a haunting gothic horror story directed by the master of dark fairy tales, Guillermo del Toro (Pan’s Labyrinth, Hellboy series, Pacific Rim), written by del Toro and Matthew Robbins and starring Mia Wasikowska, Jessica Chastain, Tom Hiddleston and Charlie Hunnam. In the aftermath of a family tragedy, an aspiring author is torn between love for her childhood friend and the temptation of a mysterious outsider. Trying to escape the ghosts of her past, she is swept away to a house that breathes, bleeds…and remembers. Thomas Tull, Jon Jashni, del Toro and Callum Greene produce, and Jillian Share executive produces.