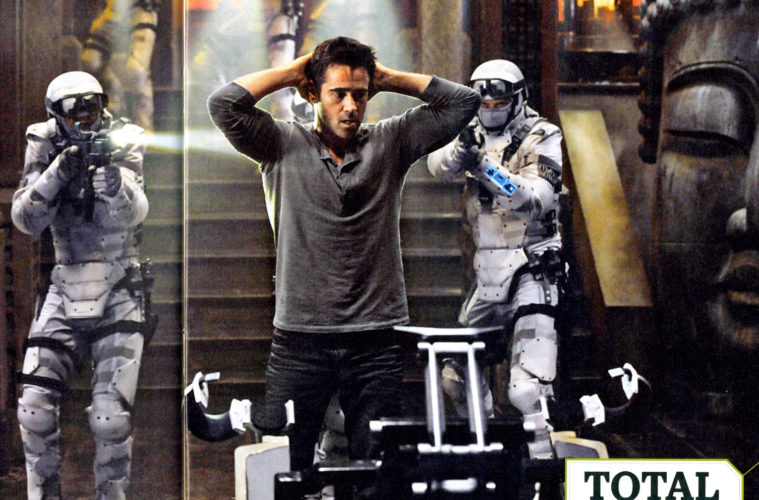 We recently saw Toronto set photos from Sony’s $120 million budget Total Recall update, but now the first official image has arrived via Entertainment Weekly (not online yet) featuring a captured Colin Farrell. Directed by Live Free or Die Hard‘s Len Wiseman and scripted by Kurt Wimmer, Mark Bomback, and James Vanderbilt, the film also stars Bryan Cranston, Bill Nighy, Kate Beckinsale, Jessica Biel, and John Cho. You can check out the image above and click for hi-resolution, with more details below.

In the magazine, Farrell says “the tone will be much less jokey” than Arnold Schwarzenegger‘s 1990’s sci-fi hit. He says, “there’s not as much tongue-in-cheek” and that he wouldn’t feel comfortable delivering lines like ‘Consider dat a divorce!'” We know “the new story involves nation states Euromerica and New Shanghai, with Douglas Quaid (Farrell) a factory worker in the latter who begins to believe he is a spy, although he doesn’t know for which side.” Cranston plays Vilos Cohaagen, “the leader of Euromerica who, under the cover of protecting his people, is secretly readying an invasion of New Shanghai.”

The magazine also gives us new, smaller looks at James McTeigue‘s The Raven featuring John Cusack and Luke Evans, which hits theaters March 9th, 2012. There is also new looks at the recently retitled Underworld: Awakenings, hitting theaters on January 20th, 2012 and featuring Kate Beckinsale. Then there is a new image of Andrew Niccol‘s In Time starring Justin Timberlake and Amanda Seyfried. Niccol told the magazine that “There’s a lot of running in this movie because people are literally running out of time. I think Justin will be look at in a totally different way after this film. Don’t be surprised if you suddenly have Justin Timberlake as an action hero. That film hits theater October 28th, 2011. Check out the images below. What do you think of our first look at Wiseman’s film? What about the others?