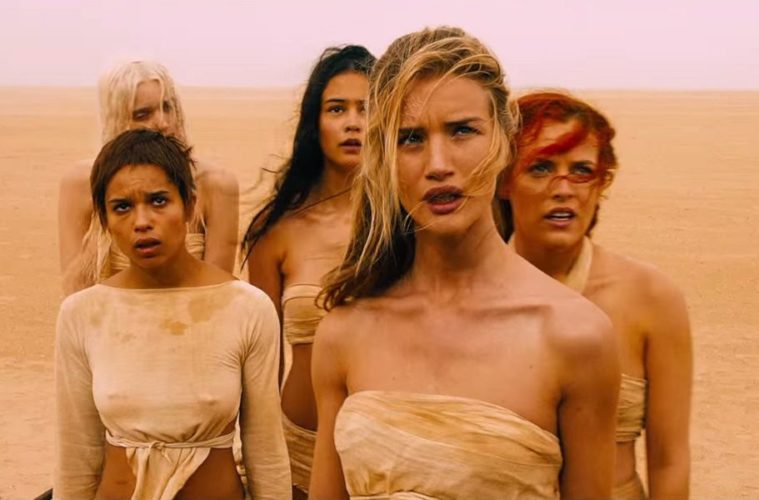 After singling out the great breakthrough performances of the year, it’s time to turn our eyes to the ensembles. Whether it’s a small supporting role or the leading gig, the decisions of a casting director are vital to a project’s success. This year saw a number of flawless casting line-ups, from overlooked dramas to some of 2015’s most-celebrated films. Check out our list of ten favorites and let us know yours in the comments below.

The Assassin is first and foremost a film belonging to Shu Qi — Hou Hsiao-hsien said as much when I interviewed him earlier this year — but a work of such lyricism requires more than one player. Because her Nie Yinniang floats over the film, always spoken of and most often appearing for the quick strike before receding, the fear that’s established by this picture’s co-stars — especially Chen Chang, who sometimes makes this feel like a lost segment of Hou’s Three Times — are what truly bind its many moving parts. Just keep your eyes open to remember who’s who. – Nick N.

While most of Carol is a two-hander between Rooney Mara and Cate Blanchett — or variations of this, with each of the leading ladies acting opposite other players such as Kyle Chandler, Jake Lacy and Sarah Paulson — one always gets a sense that each of these characters have long inhabited each other’s worlds. This is why, for instance, when we see Carol (Blanchett) giggling over “redheads” with her best friend Abby (Paulson), we don’t need long expository scenes, but instead just a soft smile, or a gleeful glance, to let us know these women truly know and love each other. Or when Therese’s (Mara) boyfriend (Lacy) refers to her as “Terry,” we know she’s simply given up on correcting him. In scenes where more than two actors interact — like that slow-burner between Mara, Blanchett, and Chandler that breaks the heart more than anything — all bets are off, but Todd Haynes knows better than to devastate us as often. – Jose S.

Spike Lee’s best picture in years is quite simply electric on every level, from a smart script to brilliant work in the casting department. Fronted by Teyonah Parris as Lysistrata, a women we’re told by our narrator (none other than Samuel L. Jackson) is the kind of sexy black women that could change the minds and hearts of George Zimmerman and Darren Wilson, as a revolutionary who encourages women on both sides of a gang war to withhold sex until the men of Chicago stop killing each other and their children. Nick Cannon — a long way from Drumline and Love Don’t Cost a Thing — does some of his best work as the title character, a gangster turned rapper or vice versa –Also in the mix are rival gang member (Wesley Snipes), a peaceful voice of reason (Angela Bassett), John Cusack as a local preacher who brings the film to a standstill with a powerful sermon, and Jennifer Hudson in a heartbreakingly close to home role as woman whose lost her daughter in the bloodshed. Ambitious and timely, the performers of Chi-Raq give their all to a cause that transcends the film’s narrative and at times, the limits of cinema. – John F.

It’s telling that, for everything written and said thus far, no consensus favorite has been established among The Hateful Eight‘s ensemble. Maybe it’s because there are multiple synchronizations at play: Quentin Tarantino’s eighth feature is populated almost exclusively by horrible people, and a big part of its entertainment value — to determine the specifics of their individual horribleness — is as much an actor-to-actor balance as it is a dance between performer and material. When photographed on 70mm and in a 2.76 aspect ratio, they’re given nowhere to hide: whether crammed into the side of a frame or showing the many layers of a single facial expression in a close-up, their presences are so intimate that it might even induce a bit of Stockholm Syndrome — making Eight’s climax all the more difficult to stomach. – Nick N.

While the world of Mad Max: Fury Road is something to behold, the real selling point that elevates the film beyond something merely fun and campy are the actors filling out the scenery. Everyone is giving an interesting, lived-in performance here, whether it’s Hugh Keays-Byrne as the larger-than-life Immortan Joe, the crazed Max Rockatansky played by Tom Hardy, who can say more with just a look and a growl than most people do with entire lines of dialogue, or Charlize Theron using a stoic but unbreakable desire to escape with her precious cargo. Meanwhile, Rosie Huntington-Whiteley is actually missed when she is no longer part of the action as Splendid. But perhaps one of the true standouts in the film is Nicholas Hoult, who plays one of Immortan Joe’s War Boys, Nux. He is wild-eyed and dedicated until he makes a turn in the film. Indeed, he has the biggest arc, pulled off with aplomb by the ever-reliable Hoult. There’s a serious tone to the film that is carried on the shoulders of the actors in the middle of all this chaotic action, and it is because of them the film is so endlessly fascinating. – Bill G.

In the last few months, there’s practically been a Magic Mike XXL renaissance as a gush of critical writing has heaped praise on the sex-positive celebration of heaving bodices and masculine brotherhood. It’s centered on the (admittedly fantastic) scenes like Joe Manganiello‘s perverse convenience store serenade or Channing Tatum’s now-old-hat ability to communicate pathos through seeming osmosis, or Andie MacDowell’s best role in a decade. But Magic Mike XXL is filled with faces that are perfectly suited to this story of consensual hedonism, and, more importantly, people who can really sink into the story. Donald Glover is still finding his place as an actor, being placed in roles that combine his braggadocio and high-key enthusiasm to poor ends. But as Andre, the freestyle crooner, he’s relaxed and sounds completely natural talking about karma and spiritual pleasure. Matt Bomer is an actor who appeared at home with the downer vibes of the first Magic Mike, but here he slides right into the role of the gooey heartthrob. And while men crowd the frame with their egos, this is a film inherently about serving women, however you want to define the term “serve.” The film responds in turn, presenting women who tower over these men. Jada Pinkett Smith’s Rome already runs one of the most seductive set-pieces of the entire film, but her performance isn’t merely a symbol. She chooses her words carefully, enunciates each syllable, and oozes into her own regal sexuality. Amber Heard has unfortunately inherited the mantle of Cody Horn-hate, bringing a comparable worn-down, cold-to-the-touch intimacy, but she’s just as capable of little moments of electricity in her line readings (the cake scene, for example). And while she only appears in one scene, Elizabeth Banks just brings a sly, knowing joy to her line readings. Whether it’s Gregory Jacobs’ pristine but shaggy direction or the sheer enormity and chemistry of this cast, there’s never a second where it feels like there’s anything less than a shared lifetime between all of these characters. – Michael S.

Greta Gerwig is the new Auntie Mame we never knew we needed in Noah Baumbach’s bittersweet coming-of-age tale Mistress America. Playing the impossibly named Brooke Cardinas, Gerwig struts down the bright red steps on Times Square, like Rosalind Russell did in her lavish apartment in the 1958 classic. She’s living in an alternate reality of sorts, a place where people ought to have style, humility, and kindness in order to fit in. That no one ever lives up to her standards is obvious, but some of the characters spend the entire film trying, and the cast plays it out like they were in You Can’t Take It With You or some zany Capra-esque comedy. Baumbach is smart enough to let the action unfold with minimal camera moves, and there are scenes that progress like a stage show, in which actors like Michael Chernus, Lola Kirke, Jasmine Cephas Jones, and Heather Lind unravel like theater creatures. – Jose S.

Mustang blew me away because while the story is entirely relevant to the world today, it is the cast that makes you feel for the girls at the heart of it. It follows five young sisters (Güneş Şensoy as Lale, Doğa Doğuşlu as Nur, Elit İşcan as Ece, Tuğba Sunguroğlu as Selma, İlayda Akdoğan as Sonay), all orphaned and being raised by their grandmother and uncle in Turkey. When they are caught having harmless fun with some boys at a beach, they are chastised and punished by their conservative uncle and grandmother. The youngest of the five sisters is Lale, played by Şensoy, who is the stand-out here, being the focal point of the narrative. France’s Oscar entry manages to touch on the budding sexuality of the young girls who are quickly married off, one by one, to suitors barely able to remember their name. With five young girls it would be easy to get lost and confused as to who each of them are, so it speaks volumes that they each quickly become distinct personalities and easy to identify. – Bill G.

It’s easy to look at the cast of Sicario and expect something highly entertaining, but what was unexpected was how unsettling the entire experience ends up being. There’s Emily Blunt as Kate Mercer, a young and naive FBI agent thrown into the world of the the drug war near the US-Mexico border. She is quickly in over her head, with very little information coming from Josh Brolin or Benicio del Toro’s higher-ups. It’s that barely floating feeling that perpetually consumes Denis Villeneuve’s thrilling horror film as the audience is kept off-balance again and again. It understands that an inherent likability of Brolin’s makes us want to trust him despite the lies he tells. We, as an audience, have also learned that you simply can’t touch Blunt. So it is excellent casting to put them in positions to break what we might consider a given. But it’s del Toro that begins to shine, playing a wild card that doesn’t show his hand until he goes into full-on superhero mode in the last quarter of the film, proving that he wasn’t just talking a big game. Small moments truly separate the cast, such as when del Toro gives the always-shady Jon Bernthal a wet willy that bridges the gap between authority and middle-school bully. – Bill G.

Tom McCarthy’s procedural moves with the precision of a fine timepiece. Rarely does one find a film where all is tune, from the pacing, writing, direction and acting. Highlighting the heroic work of the Boston Globe’s Spotlight team, the group is headed by Robby Robinson (Michael Keaton) who risks life long friendships to get the story right. His team includes Mike Rezendes (played by a compulsive Mark Ruffalo), Sacha Pfeiffer (Rachel McAdams) and Matt Caroll (Brian d’Arcy James). Encouraged by a Boston outsider, editor Marty Baron (Live Schreiber), the team undertakes a long-term investigation of abuses in the Catholic Church. In the mix are the lawyers on both sides, played by Stanley Tucci and Billy Crudup. Rightfully overshadowing that other journalism docudrama, James Vanderbilt’s incompetent Truth, the difference here amongst many things is perhaps access: instead of impersonating the spotlight team, Keaton, Ruffalo, McAdams, and James build textured, multidimensional characters. – John F.

What are your picks for the best ensembles of the year?