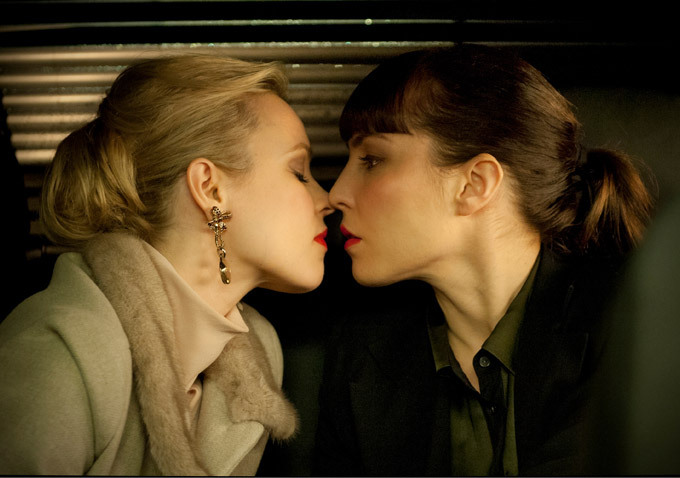 While his classic Carrie gets the remake treatment, Brian De Palma is paying no attention as he continues work on his first feature in over half-a-decade. Passion stars Rachel McAdams, Noomi Rapace and Dominic Cooper, and we’ve got our first look today. Based on the 2010 French film Love Crime, the final work from late director Alain Corneau, it follows two women competing for power at a large conglomerate.

Judging from this first still, part of this competition will involve some heated intimacy, not uncommon for the director and something we’re quite looking forward to him returning to. Check it out above, along with an official synopsis below thanks to The Playlist.

An erotic thriller in the tradition of “Dressed To Kill” and “Basic Instinct”, Brian de Palma’s PASSION tells the story of a deadly power struggle between two women in the dog-eat-dog world of international business. Christine possesses the natural elegance and casual ease associated with one who has a healthy relationship with money and power. Innocent, lovely and easily exploited, her admiring protégé Isabelle is full of cutting-edge ideas that Christine has no qualms about stealing. They’re on the same team, after all… Christine takes pleasure in exercising control over the younger woman, leading her one step at a time ever deeper into a game of seduction and manipulation, dominance and humiliation. But when Isabelle falls into bed with one of Christine’s lovers, war breaks out. On the night of the murder, Isabelle is at the ballet, while Christine receives an invitation to seduction. From whom? Christine loves surprises. Naked she goes to meet the mystery lover waiting in her bedroom…

Expect Passion to be on the Cannes marketplace and hopefully see distribution and a release by the end of the year.