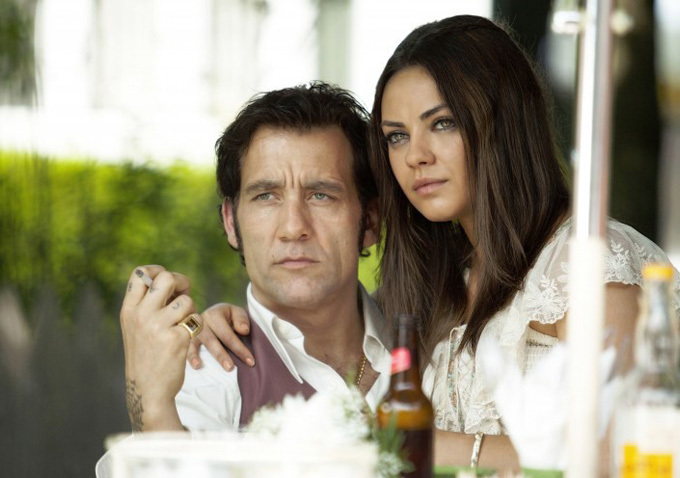 After emerging in the world of television with That 70’s Show, Mila Kunis has quietly climbed the ranks of Hollywood, and as of late, been featured in a number of eclectic projects. From Darren Aronofsky‘s Black Swan to R-rated comedies like Ted to family friendly Disney films such as Oz the Great and Powerful, her varied career will continue as we’ve got updates on a few upcoming projects featuring the actress.

First up, the debut batch of images from the next drama by Guillaume Canet (Tell No One) have landed. The crime story Blood Ties takes place in a 1970s Brooklyn and sees Kunis alongside Rust & Bone stars Matthias Schoenaerts and Marion Cotillard, as well as Zoe Saldana, Clive Owen, Billy Crudup and James Caan. The remake of the 2008 thriller follows two brothers who are different sides of the law that team together and we could see the film pop at Cannes.

Following that film, Kunis will be leading the next project from the Wachowskis, Jupiter Ascending, which sees the duo staying in the world of science-fiction. Starring alongside Channing Tatum, Sean Bean, Eddie Redmayne, Doona Bae, Douglas Booth, Tuppence Middleton, Tim Pigott-Smith and James D’Arcy, WB have now released a new synopsis (complete with some hilarious character names), which can be seen below, along with the rest of the Blood Ties images (via Kinopoisk).

From the streets of Chicago to far flung galaxies whirling through space, Jupiter Ascending was conceived and written by the Wachowskis, who are also directing. Award-winning producer Grant Hill, with whom the writer/directors have collaborated since “The Matrix” Trilogy, is producing the film together with the Wachowskis. Roberto Malerba and Bruce Berman are serving as executive producers.

Jupiter Jones (Mila Kunis) was born under a night sky, with signs predicting that she was destined for great things. Now grown, Jupiter dreams of the stars but wakes up to the cold reality of a job cleaning toilets and an endless run of bad breaks. Only when Caine (Channing Tatum), a genetically engineered ex-military hunter, arrives on Earth to track her down does Jupiter begin to glimpse the fate that has been waiting for her all along – her genetic signature marks her as next in line for an extraordinary inheritance that could alter the balance of the cosmos. Expect Blood Ties to land by the end of the year, while Jupiter Ascending arrives next summer.