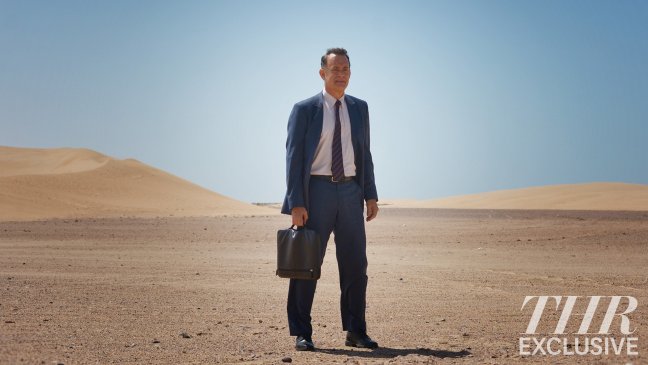 First Images of Tom Hanks In ‘Hologram,’ Brit Marling In ‘The Keeping Room,’ Saoirse Ronan In ‘Brooklyn,’ and More

As Cannes is officially underway, it means the cinema world is converging in one place and attempting to shop their latest features to the globe. With this comes the debut of first look images from a number of upcoming projects. Today we have a new batch and first up, above, one can see Tom Hanks in Tom Tykwer‘s adaptation of Dave Eggers‘ A Hologram for the King. The comedic drama follows the journey of American salesman (Hanks) who ventures to Saudi Arabia to conduct business and we expect it’ll be released next year.

Next up, the first image has dropped of Saoirse Ronan and Domhnall Gleeson in Brooklyn, adapted from Colm Toibin‘s novel by Nick Hornby and direction by John Crowley (Boy A, Closed Circuit). Ronan leads the story about a young woman’s emigration from Ireland to America in the fifties, caught in the middle of two romances, and we expect a fall festival premiere. We also  have the first look at Hailee Steinfeld, Brit Marling, and Muna Otaru in the Civil War-set drama The Keeping Room. Also starring Sam Worthington, it’s directed by Daniel Barber (Harry Brown) and follows the story of three Southern women in the middle of the Civil War – two sisters and a slave – who must defend their home and family from a group of disbanded Union soldiers. It’s currently seeking distribution and one can check out the image below. Lastly, we have the first image of Ian McShane and Patrick Wilson in the thriller The Man on Carrion Road. Directed by Gonzalo Lopez-Gallego (Open Grave), the film follows McShane as a retired sheriff who brings his replacement (Wilson) along as they investigate a botched cartel deal. No word yet on premiere or distribution, but I’d imagine it’ll crop up on the festival circuit within the year. Which of the upcoming projects are you most looking forward to?