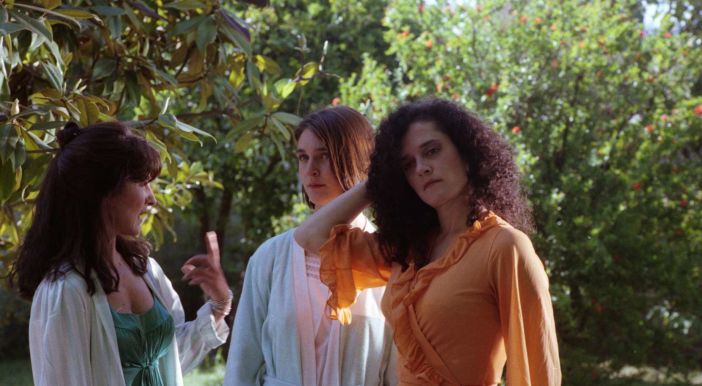 With a vast, bountiful filmography virtually unparalleled in cinema, Chilean director Raúl Ruiz helmed over one-hundred features before passing away in 2011 at the age 70. Considering he was so prolific, there were a few projects that never saw the light of day, one of them being The Wandering Soap Opera. Filmed back in 1990, the loving spoof of the telenovela was eventually completed by his wife and collaborator Valeria Sarmiento in 2017, where it premiered at Locarno Film Festival.

I had the chance to see the formally inventive, humorous spoof at Film Society of Lincoln Center’s retrospective last year and now Cinema Guild has now picked it up for a U.S. release, where it’ll bow at Anthology Film Archives on May 17. Ahead of the release–which we named one of our most-anticipated of the summer–we’re pleased to premiere the new trailer, which includes some love from Guy Maddin, who calls it “the purest and deepest of cinema’s dream.”

Rory O’Connor said in his review from the Locarno premiere, “It is a work that is packed to the brim with surrealist nods to the radical upheavals that were happening in the country at the time and also to that incomparably idiosyncratic medium, the telenovela itself. Ruiz’s film appears to suggest that as Pinochet stepped down from power, the politicians and Chilean people were acting as if they were in such a soap opera. The ability to truly understand this chaotic piece of work might rely on the viewer having knowledge of both the key figures involved and perhaps even the serialized TV shows themselves.”

See our exclusive premiere of the trailer below, along with the poster and synopsis.

Filmed by Chilean master Raúl Ruiz in 1990 but left unfinished until it was completed by his wife and collaborator Valeria Sarmiento in 2017, The Wandering Soap Opera is a dreamily interconnected series of vignettes that spoof on telenovela conventions while reflecting Ruiz’s feelings upon returning to his native Chile after more than 15 years away. In one episode, a man seduces a woman by showing her his muscles, which are actually slabs of raw meat slapped into her hand. Later, the man has a gun pulled on him when he accuses a poet of plagiarism. Meanwhile, through the television screen, five women have lost their husbands after an earthquake and embrace a better future together. All along, back and forth across screens, people are watching.

Shot in gorgeous Super 16mm and featuring one zany performance after another from a cast having the time of their lives, The Wandering Soap Opera is a glorious sendup of the telenovela, which, at the end of Augusto Pinochet’s dictatorship, Ruiz called the very best lens through which to understand “Chilean reality.”

The Wandering Soap Opera opens at NYC’s Anthology Film Archives on May 17.