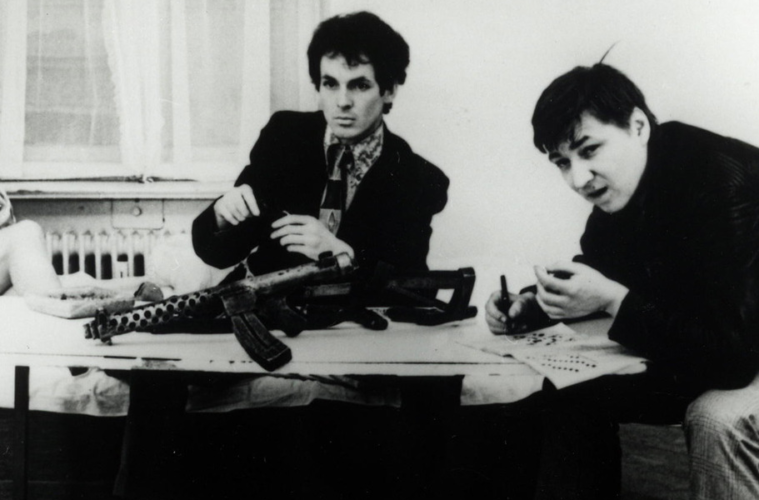 Early Fassbinder Hits Criterion: A Look at ‘Love Is Colder Than Death,’ ‘Beware of a Holy Whore’ & More

Rainer Werner Fassbinder — just saying his name feels towering in itself, so the German director’s astronomical oeuvre feels equally fitting. The frenetic auteur made over 40 films in the span of just barely over a decade (including the 13-hour Berlin Alexanderplatz, and not counting the stage and radio plays also developed), that Criterion’s latest Eclipse set, “Early Fassbinder,” feels like only the tip of the iceberg. But beginning with his debut feature and ending with his last film — before shifting toward an interest in Hollywood melodrama (five of the ten features made between 1969 and 1970) — “Early Fassbinder” feels like the key to unlocking the director’s major influences.

Here we see the teachings of Brecht and Munich’s Antiteater group, the echoes of the French New Wave, the love of American gangster pictures, and more. While not as accessible as major works like Ali: Fear Eats the Soul and The Bitter Tears of Petra von Kant, Michael Koresky argues in the liner notes that the films are “political and personal, confrontational and moving… bringing to light uncomfortable truths about his country’s legacy and postwar complacency.” In honor of this set, Danny King and I have provided capsules to compel you to seek out the works of the legendary director that are included in this essential box set.

The disjointed title might signal Godard, but the playful vision aims toward nihilism in Fassbinder’s rip on Band of Outsiders. A sparse prison-like opening could be its own vision of a Beckett play, while a series of flat shots in blank rooms suggest a Kafka parable. But Bruno’s (Ulli Lommell) attempts to convince Franz (Fassbinder) to “join the syndicate” are unconvincing, leading him to track him down to Munich and begin something of a ménage-a-trios with his girlfriend and occasional walker of the night, Joanna (Hanna Schygulla). Bruno’s trench coat, Franz’s leather jacket, and Johanna’s blonde hair feel like the cheap knock-offs of Bogart, Brando, and Monroe, respectively, while their adventures are similarly derivative: sunglasses are stolen, ammunition is acquired, murders are carried out, but without any excitement from either them or the camera, even as a soundtrack blasts punk rock.

The long takes lead nowhere, and the most tedious of actions, like disposing of a body, are drawn out to agonizing length. Franz notes a possible tail to their car and perhaps the chase that could follow. “Is that it?” he laments when they reach their destination without incident. It certainly is, as pessimism takes over, and the only thing left to do is fall in line with the rest of bourgeois society, zombie-crawling through a supermarket as high-pitched squeals dominate the soundtrack. The point is pointlessness itself; the relationship between the three forever strained as they move through the motions. The end of the narrative might be the inevitable tragedy, but was the adventure even worth it? The camera stays in place as the car glides away, the moaning of strings on the soundtrack note the only certainty of the future is perhaps despair. – Peter L.

A quotation from Yaak Karsunke to start: “It’s better to make new mistakes than to perpetuate the old ones to the point of unconsciousness.” A curious epigraph for a film predicated on static inaction. The opening places a man sitting in a stagnant car while passing-by traffic scoots through the frame, disrupting our access. But what follows from Fassbinder’s second feature (shot in a mere nine days) are the youths in naked emptiness without intrusion. The director’s long-take, stationary-camera aesthetic anticipates the rigor of Haneke, while a cruel, early sex scene with robotic gestures and workmanlike movement — he undresses, she arranges the pillows — could be a template for the Greek New Wave. For almost half the runtime, these anonymous, callous Munich dwellers (names hardly relevant) pass time with beer, cigarettes, gossip, and meaningless card games, all reflected in the chairs, railings, and tablecloths — a strict, geometrical mise-en-scene.

On the verge of running out of discussion topics, Fassbinder himself arrives in an uncredited performance as a foreigner, “a Greek from Greece” as one character describes him, looking to share the guest room of a local (Irm Hermann). Idle afternoon chatter shifts subjects, now centering on Fassbinder’s Jorgos, their remarks unfounded, unreasonable, and often nasty — a merciless depiction of xenophobia. Peppered throughout Katzelmacher (a word with many translations, but here used as a derogatory term for a foreigner) are musical interludes scored to Schubert during the film’s only tracking shots that follow two people down a sidewalk. But these moments are no reprieve: Fassbinder’s characters are still rotten, criticizing others and spreading rumors, never turning the microscope inward. – Danny K.

First image: a sign of Munich’s Stadelheim Prison; off-screen, a departing felon vows he’ll never return. Panning down, here is Franz (Harry Baer’s riff on Fassbinder’s same-named role in Love Is Colder Than Death) walking away – the leather trench coat, the moustache, the long sideburns. His opening line suggests reform, but the rest of the film is drift, drift, drift. He walks into a bar, turns on the jukebox, and dances with the waitress as the opening credits scroll across the screen. He reunites with Joanna (Hanna Schygulla), now a lover and a lounge singer; she lingers on his every gesture, while he keeps peeking towards the next scene. “Not so different from out here,” he remarks on the outside — the sentiment of someone with nothing to live for. He finds his brother, a painter, dead, his body strewn across a floor filled with old, crusty newspapers. The killer is the man known as the Gorilla (Günther Kaufmann, Fassbinder’s real-life lover), a friend of Franz’s. The director downplays this, the murder barely registering on the men’s occasionally erotic relationship, the prelude to a new love triangle when they bring Margarethe von Trotta to the country, leaving Joanna in the dust, bitter and betrayed.

The new trio — whose interpersonal dynamic fluctuates imperceptibly between platonic, heterosexual, homosexual, and familial — make plans for a small-time robbery. Baer sleepwalks through the movie, his eyes blank and unmoving, always staring beyond the frame toward some existential abyss. The blinding sunlight of Katzelmacher is replaced with Fassbinder’s instinct for noir, encouraging ballets with shadow and light. At times, the sheer diversity of the director’s aesthetic — tracking shots, overhead shots, pans, zooms, an overwhelming helicopter shot over a rural road — could be an attempt to awaken his main character. But it’s a hopeless task: there’s nothing waiting for Franz, no tangible goal or destination; he can’t even be considered a doomed romantic, because there’s no detectable passion in his female relationships. When the character finally meets his fate on the floor of a supermarket, Fassbinder doesn’t even have the mercy to end the film. There’s always more blood around the corner. – Danny K.

Before German dialogue is spoken, the opening shot might as well have been ripped from the best of American film noir: a sleazy blonde, gangsters playing poker, and a deep-focus, expressionistic room lit by a burning bulb in the center. Naked women cover the cards, striking one man’s fancy, but the game is all passing time before the score comes in. The center of this film is not an American, as described in the title, but a German (Karl Scheydt) on “business” from the country, also fresh from Vietnam. (“How was it?” “Loud.”) The crooked frames and brooding shadows feel reminiscent of Lang, Fuller, and Murnau, all name-checked as characters while Fassbinder recreates the films he loves. But the plot is more meandering and the kills more “foreign” — before the first hit, a long take as the victim ogles himself in the mirror.

Sexual tensions seem much higher than violent ones, especially a visit to a mom and brother whose passion goes beyond familial. The reasons for the murders go unremarked; like a good American, Ricky commits them because he is paid. “Nothing ever happens in Germany,” he remarks, but his killings set off the police chief, unaware that the gangsters behind it are his right- and left-hand men. “So much tenderness,” screams the rock soundtrack (written by Fassbinder and sung by Gunther Kaufmann), a recurring theme that haunts Ricky like the titular song of The Long Goodbye. By the end, the theme bellows out in a long take that seems to last for infinity, the film’s secret romance given its tragic moment in time. – Peter L.

Inspired by the troubled production of Fassbinder’s Whity (not included in the box set), the self-examining Beware of a Holy Whore offers an eruption of drunken arguments, misguided come-ons, and self-destruction, all in the name of artistic chaos. A film crew, stocked with Fassbinder regulars (Ulli Lommel, Hanna Schygulla, Margarethe von Trotta), kills time at a remote Spanish villa, knocking back drinks, conversing aimlessly, waiting for their budget-plagued director (Lou Castel) and star (Eddie Constantine, as himself) to arrive. The sharp, vibrant colors — velvet-red curtains, pink shirts, the potent green background of the opening credits — represent a vivacious shift from the director’s stark black-and-white work. The jukebox provides a tender juxtaposition to the film’s hostile moods, offering Ray Charles, Leonard Cohen, and Elvis Presley. Castel, playing the Fassbinder surrogate, offers a glimmer of his directorial vision in a mesmerizing tracking shot from cinematographer Michael Ballhaus, shooting one of his earliest features; his description of a planned murder scene — methodical, slow, and detailed — sounds like it comes from a true student of Hitchcock. But, off-set, Castel orders a fresh Cuba Libre with each passing minute, and the patient bartender even sweeps up the broken glass on the floor after Castel’s fit of sexual jealousy.

The meat of the film’s first half becomes clear: men and women walking across a room, confronting, arguing, beating. A 360-degree pan exposes the aftermath: empty chairs, a passed-out drunk, the entire emptiness of an evening composed for a single shot. In the morning, Fassbinder stages the crew’s commitment to the art with sweeping camera movements that present multiple planes of activity. But Castel can’t control himself. He descends further into an appalling psychological collapse, the stress of the shoot alienating himself from the people around him. His description of his own film: “It’s a film about brutality. What else would one make a movie about?” The final film before Fassbinder would transition into his Douglas Sirk-inspired melodramas, Beware of a Holy Whore remains an unrelenting document of what a movie set can look like when a wild, wicked-smart director believes only in brutality. – Danny K.

“Eclipse Series 39: Early Fassbinder” is now available for purchase at the Criterion Collection.